The Cult of the Covidians

Two separate (yet related) works today. First of all, after my experiment with Khoron Avir, Champion of Nurgle, which left me unsatisfied, I have repainted the mini. I should have stripped it and give the model a fresh start, but I was terrified that I could lose the green stuff work and the conversion itself. So I just covered the previous work.

Of course the result is not ideal (and that's an euphemism), but I think it has somehow improved from the previous version, so this is it. I will try better and fail better on future Nurgle Marines, but I'm not retouching this one again.

I still wanted it to look like a bulk of rust. I think I still have a long way until I get the point I want to reach, but I hope I'm on the right path. Future models will tell.

The second part of today's work is the plague zombies from the same Dark Imperium box. First thing I did was to cut the preposterous spikes away. Once again I think these models are waay over the top, so I changed their most characteristic element...

They reminded  me the zombies-whatever from The Expanse S1, and I didn't want to tak that path. These were going to be putrid, corrupted zombies, no more. But no less. That's more than enough, trust me.
I had to face a problem. There are two identical sprues. Unbearable. I will not suffer identical minis, that's a well known mantra on this blog. Sooo, once I had a cutter and glue, I just had to swap some heads, add a few bits and...

Here you have a bunch of pics. One mini is the (relatively) untouched model and the other one is the more obviously converted one: 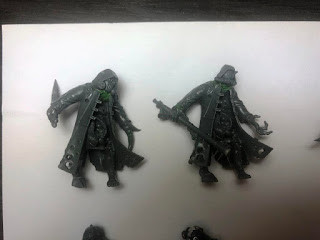 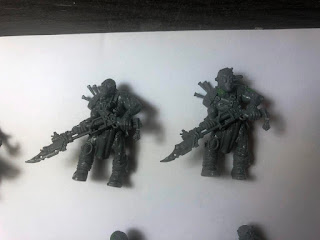 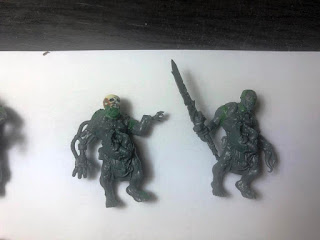 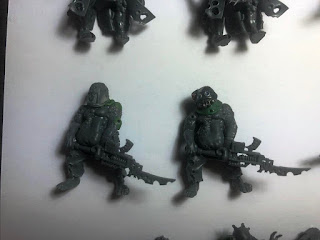 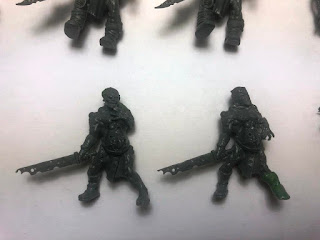 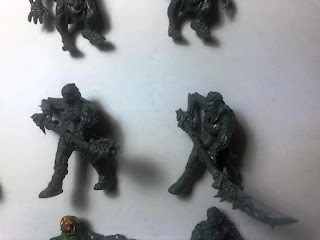 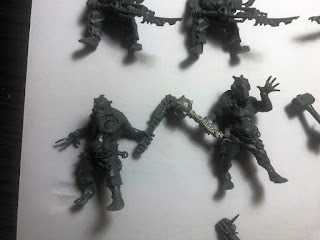 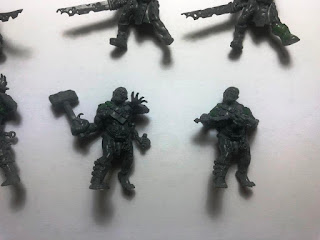 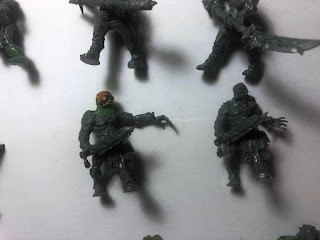 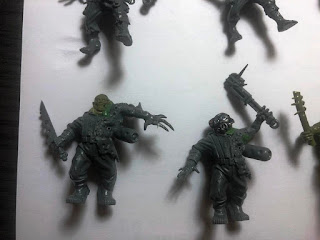 The Conquest ones were left mostly untouched, for they were different from the other ones. I only made minor coversions on a couple of them for variety purposes. 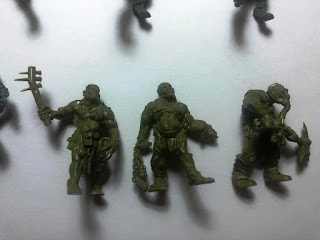 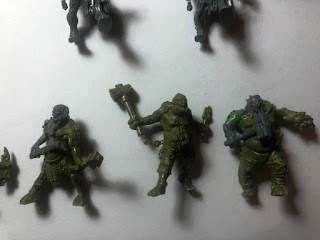 I would have preferred more industrial jumpsuits over loincloths, but honestly, I didn't have the time or the will to dress up so many minis. I have left the clothes as they are.

Ahhh, now the paintjob...
I wanted different skin tones. So I tried different hues and mixes of flesh and washes using green, purple and reddish brown.

Good enough for me. Let's go for the rest:

There are many different Cults and branches within Chaos worshippers. Some of them are well known, some of them are more obscure. Some interpretations say that the Nurgle symbol has a secret meaning. Some speak of the three spheres of Death. Death by air: suffocation, infections and diseases spread on the air, itches and the like. Death by water: drowning, blood infections, flesh melting or liquifying, any kind of blood spill. Death by earth: Rotting, decay, mouldering, decomposition. It is said that Nurgle does not enjoy flames, so there is no Death by fire. Nurgle hates Tzeentch's fire, the eternal representation of change which burns his own gardens. That explains the absence of flamethrowers in Nurgle's armies, often replaced by other kind of weapons.
It is uncertain where the Cult of the Covidians started. While its first manifestations came from the Eastern Fringe and then moved onto the rest of the galaxy, no branch of the Inquisition has been able to determine its true origin. They belong to the Sphere of Air and they spread Nurgle's blessings in the form of lung diseases. Those corrupted by their viruses soon start to show mutations of all kind, specially pustules and different ways of flesh rottenness. The infection can be swift and affect great masses of people in a very short period of time. The Ordo Hereticus works relentless to contain their vile presence on many Imperial systems, but they keep on spreading and spreading...

This is it for now. I hope you all are doing well; remember, stay away from Khoron Avir and the Covidians, by order of the Holy Inquisition!
Posted by Suber at 5.5.20