Inspiration comes from the unexpected. That can be specially true when you have a deranged mine such as mine and you see things where normal people doesn't.

On a second read, that sentence sounds quite more terrible than I expected. I guess I'd better explain myself.

Dry Paw Patrol stamp thingie from the Suberlings. If you don't see how this can be used for miniature purposes maybe there's still hope for you. Well, it's too late for me. I envisioned two little cargo platforms, a couple of gravitational mules.
You still don't know what the hell I'm talking about. I can't blame you. Just stay with me for a few more minutes.
First mule: I used the upper piece. After removing the sticker, I glued some junk together...

As the shape of the vehicle was kind of crude, I thought I could improve it with lollipop sticks.

This is one of those times when the execution reveals you didn't get the right idea. Having the bars like that it didn't look as I expected. Instead of the shape I was looking for, it looked like a weird sci-fi sleigh. Which of course is legit, but it simply wasn't the thing I was after this time. So I took the bars out.

This was the basic thing, a tiny platform to carry small goods. A kind of cargo land speeder commonly used on backwater settlemets, that kind of thing.

Let's have a look to what could be done with the other piece. Second mule:

This time the piece had quite a more interesting shape, it looked more like the hull of some barge or anything, so I thought I should add less bits and leave it more open.

I added a light on the front, a holster on the pole, because you never know when you can need a gun on the Dark Millenium after all, and tiny details here and there.

I declared myself happy with both and went on the next stage:

I painted them at a time, so I could save some time when it came to inks, metallics and so.

For the first one I opted for yellow:

I used a brown/orange mix for the second one instead: 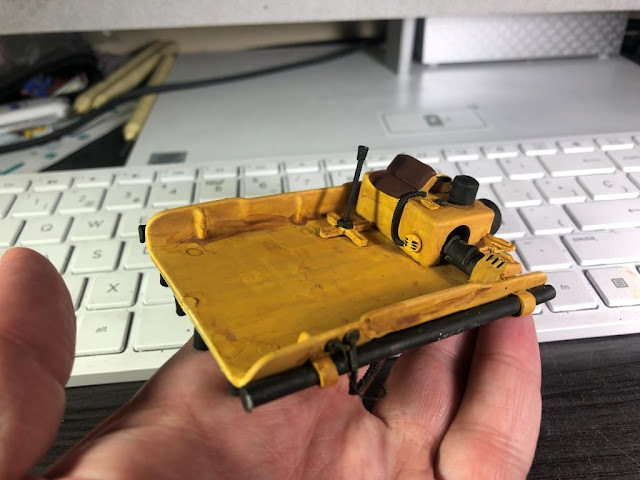 Well, not that much! After the inks and dirt, I had to tidy them up a little: 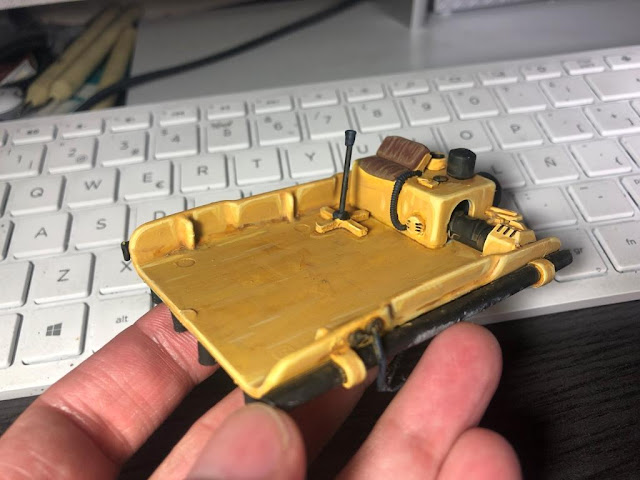 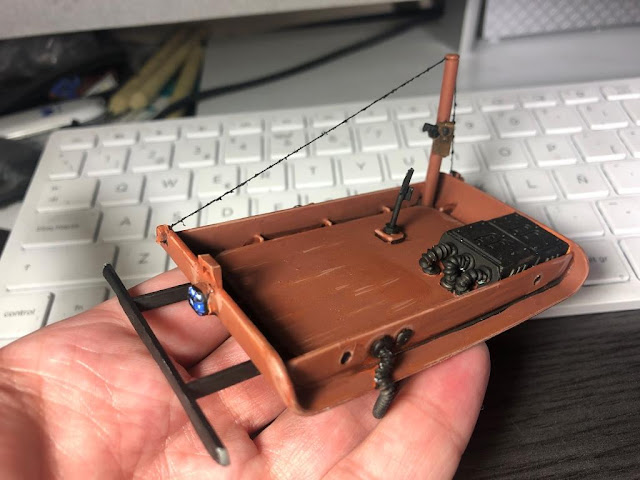 Much better. Now the metallics: 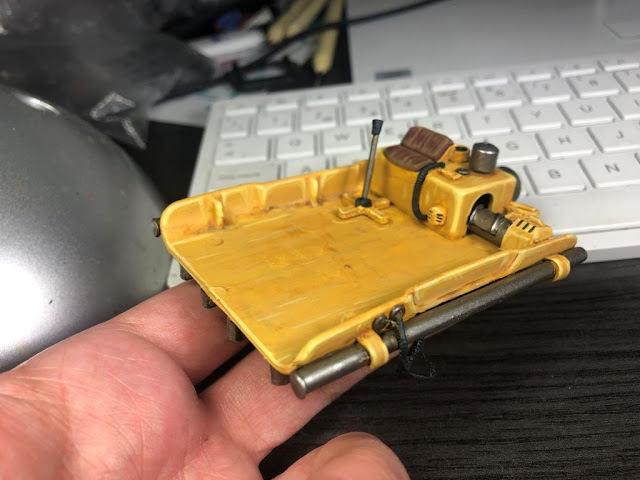 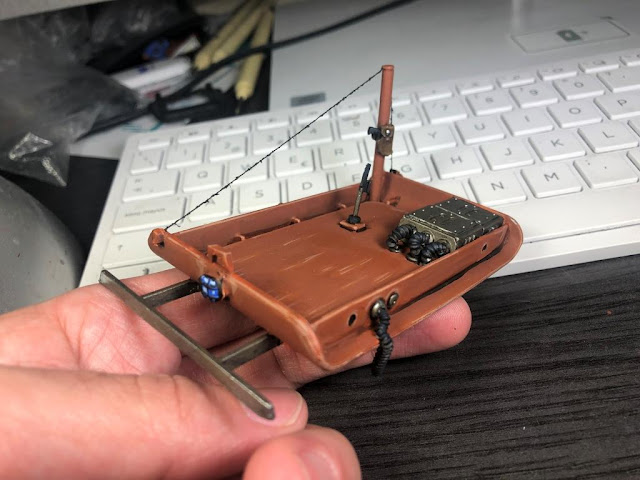 We're almost there! Final touches and...

The bases were really simple. I used standard flyer bases, but couldn't use a mere standard transparent plastic rod, as it was too fragile for such a structure. I used a transparent cilinder (coming from a brush case!)

Here you have the final result:

As you can see I've deliberately kept them out of specific 40K flavour (no skulls, no purity seals...). I think they still work for my Rogue Trader kind of settings, but they can also be used for Firefly, Star Wars or any other kind of generic sci-fi ambientation.

I didn't sculpt or use any mini as a pilot, so I can use them in terms of game. I'm thinking of those narrative games in which you decide to steal a mule and flee from your pursuers, you know, that kind of thing ;)

Well, this is it. These have been enormously fun to build and paint, it was all just an impulse and I'm happy with the results. I hope I don't have these inspiration attacks too frequently, or else I'll keep the rest of my work at a standstill forever!

We keep a tradition in my group of usual suspects; we try to arrange a Secret Santa event every year. We more or less succeed at it, though participation goes up and down depending on the year.  We also keep a deadline for sending the anonymous mini to the lucky receiver. We totally and constantly fail at that. But as it happens every single time, we bother about it no more :D

This time I picked this set I painted like in the Second Age or so:

More or less our only rule is that we don't get to buy new models specifically for this. Well, it's OK if you want to, sure, but the point is just a little giveaway of something you already have and you think the pal you got assigned will like.


It all turned into this: 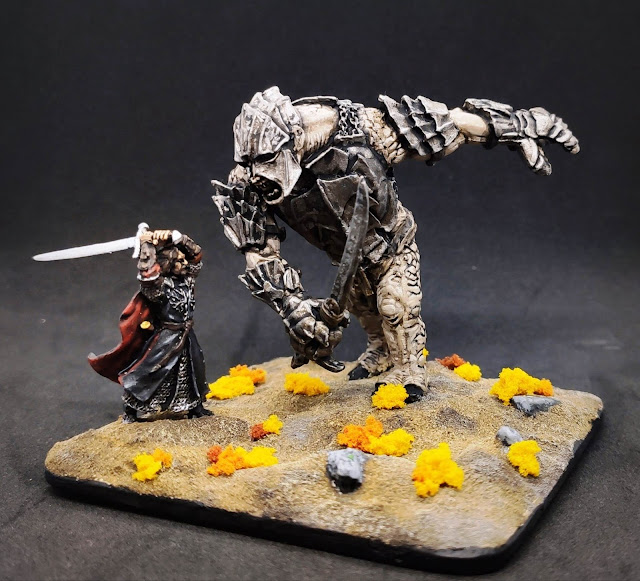 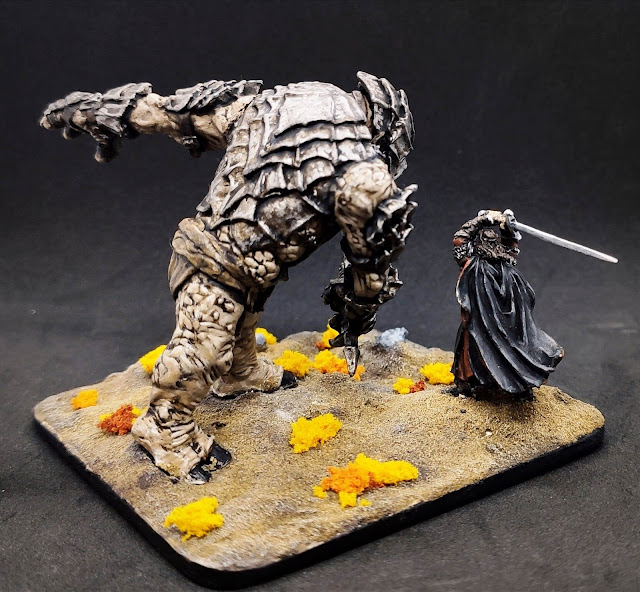 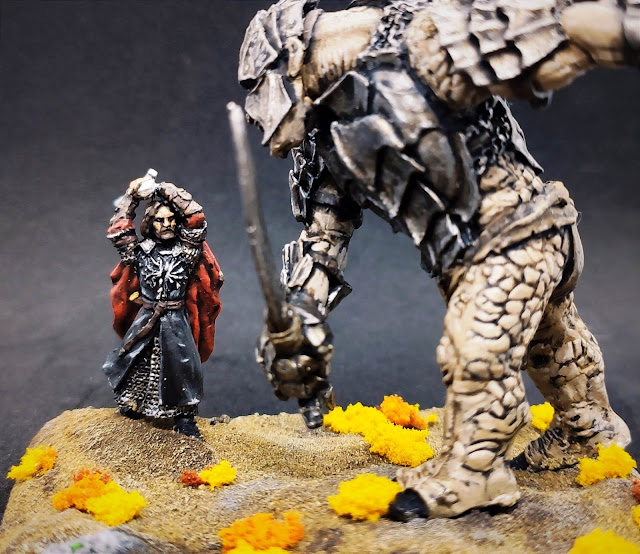 So well, it was essentially the same thing, yet different! I at least can say I think I can see an evolution in my skills :P

What did I get this time? This fabulous beakie, in the Space Sharks colours:

You know, I have my Space Sharks project in a hiatus, but I'm getting so excited by this mini I just want to take them back to my bench.

What did the other blokes get? You can see: