While working on other larger projects, I sometimes need 'something different', some fresh air. You know, I guess it's the same for everyone, a palette cleanser, anything that gives you the sense of completing things. Whatever.

Fortunately (fortunately?) I have tons and tons of standalone projects that can serve that purpose. My choice for today is this Ork Mekboy:

It belongs to Knightmare Miniatures ranges, which keep on producing real beauties. This is the reference: 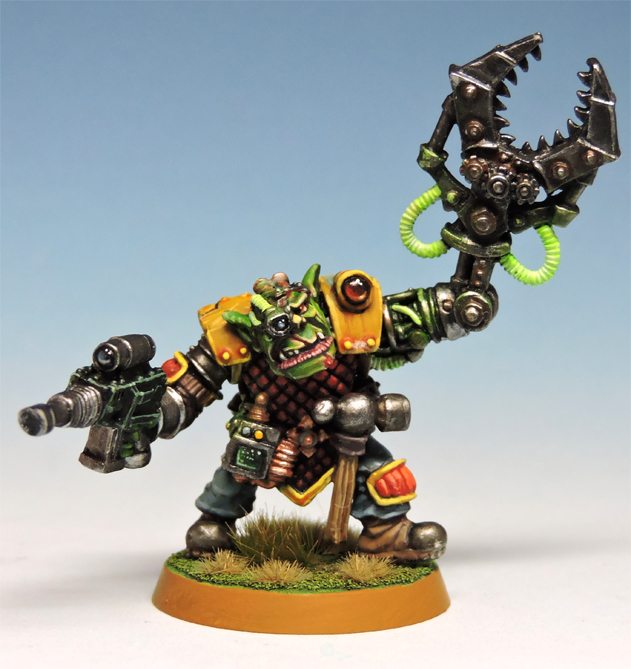 You can see the original has a huge mechanic claw. However I haven't been able to find it within the lead mountain. It will probably appear some day when less expected.
Anyway, I'm not such a huge fan of such a huge claw, so I think I would have replaced it even if I had found it! Delving in the bits box I found this:


I thought I could make it work.


It's but a plastic stick, a flamethrower nozzle and an axe blade. An Ork flamestick. Yup, I just made it up.
Painting wise I tried orange. It's been quite a long time since I last painted an Ork, specially these flak vests, and I thought it would be a touch of colour.

Then I messed it up a little. I tried a yellow and red chequered pattern on the borders of the vest:

So I had to go back to the most classic b/w checkers. Well, long story short, this is it:

I also had this other mini rolling over the bench for some time, a commission for Shadespire Underworlds, as part of the Stonecast:

It's the special anniversary mini, Knight-Questor Larissa Shadowstalker (of course I had to look it up!), with a head swap to keep the masked statues theme of the band.

This is it for now. I'm currently working on the minig town, so I expect to have some presentable progress anytime soon(-ish) and more stuff. Let's keep on working!
Posted by Suber at 22.6.20 33 comments:

Until the last corner

It's been some time since I last brought you something about the sci-fi mining town. I finished the front part and I had the far side of the board pending:

I thought it would be better to finish it before moving to the central section of the board. So first thing was taking care of texture and weathering.

These are the pieces that will fill that awful empty space:

The big stuff is done. From now on it was just a matter of adding details.


This side of the board is kind of unattractive. I mean, it's just a high, plain wall on a rocky corner. Gaming wise you have only a couple of doors to the interior and there is little space for anything. However, I felt I still had to make this part look somehow nice, or at least as part of the board. There was little else to add on the wall, but I still could do something at ground level. In order to do that I had to take a dreadful step... to add some sand right there!
Given the size of this thing it was a logistic issue, but I managed better than anticipated. I put the board on the window to let it dry quicker.

This is what I got:

Not much else to say, this side had to keep more or less simple. Here you can see the whole thing done:

Oh, you got me. Time to reveal my cards. Up on the upper corner you can see I added some foamboard as it was part of... a ceiling? But isn't that piece just the highest part of the board?

I'm afraid not! In fact you might have noticed that the board so far leaves a part at the rear which is not used. Just the depth of that extension...
That's because you are just merely seeing the first module of my board. This will be the bottom part. But whenever I finish it another module will be built to be placed over this one.

It will be narrow indeed, but will add height to the town. Now you know why I have sometimes referred to this as a vertical board. I confess I don't have a real plan, as it will all depend on my storage capacity (which is currently seriously compromised). But all will come in due time, I still have plenty of work ahead just on this module. I will face that problem when it comes closer.

Now that I have finished all the right side of the board I can think of building the central section. Stay tuned for more!
Posted by Suber at 6.6.20 42 comments: