Let's see more of the Black Legion. Today we'll have a look to pretty old Chaos Terminators. Just like the other Space Marines, there is nothing else that harshly highlighted black and gold. The Champion has a grim skull for helmet: 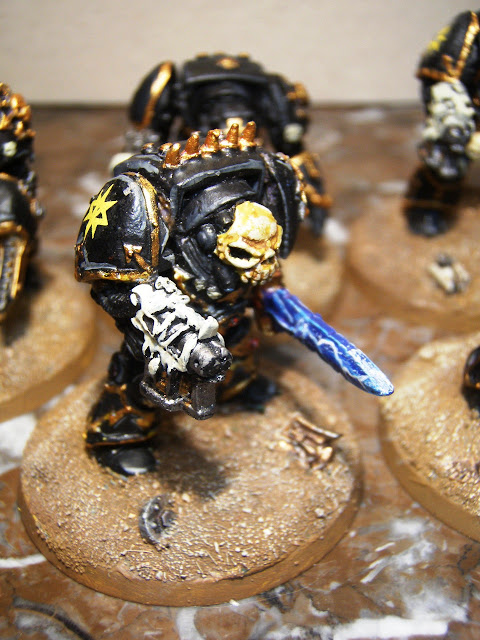 Here it is the character of Abaddon the Despoiler, with a defeated enemy, a RT Space Marine from the Howling Griffons, depicted in their original livery, before Forge World released the new color scheme in black. 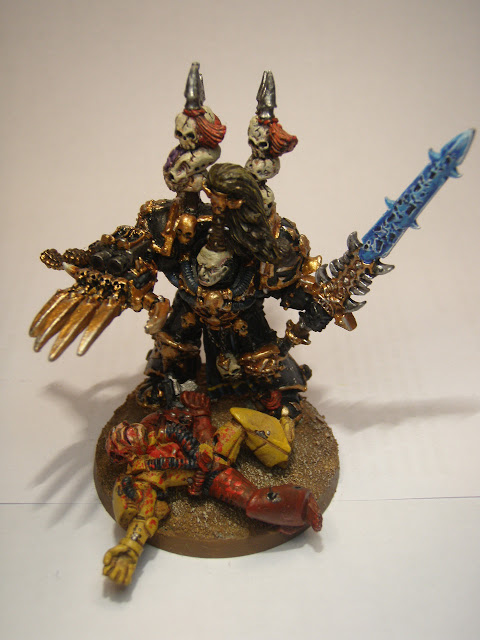 I chose this Space Marine Chapter for no specific reason but to show vivid colors. I thought it suited well to the composition.


Another example of how these minis were made more than 20 years ago: 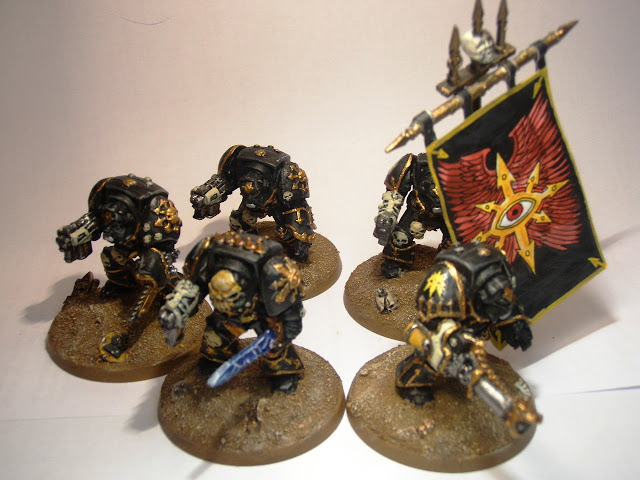 I originally used 25mm. round bases, but as rules changed, I finally had to use these 40 mm ones. Nevertheless, the original base is still stuck in there, I made little mounds with green stuff, so every base looks like a piece of battlefield. The first banner I made was this one, with a classic Black Legion symbol seen in Codex Chaos: 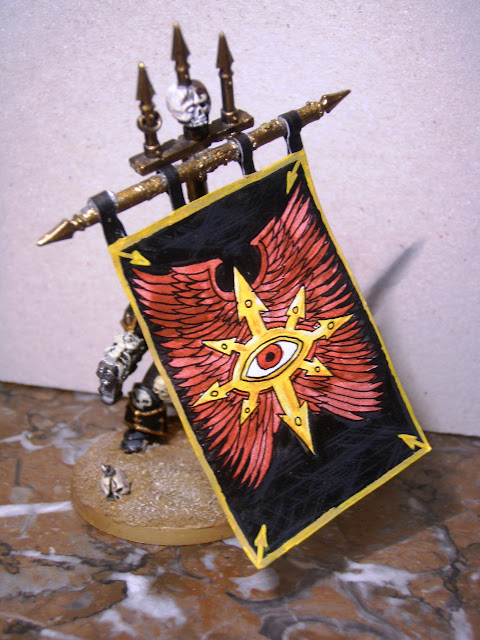 This is the image of Abaddon and his bodyguards: 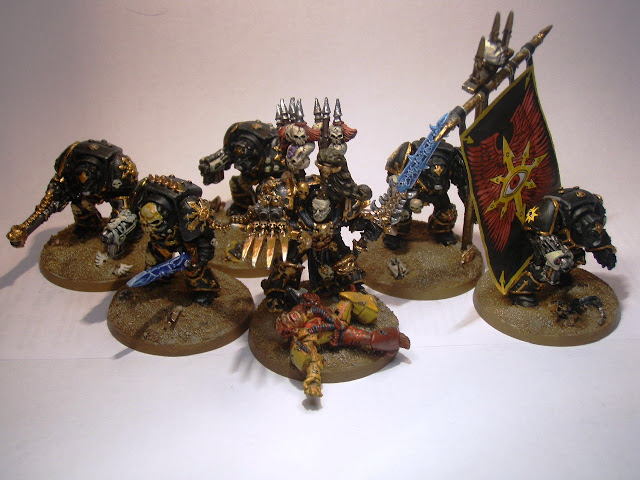 Some years later I changed my mind up and decide to give a completely different approach to the Black Legion. I wanted them to look not just any generic Chaos army, but as a proud ancient Legion which has not forgotten the roots of its origins. I decided that less spikes and mutations and more martial pride would fit well for the case. The first thing I used to make a difference was to change the symbol. Instead of the usual spiked eye, I began to use the Eye of Horus, as seen in the new banner: 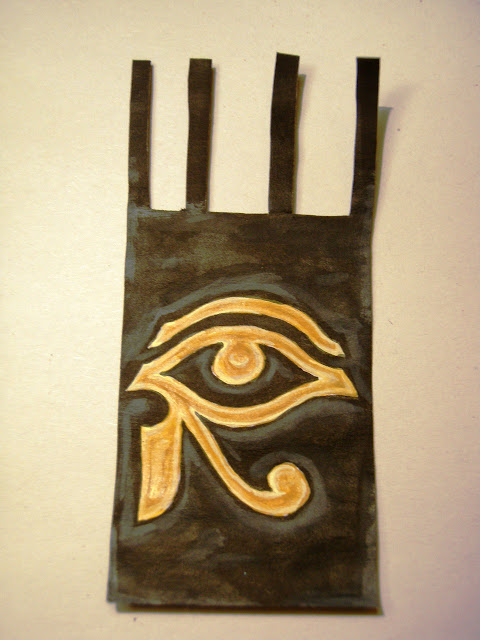 ﻿﻿This is the finished standadr bearer. Same figure, different flag, no much else to say: 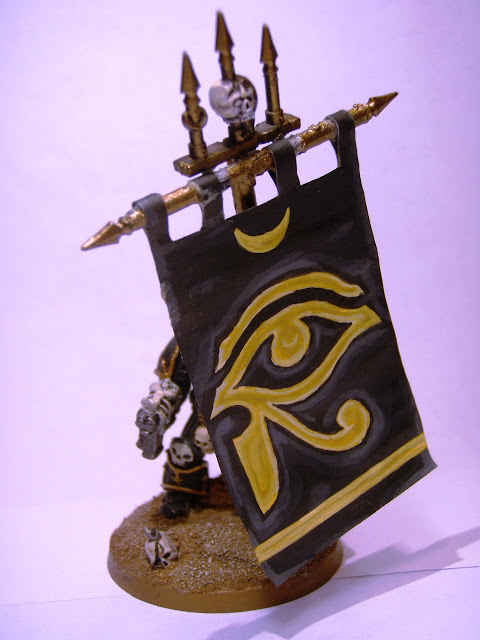 I added the crescent in resemblance of the Luna Wolves and as a badge of honor or so. It also suited with the idea of classic-looking and it introduced a heraldic element which was not so Egyptian.


So the unit finally ended looking this way: 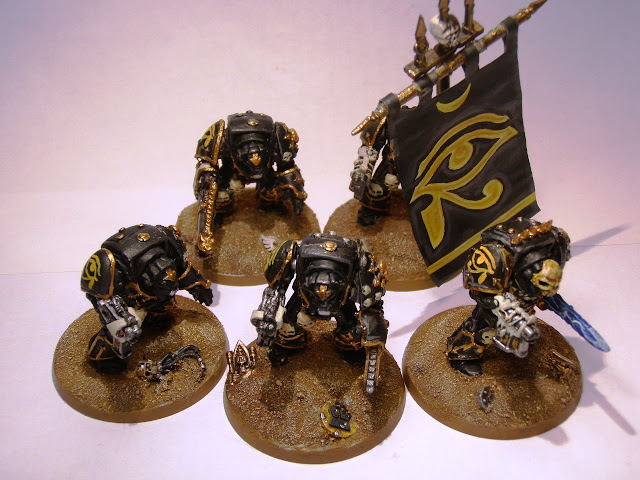 I'll keep on showing you the rest of my army with this classic concept looks.
Posted by Suber at 29.11.12 No comments:

So let's go for it. For the moment I'll be posting my old stuff, until I get some regularity and begin to show current works. Maybe I'll alternate old and new minis, let's see how this works.

First of all, here there is some Warhammer 40,000. Classic old minis, these are from Space Crusade board game. Plastic figurines with all the old taste from the first eras of this universe. 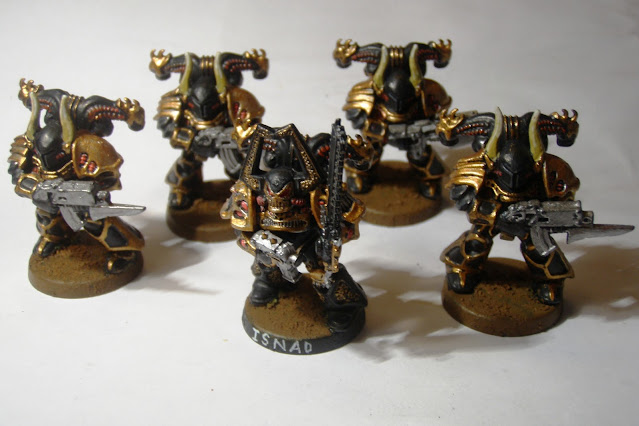 They are relatively fine detailed for that time, and make perfect Chaos Legionnaires, here depicted as Black Legion members. As you can see there is no big deal painting them. Black and gold match pretty well in these models. The only trick I used was painting the metal parts in Mithril Silver first before painting gold on it. It works specially fine for big surfaces and it helps to give more cohesion to the colour.

This one is the boss: 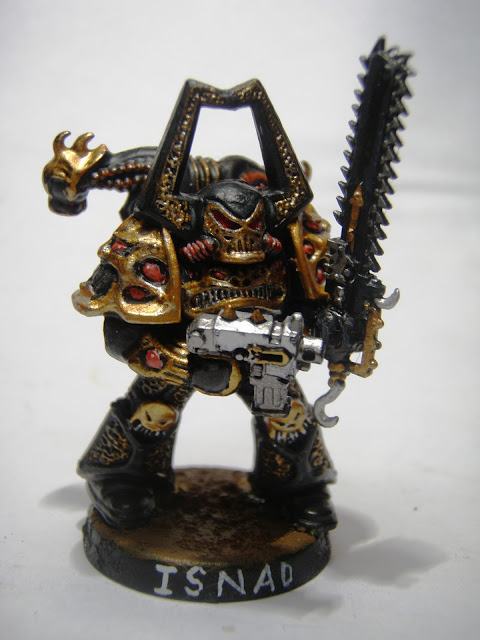 I added the pistol and chainsword in order to use him as a Chaos Champion and to look more like the rest of the army. No other remarkable points on this one.

This guy got some green stuff work. Not my best job at all, but I did it many years ago. This... thing pretended to be a plasma gun: 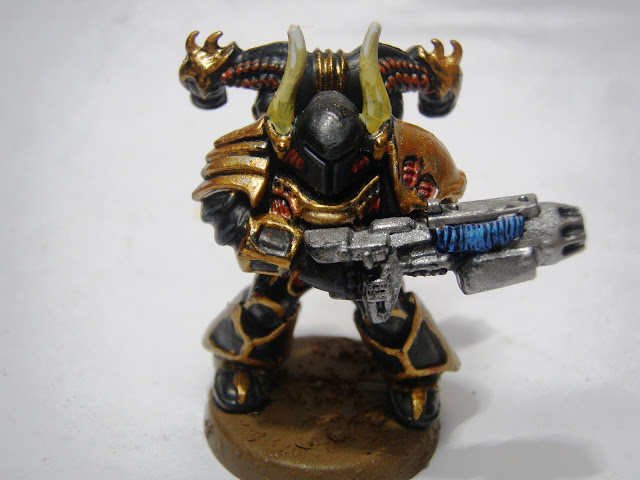 
These other guys are metal minis from the first releases in the early years of Games Workshop. I used them also as Black Legionnaires: 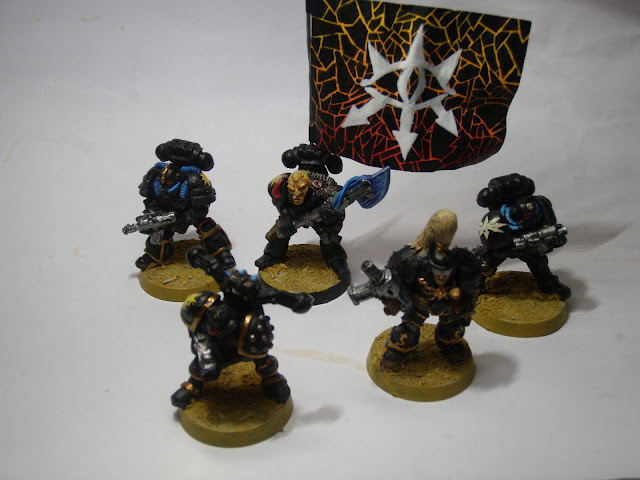 Probably if I got my hands on them today I'd do something different, but at that moment I thought it was a good idea. Besides the legendary Thunder Armour Mk.I you can see other weird armours. The funny cyclops: 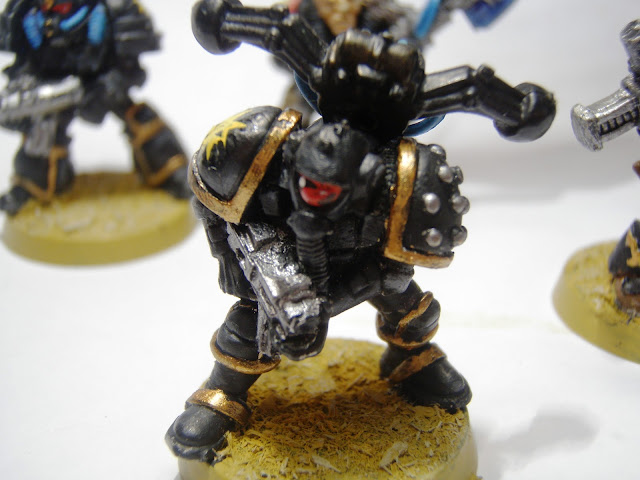 The guy with energized breathers (well, doesn't make sense, but it looked cool): 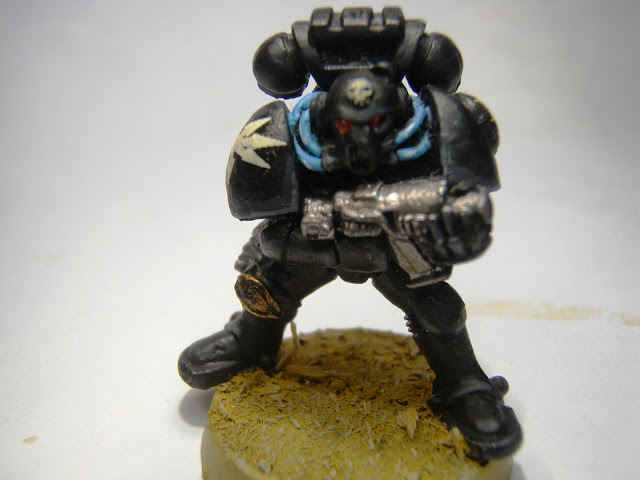 And the boss of this bunch, the man with the ridiculously big back banner: 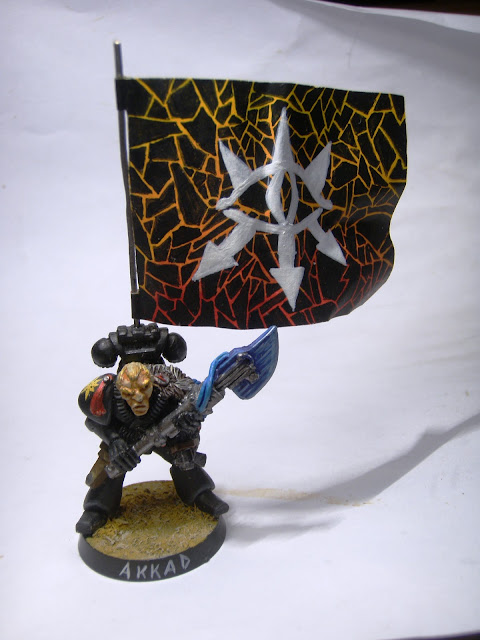 The banner is paper made. I first painted the warm colors in a degradate from red to yellow. When this was made, I began to paint the black parts making that strange debris pattern. I finally painted the spiked eye white symbol. Little big damn work, but it looks fine in the end (apart from the size, I mean).

With the years I changed the eye symbol on other minis of this army, but I never changed what I had painted, so it remained like this. I finally sold these minis to a friend last year, so I don't have the opportunity to change it any more (unless he reads this and thinks it's a good idea, wich I hope he doesn't, hehehe). I'll show you the symbol I'm talking about in next posts.
Hope you like the old tiny chaotic men.
Posted by Suber at 27.11.12 No comments:

I aim to misbehave

This is the very beginning of my particular showcase of miscellaneous tiny artwork.
What would I say about me and -more important- what would you see over here?
Still on my early thirties, I've been painting miniatures and gaming, wargaming or just playing with little soldiers, adventurers and monsters for more than I'm capable of remembering. That doesn't mean that I'm any kind of pro. Not at all, don't expect awesomic magicwonderfulonius works to win contests, for I'm just an amateur who enjoys his hobby and who is constantly learning. Slowly, but learning.

Though I haven't played anything for a long, long (long indeed) time, I still keep on painting. Mostly Warhammer 40,000 and so, but not only. I'm moving into historical minis and different things, so let's discover where this road leads.
Sooo, that's what you'll get. My humble miniatures, sometimes sculpts and -ocasionally- drawings. You already know what to expect. Keep going under your own responsibility, for we're on the move!

That's my declaration of principles. Old School Workshop starting now. This I can promise: 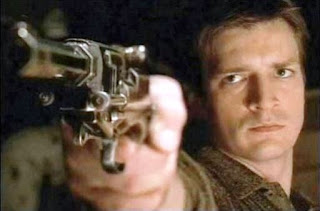