Some scenery for the 'Book of the Astronomican' campaign

The title says it all, no mistery left. I'm talking about the 'Chapter Approved. First Book of the Astronomican' campaign set﻿ released in 1988.
The campaign is set between Space Wolves and Orks, the Space Marines raiding on three power stations prior to the final assault on the Ork stronghold. They should destroy the power plants in order to shut down the Castle's defences. The campaign requires some buildings, so I came up with these. For the first scenario, the 'temple' (an oooold generator on which the primitive inhabitants built a temple) I made up this structure using foamboard: 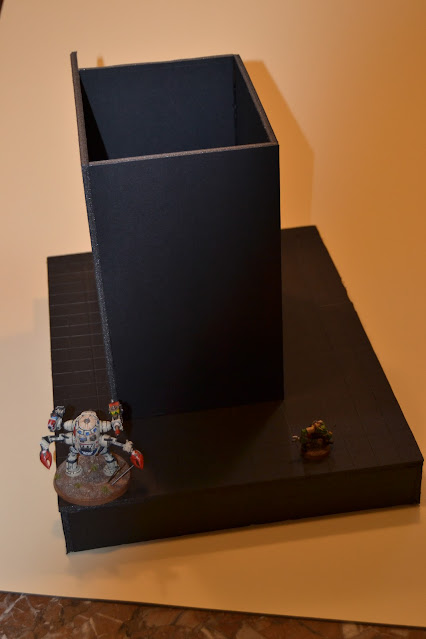 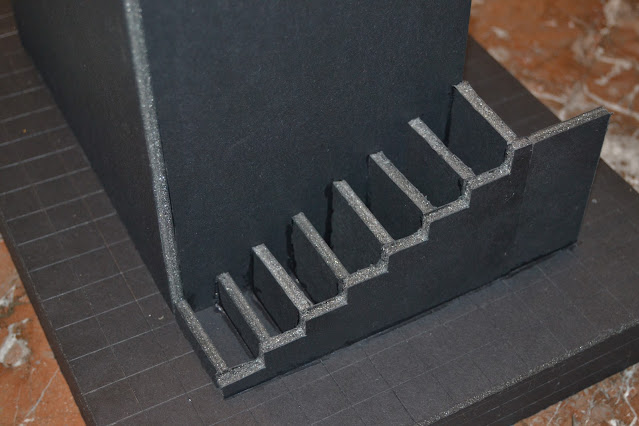 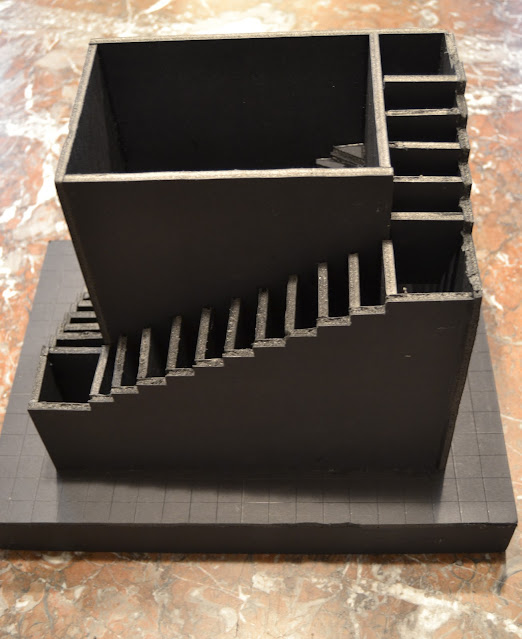 ﻿It was fun, but I was terrified about plain walls. My intention was to provide some texture, to make it even the slightest resemblance to the illustration on the book. This is the slow step by step: 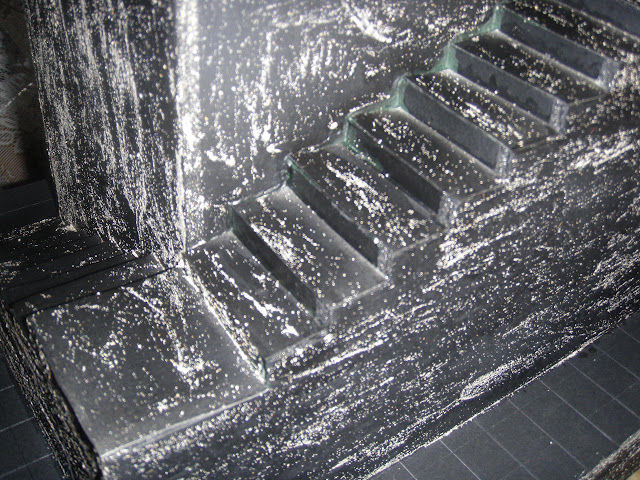 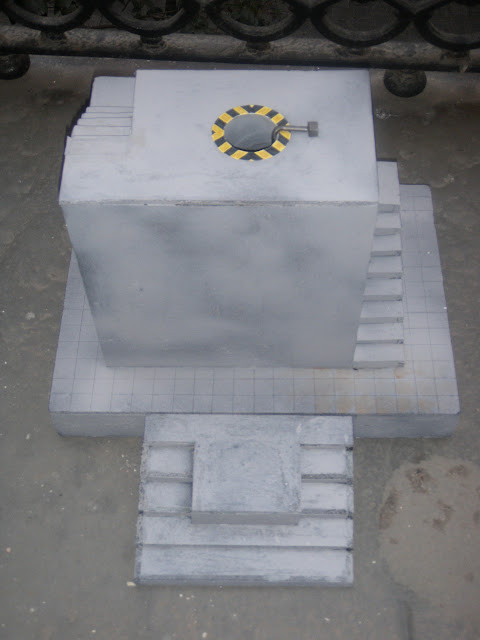 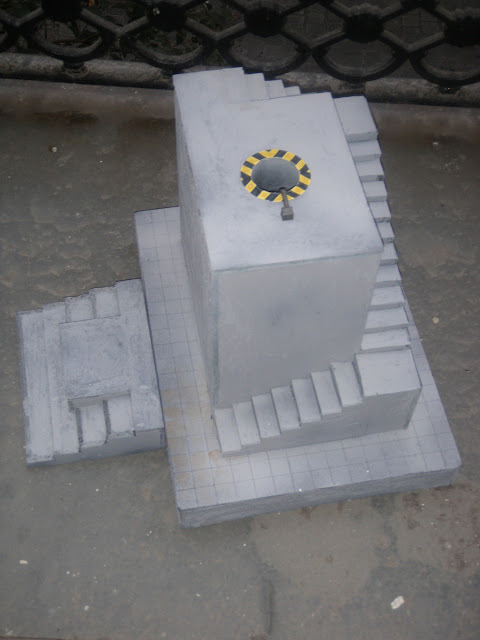 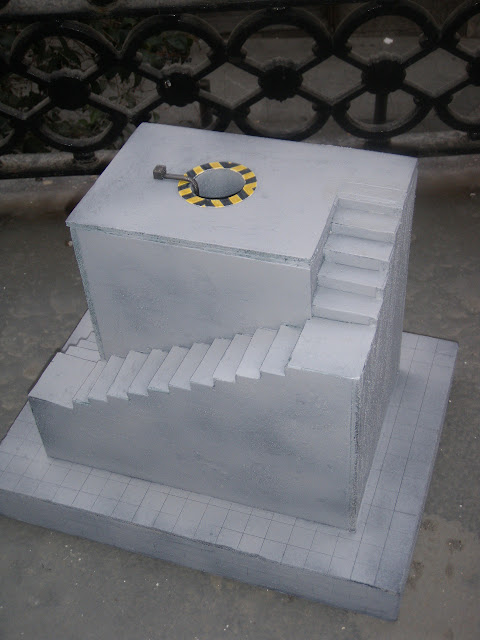 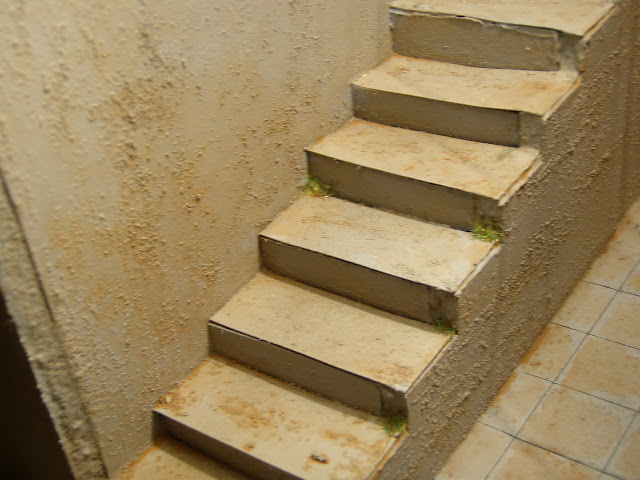 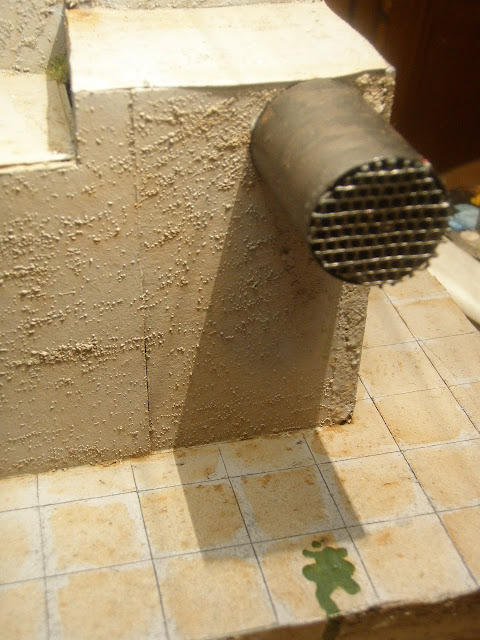 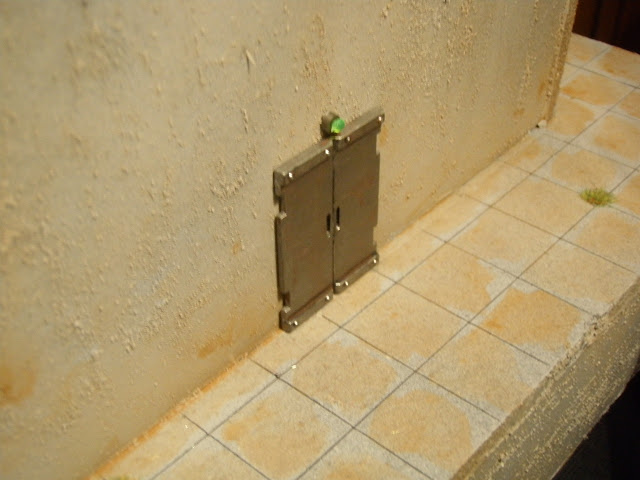 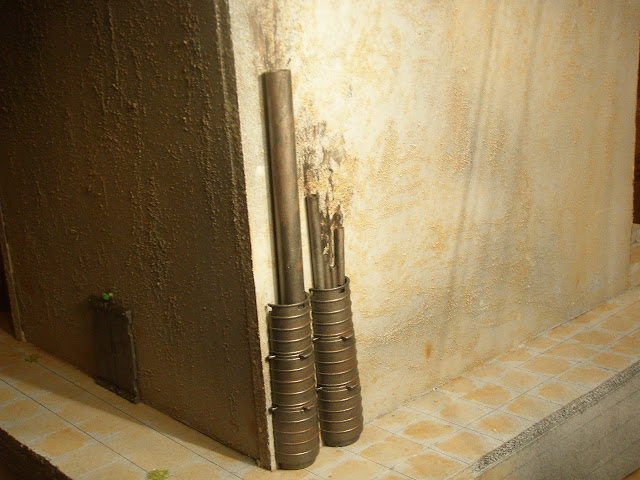 So this was the main buliding. Close enough to the original, at least for my purposes.﻿ 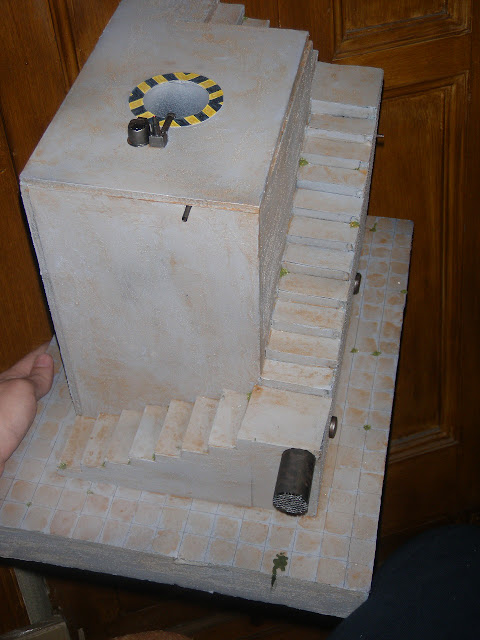 But then I had to face another issue, the big Ork statue in front of the temple. The campaign info tells us that the original statue was built by the primitive dwellers of the area, but when Orks invaded the planet, they desecrated everything and replaced the original head for a new one, resembling their own gods.
Using the illustration above as a guide, I begun to raise the statue to these amalgamated strange gods! 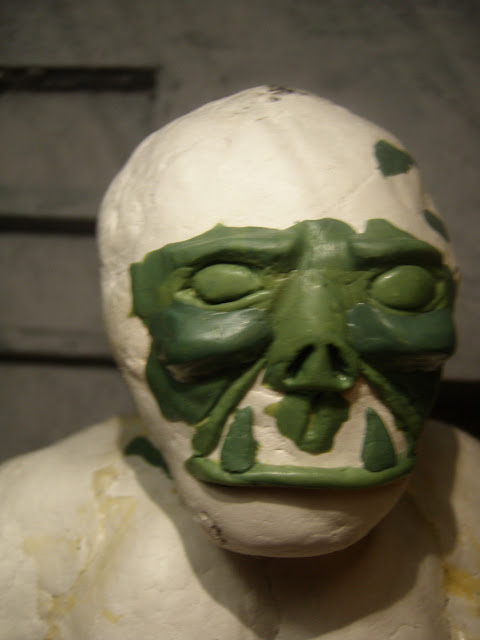 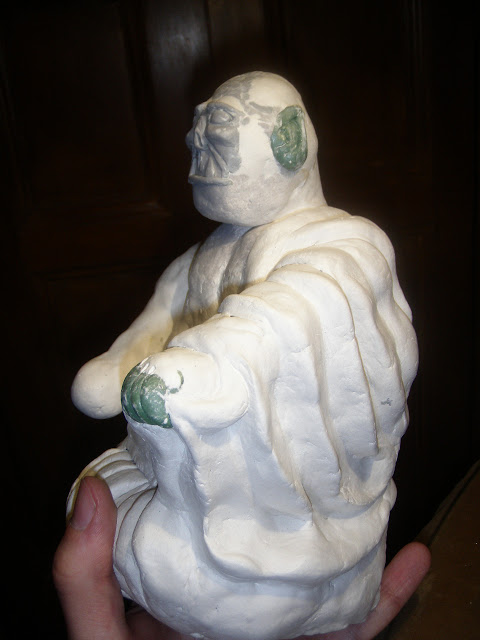 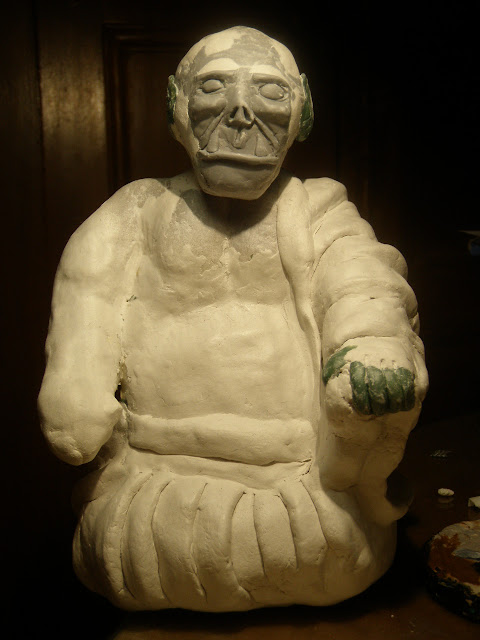 I used a hollow structure and sculpted on it, using DAS putty. I used green stuff for the face and some other details﻿ 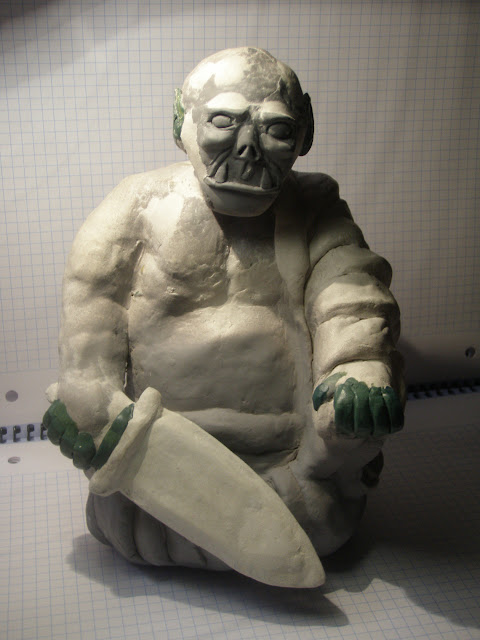 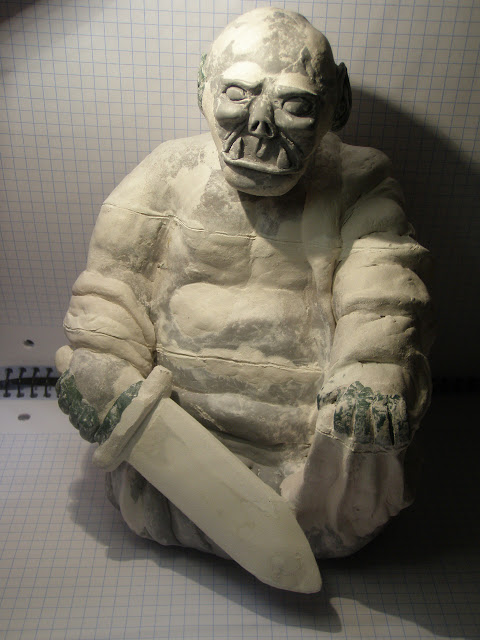 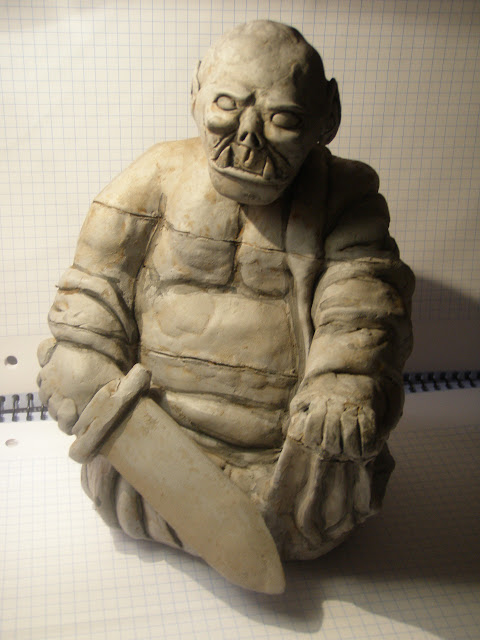 So this is the boy!﻿
Once assembled, the temple looks like this:

In case you are not into this and you need any introduction, the first edition of Warhammer 40,000 (usually known as 'Rogue Trader' or simply 'RT') had this cover back in 1987:
The Space Marine with the Ork head became quite iconic pretty soon. Last year, GW released this special edition mini:
You might notice something strange if you look close. It's the head. The mini came beheaded in its blister. After some time trying to get a solution from GW through a friend, I got no response, so it was easier for me replacing it with a head of my own. I used a Mk6 helmet and used some green stuff on it for the nose cone.
Before I speak of this incident, let me show you the other limited edition mini I was talking about. The 2nd Edition of WH40K was released in 1993, the game having  this cover:
﻿And this mini being released last year for the 'Games Day' event:
Fortunately I got all the pieces this time. That's something. Then I just had to face the problem of the annoying bubbles...
﻿ ﻿If you are familiar with the so called 'Finecast' resin GW has been using on their models for a while, you already know what I'm talking about. I had heard about the problem, but had never experienced it. These two are the only 'finecast' models I've ever purchased. The last will they be.
Talking about it would be the usual GW bashing you can read elsewhere on tne internet. I'll just say that my own experience working with this resin is not quite satisfactory. I will politely say no more.

But I don't want to end this post with a bitter taste, sooo... Bonus mini! :)

You might rememeber this illustration by mighty Jes Goodwin, depicting Leman Russ, Primarch of the Space Wolves:﻿
I got the mini on eBay some time ago for a reasonable price. Unfortunately without the wolves (Freki and Geri).
Ahhh... Good old reliable metal... Hopefully someday I can find the wolves. I promise to put Russ a cloak and banner then.

But having this mini, who would like to buy the Forge World Primarchs? Meh! This is more than enough!
Posted by Suber at 26.9.13 7 comments:

Couldn't find any other way to describe them, as they are not truly related to any other project. They are also for the same friend who I told you about the other day, the one of the 'Secrets of Third Reich' stuff. Different minis today... hope you enjoy these eclectic posts!

First of all, these hazmat guys
A close-up shot of the laptop guy:
I had previously painted another hazmat unit, but in green instead of yellow. Didn't take pics of that, I only keep this one with two other soldiers (in ACU pattern uniform):
I also painted these two scientists, the 'regular' one, who I'll call Bob:
And the Z one:
Of course we have these popular guys:

(Had a problem with those, trying to get a balance between cartoonish style and a dark gloomy aspect. I finally rejected that and simply went for the cartoon bright colours)

Finally I'll show you this little ass-kicker. You know.
What a bunch of different minis they are. Well, this is part of the charm. I'm moving back to other projects, so you can expect some old school Warhammer again. Soon ;)
Posted by Suber at 23.9.13 6 comments:

Email ThisBlogThis!Share to TwitterShare to FacebookShare to Pinterest
Labels: Hasslefree

Not that the minis are weird per se. They just belong to the 'Secrets of Third Reich' range, so they are Weird War stuff. They are for a friend, but I saw the occasion to paint them as I was painting historical WW2. You see, time counts for me! I use every minute for good! My workbench usually looks like an entropy vortex, with tons of totally unrelated minis here and there. 'Now that I'm painting this, I could paint this other one, as I'm using these colours... oooh, and then this other one... hey, and these!'
Unfortunately I'm not familiar with the game or its fluff, so I just painted them in good faith. Hope you still like them!
First of all, a German vampire:
Then a werewolf in uniform:
Another werewolf and his mistress (sorry, I can't tell you their story; I'm afraid I can only say this is a kinky girl and her dog. Again classic mandatory stuff in weird war):
Experiments! Weird war is not yet complete without experiments, of course:
It would have been cool adding some water effects, but all my experiments and attempts ended badly, so I just left them as they are.
Brits also have a couple of guys here; the first one is this Battle Chaplain
And misterious 'Dr. Lazarus':
﻿﻿Looks like a darker, more sinister Dr. Who, with that gun and the big hat. I painted him accordingly in dull dark colours and a pinstriped suit.

I'm also painting another totally unrelated set of minis for this same friend. I'm just finishing up all the bunch, so I hope I can show them just after the weekend!
Posted by Suber at 19.9.13 11 comments:

A break after these two weeks of WWII.

I've painted the Stormthing... Well, it needs a name, cannot be the StormUFO. Let's see, GW has copyright on 'Thunderhawk', 'Stormbird', 'Stormraven', 'Stormtalon', 'Stormeagle'...) For this new vehicle I'll let you choose between 'Storm﻿flamingo' or 'Stormplatypus'.
I know, platypus is not a bird, but who cares, it has a duck bill, it's enough for me.

It's being part of a Pre-Heresy World Eaters army. In case you don't know what the hell I'm talking about, I'll just say that World Eaters Space Marines went rogue during the galactic civil war known as 'the Horus Heresy' and supported the rebellion against the Emperor. Their colours were white and blue, but they repainted all their armours in red during the war (they were so stained in their enemies' blood that it was easier to repaint the armours). They begun to worship the dark god of war and blood and sing things like 'skulls for the thone of skulls'. Nice guys, you know.

At this stage they are still in the ranks of the goodies, so they wear in white and blue and have some Imperial badges.

After replacing the upper cannon and first paint layers, it begun to look this way:
Then it was just a matter of adding some blue here and there and all kind of other details. So, ta-daaa:

﻿﻿Though not being for me, it still has my usual hallmark :P, that means lots of signs and inscriptions in Gothic﻿ (kinda Latin, which is the official language in the Imperium; you know, more WH40K fluff)

Not much else to show. Here you have a couple of rear views:

A final pic on its flyer base:
Another project come to fruition! Hooray!