OK, so we have a couple of buildings and that's pretty much the project so far, but one is a tavern and the other one is a shop. For the Emperor's sake, someone needs to attend the business! That's economics 101! :D

So here we have Thonvald Callmenger, proud owner and bartender of the Sparklin' Pulsar:

The mini is from the NPC range by Otherworld Miniatures. The additions are minimal, just the breather and little else...

As you may have realized, The Sparklin' Pulsar lacked an essential item for any tavern, that's right, a draught tap! So I came with the silly idea of the bartender being able to carry this ale dispenser :D
I also made another addition to the Sparklin' Pulsar, as it also lacked bottles of spirits, wines, etc. I mimicked the set from the Alchemist's table from HeroQuest using greenstuff:

So Thony stands here at whatever time you may come in for some snack or a beer. Besides, he is the guy who can connect people looking for, let's say... protection or... a job to do, with the correct henchman adventurer in the vicinity ;)
I purchased another female bartender, but I thought one was enough for the bar. So I made up another use for the mini ;)
The shop of forbidden items needed someone to be in charge. The approach should be different that the one used with Thonvald Callmenger. But what could I do with this lovely lady?
So I designed the enigmatic character simply known as Mama Balaklava. Some people say she was a tech-novice banned long time ago from the Cult of Mars, others say she was indeed a techpriestess who went too far in the studies of forbidden technology and eventually found herself pursued by both her former colleagues and the Inquisition. Whatever the truth may be, her establishment has never been deprived of some pretty odd stuff...
The additions here are simply the bionic eye, some stuff on her right hand to show it's bionic too, the weird... spectrometer? embedded in her left arm (no, seriously, not sure of what it is, the word spectrometer just sounded cool) and the wires on her back:
Oh, and of course the servoskull. If you have ever played Monkey Island you know the only correct way to name a servoskull is Murray :D. So this is Murray X
Well, I feel much better now, knowing that the business is ready for customers :P

Still waiting for more buildings to come over the mail, but I'm on the verge of finishing another bunch of civilians... This is not over! ;)
Posted by Suber at 31.10.14 8 comments:

Last weekend I played this little game and I hadn't have the chance to talk about it.
Pocket game, in the best old school tradition. Can you remember those magnetic games you used for killing time during never-ending travels back in the '80s? Yeah, those times before phones became everything but a phone... This is not exactly that, but it's the first time in many years I see a 'portable' game :)

This time all you need are some card pieces, each one representing different units. I played the Persians, my friend Pablo played the Macedonians:

You divide your battlefront in left flank, center and right flank, and in two lines, front and rearguard, using remaining cards to separate the areas:
Each unit has different special skills, allowing them to act differently given the case:

Each player has eight order tokens. You can give an order to a unit by using one token. If you want to give a second order to the same unit, you will need to spend two tokens...

You attack rolling one die per card in your unit. You need to roll any of the numbers shown in the upper part of the card to hit the enemy.

If you get a hit on a unit, it receives a wound. The blood drops on each card depict how many wounds has that unit. If the unit has only a wound, it is immediately taken apart. If it has several wounds (as the Elephants in the pic above), flip an order token to show the wound marker. But beware! You don't get new order tokens, so if you have many wounded units, your army will be stuck without being able to receive orders!


What you have just seen took us about half an hour. Easy to deploy, easy to play. And when you are done, the box fits in your hand. So a real nice option for travelling or quick battling wherever you have the opportunity!
Posted by Suber at 29.10.14 2 comments:

A place for obscure trades and sales

Another building for the Besenval project :)

This one also belongs to the Bandua ranges and is the same size than The Sparklin' Pulsar.

Now that Kholeen M. Ooray is wandering around the vicinity, I thought he needed a place in which he could conduct his obscure trades...
I approached the project whith the idea of the building having two separate spaces, one being the public attendance area and another one being the back room/storehouse. I used a piece of foamboard for that purpose, and painted the two areas in different colours:
The place is supposed to be kinda gritty, not really a public space, but rather some kind of black market spot, the kind of place you only find if you know exactly what you are looking for. So no distinctive signs nor comfy appearance. This is the perfect place to find forbidden xenos technology, pieces stolen from the Techpriests the Adeptus Mechacnicus... who knows what is going to appear over here. This was simply the perfect place for me to set this piece after I don't know how many years:
I burglarized my bit box in search of any pieces that could look like junk/strange stuff. When you deal with these projects it is important not to loose control and find a balance; after all, you are not building a doll house (though I pretend that), but a gaming space, so all this scenery must be playable.

I have left the trap door on the floor clear, as it may be the access to a basement/catacomb... Hmmm, who knows what lies in the undergrounds... There is a ladder too for that very place, to connect to the rooftop. Here you can see the outer aspect of the building:

I've tried to keep it simple. Though I'm satisfied with the general overview, I still may add some weathering effects. I've never tried grafitti, so maybe this (or other) buildings may be the right time to start...

I don't want to make a 'grim darkness of the far future'tm oriented scenery, but I haven't found a definitory architectural style yet. I guess I still have to find the actual path I want all this to finally follow...
Posted by Suber at 27.10.14 6 comments:

Different stuff for a change :)
If you remember the commission﻿ work I did with the Imperial Guard Taurox, I told then there was some infantry pending for my mate's project. OK, I know, that was July, I've not been able to finish that until now. I guess I'm getting sloppy  older whatever :(
Anyway, the important thing is that it's here! My pal got the Scions Squad and the new Ogryns; the plan was to make a special weapons squad with the former and a close combat unit with the latter, with the idea in mind of making them different, but still compatible with, some Arbites-like force. So the colours should be dark and dull, but still resembling the rest of his force (BTW, I haven't shown you the other minis I painted for that army. Hmmm... That is meant to be corrected...)

I must say the kit is really good. I'm aware this will open the eternal GW debate, but I'm just saying. You may like or not the design, but the quality and detail of the sculpt is much more than decent. Once again we can talk about pros and cons of this kind of kits; in my opinion, we can see both of them. The sprues are totally full of hundreds of pieces, so the options for customization are almost neverending; the other side of the coin is... right, you'll end up stuck with hundreds of tiny pieces you'll never use :P. Of course I'm not even gonna speak about the price, as this hasn't been an issue for me :D
So back strictly to the minis, this is what I got out of them: 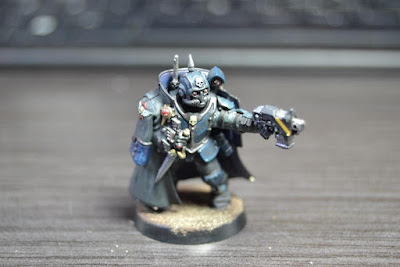 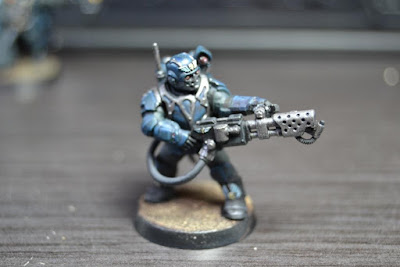 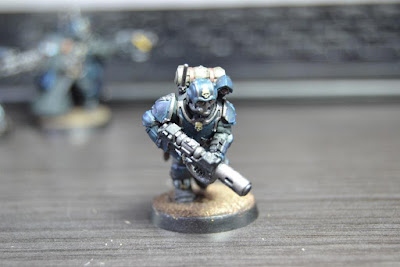 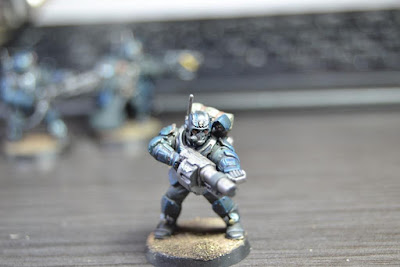 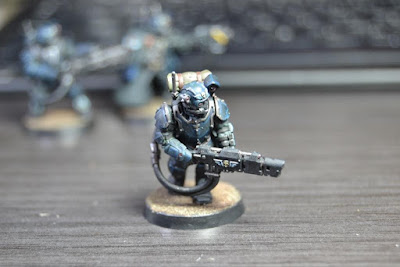 I'm not even sure if the current Codex allows you this composition of four special weapons, but what the hell, they look badass enough to don't care about that :D
The final touch for these guys is a proper Commissar:

The other part of the infantry is an Ogryn Squad. All that I said before about the Scions applies to this kit again. Controversies apart, this is the configuration I used:


They look incredibly bulky in that armour, they are toweringly impressive. I thought that they needed some ornaments on all those plain flat surfaces, so you can see I tried some tatoos. As Ogryns are traditionally depicted as having kinda a childish faith in the Emperor, I thought that this woud be a funny touch:

But when I had the squad complete, I talked to my pal and we agreed it was a real pity to let all those pieces in the sprues. We discussed about the possibility of magnetizing the arms. Would that be even possible?

So we also had this other combination:


So the conclusion I reach is that the quality of this stuff is nice, if you are willing to pay the price of these kits. You can argue about the design and the virtues/flaws of 3D sculpting and so, but as long as you have clear what you are buying, you won't be disappointed at all. I declare totally satisfied with the product, so can't ask for more!
Posted by Suber at 20.10.14 10 comments: