I've been out of blogging for a couple of weeks, but not idle at all! I'm afraid that the doctoral thesis is quite a demanding mistress. Anyway, I'm here about minis, so minis it is. Let's have another realscale Space Sharks day!

I had a look at this termie and I had an idea...

I could make an Apothecary using this one! So let's do it:


However, I wasn't satisfied. Yes, it was technically correct, but it lacked something, the mini didn't have that inexplicable thing I was looking for; maybe it looked too generic, too hollow. Then I noticed this other guy...

This one was really challenging. Cutting the left arm out was like a nightmare, as it is not a separate piece, but is attached to the body. So I was scared of ruining it all. Fortunately I managed to get rid of it and all the torso, So I could use the upper body I already had.


The injured guy was made using those old termies legs and regular torso and arms, all conveniently greenstuffed. Now I was pleased, the mini represented much better the role of the Apothecary on the battlefield, attending and protecting a wounded brother. So I could begin with the brushes! Let's try the classical white scheme...
OK, some more details later...


In Maori culture, turtles are a symbol of long life and healing, so it was settled, Doc needed a turtle. The text on the gleave reads Whakamahu, which in Maori refers to the act of healing wounds.

So, how do they look in the end?

But of course there is one question remaining. What happened to the first set of legs I first intended to use for the medic? Ohhh, I have already started the next Space Marine. Soon, soon... (hopefully!)
Posted by Suber at 27.5.18 20 comments:

Once you get bitten by these it's pretty hard to leave them apart. I'm talking about the World of Twilight ranges! These were commissioned by my friend, who got into the latest kickstarter; as always, I find them irresistible.

Belomoch dre Hearn the engineer is quite a nice, new concept, bringing a couple of tiny, adorable automata to the equation:


But the real eye candy for me this time was a piece of scenery. Listed as the engineers' cottage in the kickstarter, it's a most beautiful tiny house. I've spent some more time on it as I fell in love when I saw it.

The pic is awful, as usual, I'm afraid. I tried to apply vibrant colours to make it stand out as much as I could. I went for green as the main colour on the roof tiles so it looked different from any regular red-orange usual tones. My inspiration was some sort of Hobbiton like small cottage, so it all had to look green and nature oriented.

In order to achieve the natural look, I took the hard way. There are not two stones in the same exact tone of grey together. The same goes for the roof, each tile has a different tone of green than any of the surrounding ones. It's an effect you may not see at first sight (and it shamefully goes totally unadverted in the pics), but it certainly adds 'something' to the final result. I guess the subtleness is the best quality I can call.

I still find the Tabletop World stuff too intimidating for my skills, but this house has been clearly educational. Oh, seriously, I'm feeling the urge to build a small village!!

This is just the mere beginning of a larger batch of World of Twilight minis. I'll be switching from this project to the others I have currently ongoing (the Genestealer Cult mine and the Space Sharks), as well as any other that comes to my workbench (I have something particular in mind, dun dun dunnn...), so expect some flashy colours in the following weeks! :D
Posted by Suber at 13.5.18 18 comments:

Hi all! We are back to the wasteland walkers project today.

Once  I had Don Quirixote of Manchae Prime finished, I begun to think of his faithful companion, good, old, level-headed Sancho Panzer. Though my first thoughts were oriented towards a tiny Warmachine Jack, I had a (hopefully) better idea. I had this Kinder Surprise egg (you know, those toys inside a chocolate egg; I still cannot understand why they are forbidden on the US). Anyway, I then used not one, but two Warmachines, so I got this chubby quadruped:

This is how it looks like next to RhoCII:

So it seemed to be a proper starting point. It was then just a matter of greenstuf fand bits! 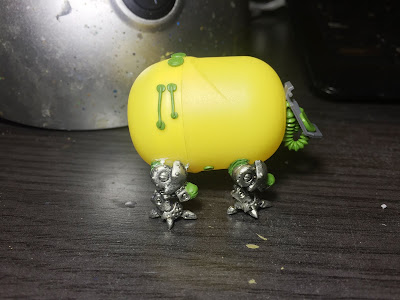 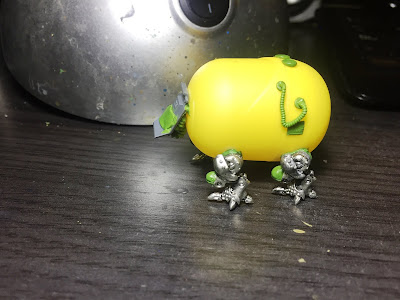 Instead of a saddle, I opted for a full seat, to make it look even more different from RhoCII. However, I was fond of the head concept I used for the other mount, so I somehow stuck to it. Once again it's a serum vial top.

I enjoyed adding silly details, such as a headrest. It's a nail; I cut two tiny pieces and then added the headrest itself using greenstuff. The rest of the nail was used as an antenna on the head of the mount:

Time to pay some attention to Sancho Panzer himself! I couldn't resist the idea of a rogue Squat engineer, an outcast from his people, wandering through the galaxy until he found someone who could offer him the taste of adventure and the promise of a proper reward. I used a plastic WHFB Dwarf:

In the end this was more or less the result: 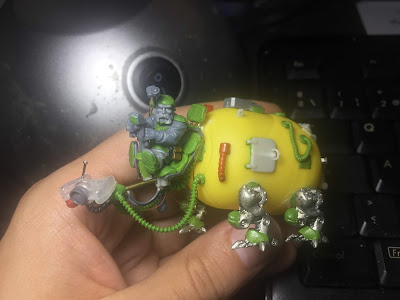 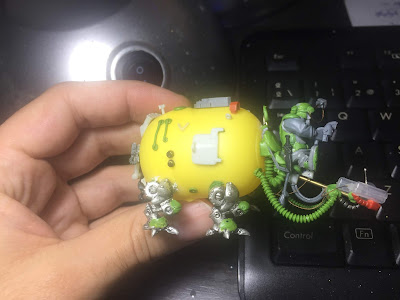 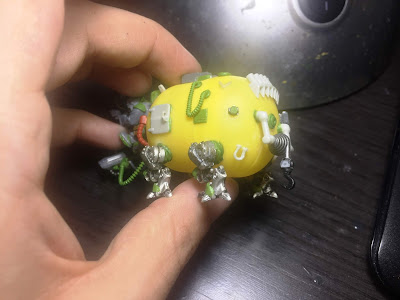 I enjoyed thoroughly adding all kind of wires and bits. The tow was something that came to mind when delving into the bits box. I imagined the whole thing as a civilian utility machine, just the kind of vehicle a regular guy would have in a backwater world to help him with his regular duties. So this is how I envisioned the Dynamic Appliance for Plural Purposes and Leverage Endeavours (D.A.P.P.L.E.)

Yeah, I know, I know. If you can come with a better name be my guest! :D
The name of course gave me the hint for the colour... somehow.

You can see where I am going with this. Here you have the final result: 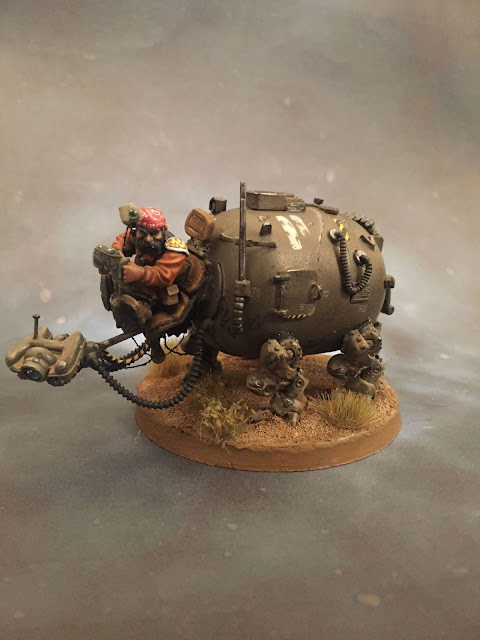 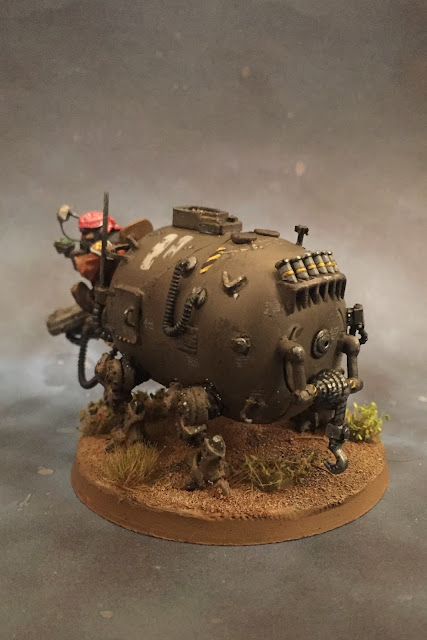 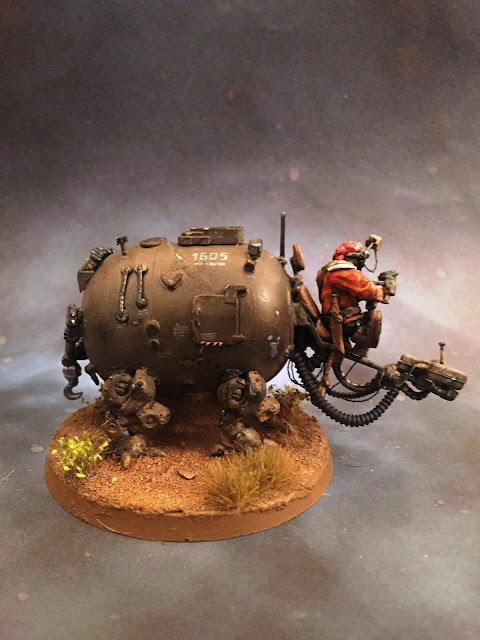 "He cannot gallop in the air: but on the Emperor's highway, he shall pace ye with the best ambler that ever went on four legs".

About Sancho Panzer himself, being "a peaceful man, a harmless quiet fellow", he left his old, boring life out of the thirst of adventure Don Quirixote offered him, as well as the promise of endless rewards, the rule of a space fortress maybe, for "then the squire might promise himself to be made governor of the place". His loyalty beyond any measure might not always be rewarded as expected, but he simply cannot understand life in any other way. "A child may persuade Don Quirixote it is night at noonday, and he is so simple, that I cannot help loving him with all my heart and soul, and cannot leave him in spite of all his follies". Now, both lord and squire wander through the galaxy in search of adventure to live, injustice to be undone and immortal fame.

Here we have the happy couple:

"What Gargants?" said Sancho Panzer.
"Those thou seest there," answered his master, "with the long arms, chainswords and guns, and some have them nearly two leagues long."
"Look, your worship," said Sancho; "what we see there are not Gargants but moisture vaporators, and what seem to be their arms are the sails that turned by the wind make the engine go."
"It is easy to see," replied Don Quirixote, "that thou art not used to this business of adventures; those are Ork Gargants; and if thou art afraid, away with thee out of this and betake thyself to prayer while I engage them in fierce and unequal combat."
So saying, he gave the spur to his steed RhoCII, heedless of the cries his squire Sancho sent after him, warning him that most certainly they were moisture vaporators and not Ork Gargants he was going to attack. He, however, was so positive they were Gargants that he neither heard the cries of Sancho, nor perceived, near as he was, what they were, but made at them shouting, "Fly not, cowards and vile beings, for a single knight attacks you."

This will be all. For today at least! The perspective of building a whole Quixote ambientation in a Rogue Trader-like setting is really (really!) tempting, but it totally scares me! :D
Let me make some progress on other projects and might come back to this. Or I may organise a contest so you build silly stuff, instead of me, haha! :D

Now, please pay a visit to the amazing Alien Wars project on Death of a Rubricist. I hope these two fit in the whole plot, as a couple of desperado rogue adventurers seeking nothing else than justice to be served, damsels to rescue and good deeds to be done, against whoever dares to cross their path with Don Quirixote of Manchae Prime and Sancho Panzer! [epic background music]