Well, the title is pretty descriptive. If you find out a better name, please be my guest; this is what sleep deprivation makes to me.

I had these almost finished, but the final touches have taken me some additional time, for obvious parenting reasons. Anyway, let me talk about what I'm showing today. They are the Khorne guys from the Shadespire core box, the other half of the commission I took from a friend.
We discussed long about the possibilities these minis offered, trying to find the mood for them. After many different ideas, I told him that I had the skellies warband and I planned to heavily convert them into a desert undead theme, but not the classic Egyptian-like concept. Cloaks, turbans, loose clothes, scimitars... that kind of thing. He also loved the idea, so we begun to translate that concept to these Khorne minis. After getting some bits, I started to work walking this path:

You can see what I mean. I went for this kind of exotic vibe, thinking of a nomadic tribe of desert dwellers, hiding in the ruins of ancient lavish towns now shattered in pieces, hunting in the shadows, avid for flesh of any kind.
The original concept of 'ghoul' has Arabic roots, first coming into European culture with the translation of the One Thousand and One Nights, so it all made some kind of sense. I didn't try to achieve an accurate Arabic ghoul anyway, but just the kind of pastiche we are used within the Warhammer universe. So I painted the skins in this kind of sick, ashen tones:

Then I considered the Khorne idea. They had to have something red, so I thought of painting some small areas and see where to go chromatically from there.

I restrained the palette to earthy colours, all in brown, beige, some grey... I didn't envision them in a Red Era fashion, so I favoured mostly dull colours. The only touch of colour was the turban. I wanted something distinctive, a visual reference, and I tried this particular yellow: 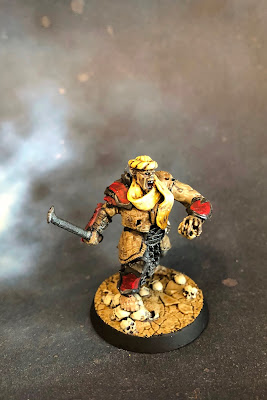 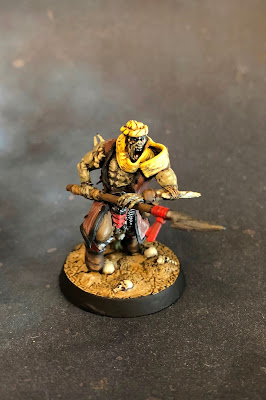 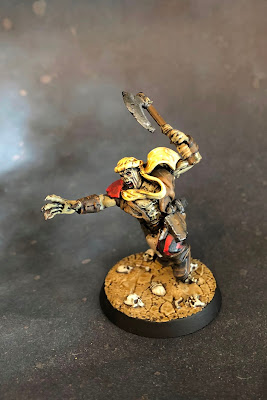 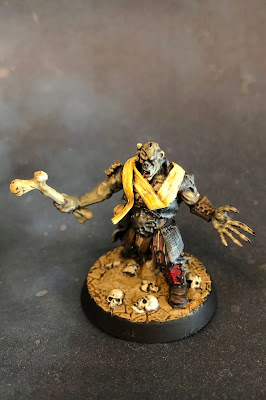 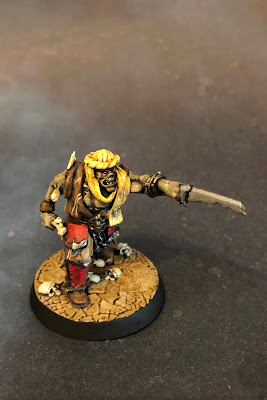 I kept the basic poses (except for the spear guy, that anyway is bearing a two handed weapon) so they are more or less recognizable, yet... different.

It's certainly been a different project. I planned to do exactly this kind of conversion work to my own Sepulchral Guard; I like the vibe, but I don't know if I'll finally do it. We'll see whenever I unpack them!
Posted by Suber at 28.3.19 32 comments:

The updating rate of the blog has alarmingly decreased, and I'm afraid it will keep this way for some (to be determined) time. But don't worry, it's not due to any bad news. On the contrary, I've recently become a dad again! The long awaited Suberling Secundus has arrived to our lives :)

I cannot be any happier, Lady Suberia is recovering well and the Suberling Prime is coping with all the stuff better than expected, so cheers!

Of course this means that hobby time will somehow be experimenting some... difficulties. Ahem. I have some WIP on the workbench, so I'll try to see it finished first, and then I'll try to favour small projects which can be reasonably achieved. Right, no plan survives contact with reality, but hey, this works in my mind!

You thought I was kidding when I talked about building a spaceport for my recently painted spaceport crew? Ha! :D

In fact this is but the start of a (pretty much) wider scenery project. Until I can show you real progress, let me just state that the plan in my mind consists of a small desert village which will have a suspicious maze of corridors and catacombs beneath ;) So nothing else than the town above my other current scenery project. I'm not sure of how will I be able to bring both together (and how long will that take!), but that's not really bothering me at the moment.

I have some pretty crazy ideas which I still need to develop, but those will be revealed in due time (i.e., as soon as I make up my mind!!). For now let me start with part of a building, precisely a spaceport. This will be quite a centerpiece on the board, just for its size if not anything else. I'm planning to use foamboard for the main structure, but it's more practical if I build and paint the inner part of it in advance and later on I build the structure around it. Let me explain with pics.

First of all, I used this Danish butter cookies box:


I used texturised paint for the floor. It took a couple of layers, as the looks of it with just one was less than impressive:

It needed some weathering and stuff. I finally got this: 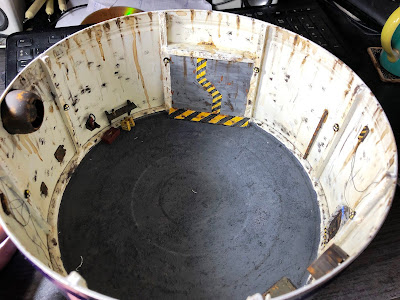 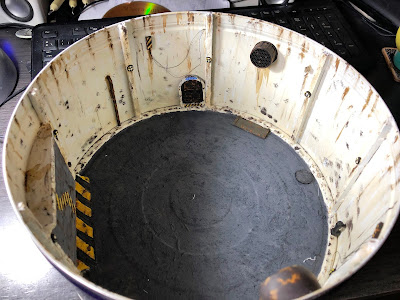 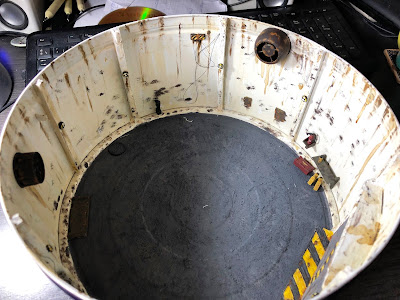 Just a close up of the workbench. A fire extinguisher (safety first!), a toolbox and a couple of gas cans:

This is all I have right now, but I'm already working on the whole building that will host this tiny spaceship garage. You can see it's not impressive at all, just a 30cm (1') diameter hollow space, but I hope it will look better when in place.

You may legitimally ask why bother on all this when Knights of Dice produce this beauty (it is a real beauty):

I hope you'll understand when you see what I'm up to. But of course I can be persuaded of having two spaceports instead of one :P
All in due time. For the moment I have more than enough with my ongoing projects. I'll elaborate more on all this as soon as I have something decent to show!
Posted by Suber at 11.3.19 39 comments: