Back to brushes! Hooray! First piece I've finished is a gift. Generously handed to me by Rinahe, a mate from the Spanish forum La Armada, it is no less than one of GW's primitive early sci-fi releases, from the first batch of RT minis:
Later on released again as one of the Space Mercenaries, this one happens to be quite a relic! In fact you can have a nice look at the primitive release at Goblin Lee's Miniatures Blog, last week he brought the whole pack to the light :)

I tried a flashy scheme, red and orange, with the helmet and backpack in grey. The helmet is fun, it only shows part of the face, and I thought it could be nice trying a little OSL effect, as if the helmet had some light inside, kind of BSG pilot helmets
Well, indeed at least I tried...
So please let me introduce Rickard Ehan, space mercenary. A tough guy you don't wanna mess up with, he is a free spirit crossing the galaxy from here to there, with no place he can call 'home' anymore. Dishonorably discharged from the 7th Dire Wolves of Andrusia, the rumours differ. Some people say that he barely escaped service in a Penal Legion, but others say that he indeed paid service until he was left for dead on the Khalamis battlefield at Bulgis III. What no one knows (or at least no one dares to say) is what Ehan did to be charged. But nowadays, his deeds talk by themselves.
Hired as bodyguard by a number of rogue traders, he wanders through the galaxy, doing whatever he is required to do by his masters. This life of adventure has led him beyond the limits of the Astronomican to uncharted space, whre he has dealt with some ugly xenos; sometimes to trade with them as his rogue trader intended, sometimes to just shoot'em in the face when bussiness went south. In any case he has never received a complaint from any of his employers, who always try to keep him in their service. But Rickard Ehan needs to break routine and simply cannot attach to a single ship or crew for too long...
So this is the story for this guy, the most recent incorporation for my Besenval Port project, which by the way is quite in a stand by, but I'm currently working on it, I hope I can show progress anytime soon...
Posted by Suber at 31.8.15 16 comments:

I told you I was bringing up some of my oldies I hadn't shown over here. Reviewing pics of minis I took long before I started the blog I've realized I have a few interesting things (and lots of junk, hehe).

First thing I'm showing out of that bunch is this FW Ork Kil Blasta.
I painted this one by the end of 2011; mostly 'just because', as in fact I never got to deploy it on the battlefield. Stuff this size begins to be out of scale to me, it's not manageable. I really have some issues about deploying a 6x4 ft. table at home, so these battle monsters become kind of useless to me on a regular basis. Anyway, I really wanted to paint this one, so that's enough motivation for me :D

So I started, piece by piece (literally!):
Here is the crew:
When you manage to fix all the hull, you get this:
Then it's all just a matter of details:

I specifically kept it dark; somehow I felt this was not taking an oldschool paint style quite good, and you have to adapt your brushpaint to the mood of the model.

So, after some heavy weathering, this was what I finally got: 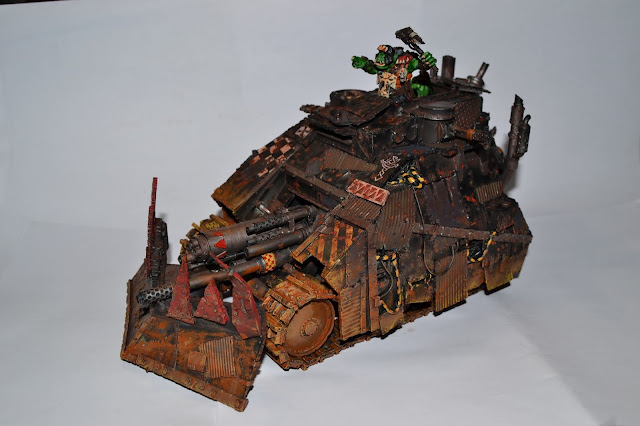 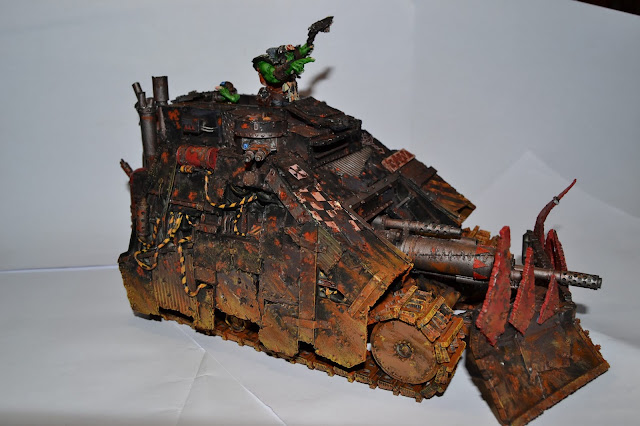 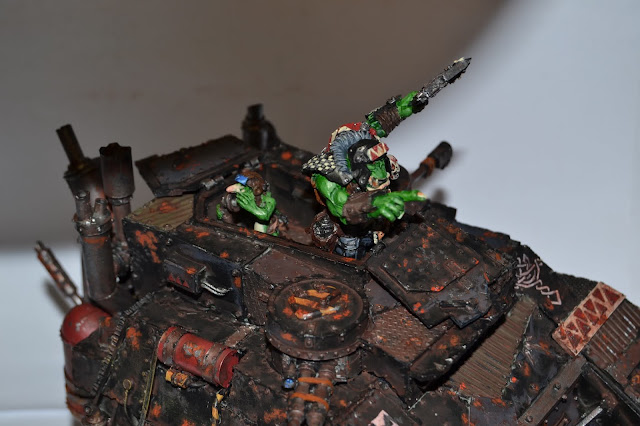 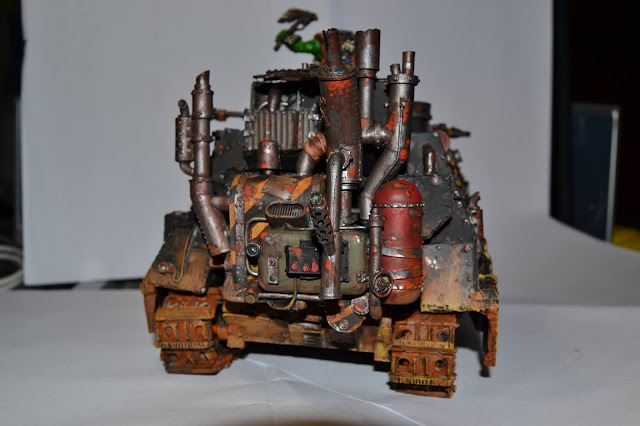 Painting such a Leviathan has little to do with smaller, regular vehicles. You have to work on another scale and always thinking of the great picture. I recall having a really good time building and painting it. Unfortunately I never got to play, (and now I handed it over to other more capable hands in which I hope it gets some real action), but it would have made a true centerpiece for any Ork army. Anyway, the pleasure of having this one finished is compensation enough for seeing it departured to another home.
I cannot deny it, these huge kits are really appealing to me, they allow you to work on tiny details as well as great surfaces, and they are absolutely imposing. Never mind if I don't get to deploy them on the battlefield. My first try on that way was a Mûmak (which I believe haven't shown over here) and the experience is just the same, a beautiful piece, totally terrifying and more a showpiece than an actual gaming model.

I'd love to paint a Thunderhawk, for example (oh, how I'd love to), or an Imperial Titan, of course. I have my eyes on an Imperial Knight, and I'm thinking of possible conversions. Well, time will tell...
Posted by Suber at 24.8.15 15 comments:

Hi there! Today I'm doing a different kind of post. Last week my first-born son was delivered, so I'm in a little vital mess these days. :D
The Primarch Protocol was activated and all the implant stages were properly fulfilled. Ossmodula and Biscopea were both a great success, as the little Suberling has been born Space Marine sized indeed :S
Catalepsean Node is outstanding, we apparently aren't able to make any success at making him sleep. Still too early to tell about Preomnor and Omophagea, but the Suberling feeds as if there were no tomorrow.
We may have messed things a little up with Betcher's Gland. Not sure if he is able to actually spit poison, but for sure he is able to defecate toxic poisonous waste. Diapers hold up for the moment, but some serious corroding has been observed.

Well, apart from these sleep-deprivation first-time-dad nonsenses, I cannot possibly express how happy I am of finally having him here. I won't bore you with all the cliches about joyous fatherhood; enough to say they are all true and it's not possible to put into words all the emotions and feelings that come to you in these moments. Those among you who are already dads will probably know what I'm talking about :)

Given the situation, I'm afraid that the updating rate of the blog will be affected. I have a couple of projects almost finished or in the final stages, so I'll try to post them in the next few weeks. Besides, I also have lots of old stuff I haven't shown over here. I'll dare to do so too, so the blog doesn't come to an indefinite hiatus and you can also see my evolution with brushes (if any!).
So I may slow down, but I'm still holding the position!
Posted by Suber at 17.8.15 19 comments:

Another change in the stuff I post over here ;) It's a commission work for a friend who wanted the Dreamforge APC (the Keilerkopf) but in the Aliens' Colonial Marines mood.

Let me say, the kit is awesome. It's totally another different level of modelling kit. First thing you notice when you open the box is that... it comes with screws and a screwdriver!
At first it looks a little bit intimidating, but in fact there is no big deal. Once you follow the instructions, your pulse begins to regulate again.
Eisenkern Strormtroopers' armour has nothing to do with Colonial Marines, but I tried to paint them in a similar pattern, imagination will do the rest.

The inside is absolutely cool and detailed. Enough to say it comes with an emergency fire extinguisher. Delightful.

Then it finally came to the screwing part... Wheels are supposed to spin! No joking, this is the most complete wargame kit I've ever constructed.
That part is a little bit tricky, as you have to make the screw fit in without actually damaging the plastic pieces. I managed more or less with most of them, but unfortunately there are a couple of them that are permanently fixed (ooops).

Colour was quite easy going. Green, dark brown washes, green again and highlights. I later added some USCM insignia and so:
After some weathering, I finally got this:

The kit is beautiful, a lovely experience for any modeller. If you ever get the chance to put your hands on one of them, don't hesitate, you'll totally love it!
Posted by Suber at 10.8.15 8 comments:

Tank or robot. More than meets the eye

Last monday I talked about a robo-tank coming as part of the Relic Knights starter set I exchanged with Keyan Sark. This is the boy:
I wasn't excited about the Relic Knights stuff any more and I suddenly came with another one of my silly ideas. What if I change the position of this, add this other thing here, glue this other there... Voilà:
I replaced the right arm pieces, but that was pretty much all, I had a functional robot that was asking for some paint:

I think it was a fun approach and a way of making a different thing, which is always nice. Now I have to look for thr RT rules for robots and see what can I do with this!
Posted by Suber at 6.8.15 12 comments:

I'm finally putting this Relic Knights project to an end with today's stuff. As I previously told you, Keyan Sark and I had exchanged the minis we had repeated from our respective starter sets. This means that I handed over him a robot and a Hell's Belles kit and I got five Diamond Corps soldiers and a robo-tank in exchange.

I of course had to try a different approach, my whole cadre being painted white! I used the same technique, i.e., white priming, light grey shades and then up until I get some decent white.

Once again I faced the very same problem. The casting of the minis is not up to my expectations, and that's a shame. Mold lines unable to be removed and lack of detail on several parts of the mini, making some supposed-to-be sharp edges quite dull, that kind of stuff.

Here you can see the squad leader:
I've tried to keep the pattern coherent with my previous stuff, so white armour with orange stripes here and there and black clothes.
I'm afraid the pics don't help much either in this particular case. Tricky colour balance, especially regarding white, I guess.

Anyway, the concept of the minis is not that bad. They look quite in the anime vibe and if just the cast was a little bit better, they would be great.

Now all I have to do is finally arrange a game to see what is this all about!

Oh, wait. You say that at the beginning I was talking about a robo-tank too. Riiiight... Well... As a matter of fact I have different plans for that one. You'll see what I mean later on this week... See you then!
Posted by Suber at 3.8.15 4 comments: