The little and the big

As I'm changing from project to project, I'm not focusing on anyone in particular. The polite way to say that is that I like showing you different things of ecclectic interests (monocle on) :D.

Today I'm bringing you some 2nd Ed. WH40K Orks again. Well, not exactly Orks, but close enough :P
An Ork army is not complete unless it has miriads of their little slavish minions, the Gretchins:
No one uses them nowadays in their games, and that's a shame. They are a colourful choice for every Ork Warboss worth of that name, able to act in such different performances as shield against enemy shoots ot a cleansing tool for mine fields (you know, that's the kind of black humour Warhammer used to have back in the old times, before it tried to take itself too seriously).

But in addition to these tiny soldierz, I also bring you just the opposite concept, the mighty Ork Dreadnought:
I can recall a time when things like this were almost the biggest monster you could set on a table (apart from a Land Raider or so), when you didn't need to spend obscene amounts of money on ridiculously enormous plastic sets to have fun. Oh, well, I'm mumbling again...

Let's see him beside his "older brother", the previous model of Ork Dreadnought:
These have been today's reenforcements, I hope you are enjoying my own old times revival!
Posted by Suber at 28.3.13 10 comments:

Okay, the project is finally closed.  :)
I'm afraid I should have taken pictures of the step-by-step on the face, but I didn't realize until it was too late. I spent some hours on this and I regret to say that the only photo I have is this sh**:
﻿
Well, my disgrace, another thing for the to do list. Learn how to use a frakking camera. No, seriously.﻿

Then I went to the blacks. Three different kinds of black here. But no one notices as the pic is crappy as usual:
If you look close, you will see the ID badge on his chest. It depicts his range (Pvt., a vertical strip, almost unseen), the 'Infantry' designation (no way to appreciate that, it's a tiny seal) and his surname. I wrote down 'Lopez'. No specific reason, it's just a really common surname, short enough and I didn't dare to do anything more complicated.
Then I added some dirt﻿. Desert means dirt, of course. But I didn't want to overdo it.
Some day I have to begin with pigments. I've seen real wonders with those, but I've never used them, I work only with paint. Some day, some day...


I needed some more green stuff to fix the arms right:

So, the final look of the model is like this: 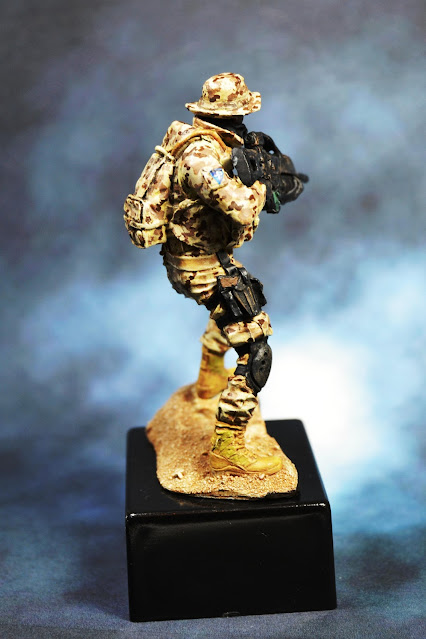 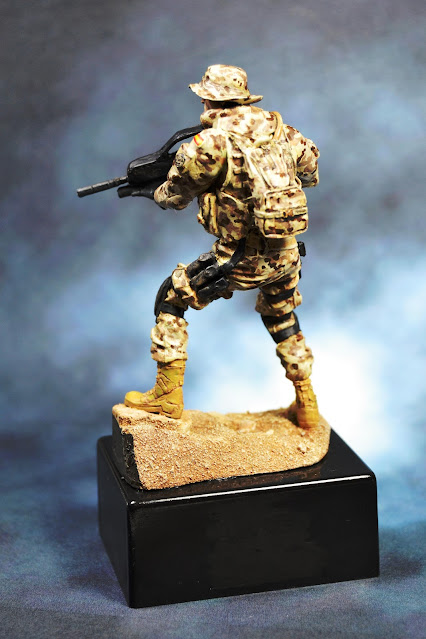 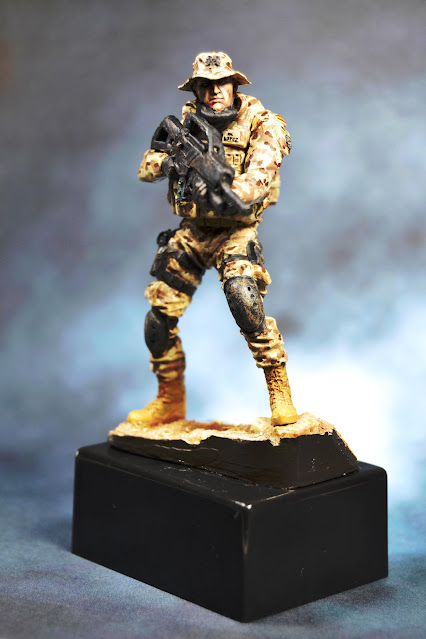 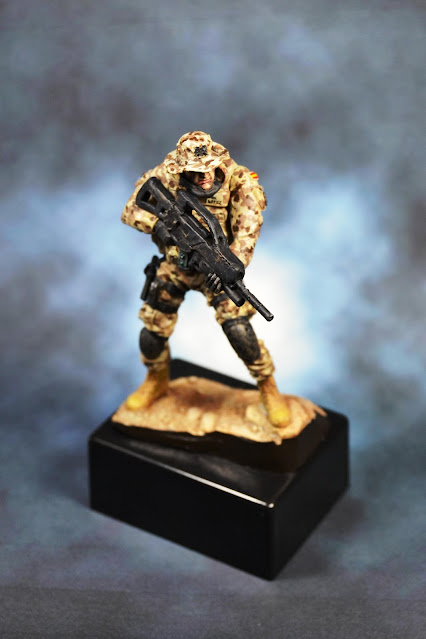 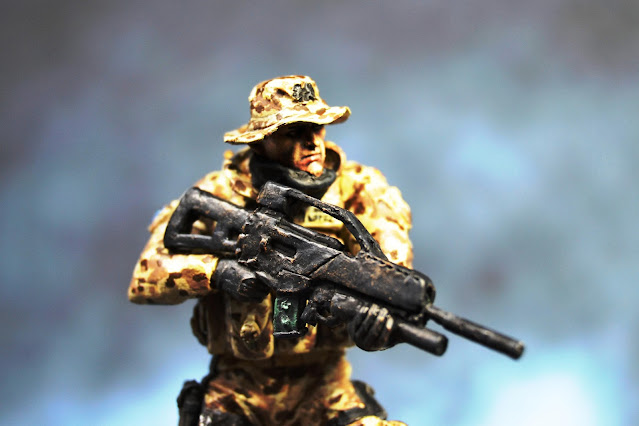 Well, this is what I have achieved with this model. On the whole it has given me some more work than expected and it has been an intermitent work I could only do from time to time. But, defects apart, I like the result pretty much. This will not be the last thing you see on this subject, that I can tell you. But not on this scale. You'll see, you'll see...

Campaign day again!
But with serious innovations: Given that nor the Rogue Trader Rulebook or White Dwarf magazine provided more scenarios, we invented a few. All credit for this must go to Rodrigo, the mighty designer of 'La Puerta de Isthar' RPG (only in Spanish for the moment, but hopefully in English anytime).

The battle he designed for us is coherent with the previous two, and takes place after the Jadeberry Hill incident. In this imaginative exercise of creativity, Orks begin the siege of Rynn City while they build a Gargant for that very purpose. They need to blow up the walls to allow the engine get into the city (The Gargant's legs cannot go over the wall, they're too short for that!). Captain Cortez must hold the Walls at any price. To make things more complicated, the Town Mayor has recruited some discontented Orks to betray their kin (RT times, remember?), but no one knows if they will be reliable at all...

So, Space Marines will achieve victory if the kill every ork carrying a 'bom' (including reinforcements that would eventually come up turn after turn, if the Ork player rolls a 2+ in a D6 at the beginning of each turn. Getting a 1 means that no more boyz will get into battle). The greenskins will get the victory if a boy with a bom stays a whole turn besides a piece of wall and detonates the device (rolling a 6 in a D6).

Each turn, both players roll a die. The one who gets the higher score controls the Turncoatz that turn. If they get the same score, the Turncoatz will spend the whole turn debating who would they really support and they will do nothing else...

Well, so let the battle begin!

So let's go for Turn 1: The Orks advance, but the turncoatz are controlled by the humans and they get out of any possible cover. The Ork Dreadnought opens fire against the Space Marine Dreadnought and causes him three wounds. Dakka dakka!

Captain Cortez (escorted by the two survivors of the previous battle, BTW) made a heroic way out of the walls and all the Marines shooted at the greenskins.

They did a real carnage, killing 30 Orks! Yuk! Brother Arsis charged his armoured bulk against another squad. The Orks reacted firing on him, causing some more damages.

But, unexpectedly, Luggub stroke the Dreadnought and ended his existence with a mortal definite hit.

So Turn 1 ended with that mutual massacre. Turn 2 begun rolling for reinforcements. A die for each squad obliterated in the previous turn. I got a 3 for the first one... but the dreaded 1 on my second roll! Agh! No more reinforcements at all for the rest of the battle!!

The Turncoatz stayed on the Ork side this turn and everyone went towards the walls. The buggy rammed on two marines, but inexplicably harmless, as almost any shoot the Greenskins made. Things were turning low for the invaders...

The Space marines did their part quite better indeed, and they riddled the Orks with no mercy at all.

So at the beginning of turn 3 the Orks had these chances: There was an Ork just next to the wall (so rolling a 6 now would make it!), there was a Squad on the left side of the table (which would reach the walls and maybe blow them up next turn) and there was another Ork with a bom falling back (who could 'regroup' -with himself? if he passed a morale check).

The fleeing Ork... kept on fleeing and abandoned the table. Shame on him!
The Turncoatz were under Ork control again and, alongside the Dreadnought and the buggy, tried to kill some defenders, with some relative success.
The boy with the bom had the game in his hands. Rolling a 6 would inmediately give Orks victory. The die fell, rolled on the table and....
Got a 3!
The Ork mishandled the explosive and fell apart in the explosion.

You can easily imagine the rest. The defenders shooted with everything they had against the remainig Squad, the only one that could set another bom. The Orks had some losses and failed the morale roll, so they totally fell back.

That was it, the defenders held the walls and the Ork offensive would have to be delayed.
On the whole I can say it was a very funny battle. Orks had all kinds of mishaps, luck was against them. If they had received some reinforcements, maybe they would have ended up blowing the walls, but being short of boyz really set the battle on the defender side quite soon. However, the single roll that could have decided the game was tense and really fun.
The Turncoatz were not a decisive element, but more a kind of nuisance, they introduced some randomness in the game, and that was also great, they made their part. Totally fun!

There will be another two battles as part of this campaign, so stay tuned, I promise you the next one is truly epic!
Posted by Suber at 21.3.13 4 comments:

Okay, let's go on brushes with the soldier.

The first steps bear no mistery. White primer and then a first colour layer to give consistence later.

After a chocolat brown wash, I gave a layer of Citadel Bleached Bone (whatever that colour is named now).

And then the real base layer, a mix of Bleached Bone and a little Vallejo flat grey.
Now, for the camo itself. I didn't even try to mimic the pixels pattern. It looks really cool, yes, but I simply can't paint pixels and square angles this size. So I just painted small irregular spots with no apparent order, trying to make it similar to the real one.
﻿I repeated the scheme again, this time with Vallejo chocolat brown:

Shading and highlighting is difficult on a camo pattern model, but I tried it slight﻿ly. With this I consider finished the step one here. Next one will be the face, accessories and so.

Everyone's a hero in their own way...

Don't you recognize the lyrics of a song...?

Well, let me explain then. Funny supes thing today.
Joss Whedon went on superheros before The Avengers. You didn't know that? Then you seriously MUST have a look at Dr. Horrible's Sing-Along Blog:
Once you've gone through the shock of trying to discern WTF is that, you'll kindly understand I had no choice, I needed some minis.
Fortunately, Hasslefree is the answer every geek needs. For almost anything ;). They recently produced this:
As soon as I saw the model I got it! But what would I use as evil Dr. Horrible? Again I browsed on Hasslefree and got this other mini:
And so I got the man who holds a PhD in horribleness!
His nemesis looks like this once painted:
So here they are, ready for action:
I'm afraid that you most probably won't get the jokes here if you're not familiar with the show, sorry. Seriously, give it a try ;)
The minis are just for collection, but of course they are totally usable for gaming. Any musings on that?
Posted by Suber at 14.3.13 4 comments:


The head of the model held some issues. First of all, the boonie, though mostly correct, had to be identified as part of Spanish uniform. So it had to bear the Seal of the Army, the crowned Eagle with the Cross of St. James.

The other issue was, of course, the scuba mask. This guy has a scuba mask around his neck:

﻿I wasn't sure of what the hell was I going to do here. After some crazy ideas, I just decided to remove as much as I could with a cutter and sculpt a military neck warmer on it.

﻿ So, once the head was finished, I glued it to the body:

﻿ ﻿ Then I went on the arms. They are sculpted as scuba suit ones, so they needed another aspect:

So... I had all the pieces. How would they all fit in when put up altogether? Let's check:
The pieces (arms and weapon) are not glued, they need to be painted separately. As you can see, I also had to do some extra green stuff work on the boots and other parts to make the model more accurate according to the Spanish uniform.﻿
So this was the scuplting. Now to the painting. I'll keep you posted!