Some years ago I took a hard choice. I gave all my Orks away (modern ape-shaped, space junker Orks) and I decided I wanted to go back to the roots. I kept my RT and 2nd Ed Orks and vowed myself to rebuild a force worth of Gork (or probably Mork). I also got like a couple of tons of other RT stuff, so I decided to start from nothing, repaint what I had and paint what I was getting.

That was years ago and I have been neglecting this for too long. Recently (well, 'recently' in this blog's terms, ahem) I received a lot (I mean a lot) of more wonderful RT Ork stuff from mighty Iain from Cave Adsum 1471, who is more than a gentleman. (Thank you, sir!) It is a shame he has turned exclusively into historical stuff, I would have loved to see this Orkish stuff painted by his hand. Whatever the case, now I had the responsibility to give these chaps some colour!

I have started with basic plastic infantrymen infantryorks. Ohh, it had been ages since I last painted any of this kind.

I did a pretty straightforward paintjob, nothing too complicated. Colour explosion at will, with no resemblance of uniformity of any kind. No Clan allegiance whatsoever. That doesn't mean I'm refusing using Clans in this project; I might use them in the future, but I fancied this approach better on these guy.

Finding suitable heads was kind of an issue, but I managed to provide a solution. Not ideal, but will work for now, at least until I find a better one.

You can see I also broke the greenskin monotony. I thought some variety on the skin colours would also be nice for a change. So this blog shows the compromise with diversity and against the tyranny of a single skin colour. Say no to Ork racism (Well, say no to any racism, you know. I was trying to be funny and I may be opening a can of worms instead).

Fortunately no gender issues have been reported among the Ork community, but we will remain vigilant.

Just a couple of group pics to finish: 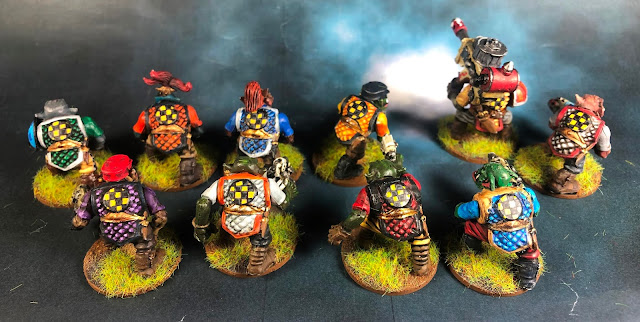 There's a kind of heraldry, right. I have some more plastic Orks, so I'm planning to expand this squad, and I'll be using the yellow & black chequered pattern to ID them.

But that will be another day! Today I declare myself happy with what will be the first unit of my upcoming Ork warband. More to come!

I wasn't really planning to start this project at the time, but last week I looked at my calendar and I saw it was Easter, and then I inexplicably fancied painting some Easter eggs.

Unfortunately I didn't have any at hand, so... I painted the closest thing I could find around.

These are part of the other large kickstarter campaign I got into in 2015, the Aliens vs Predator game by Prodos Games. I guess the story of this KS doesn't need to be told. Enough to say it experienced some... troubles and wasn't delivered until three years later or so. Long story short, I was quite dissapointed. By the day the game arrived I didn't really recall what my pledge contained (Remember? Just the same that happened with the Conan KS), but I was pretty sure I hadn't ordered some items. Whatever.

Let's focus on the silver lining. The minis are really good. I mean it. I have already played the game and I have enjoyed it. So I really had no reason to not paint them all, and having finished the Conan thing, this moment was as good as any other. So be it!

I started them last week, but just finished them today. Harsh week, you know. It would have been fun to post them during Easter, but couldn't make it. However, here they are.

Alongside the eggs I also painted these lovely facehuggers.

I'm painting my own set and my pal's too at the same time, so I guess you can expect a lot of minis on this project! This time I will be posting minis as I paint them, not as I did with the Conan game. Or at least this is my intention today. Don't know if I will keep the plans next month :D

This is it for today. I cannot say what I will paint next (or when!), as I still have maaany other ongoing projects, but well, it will be fun to discover!