First of all, belated merry Xmas! These days are totally crazy and the painting queue doesn't go down at all!
But as the last post of the year I wanted to paint something, a mini at least. I chose this one, an Elf I got from Hasslefree long time ago:

I love the pose. As soon as I saw the mini I knew I needed it. Funny thing, I have never had an Eldar force before, and I really don't plan on starting one by now. It was a standalone project, just because. The armour looked Eldar-ish enough and I had little or no conversion work to do, as you can see.

Unsure of what Craftworld to choose, I started painting the armour cold white. I knew I wanted bright colours, nothing dark at all. Maybe that was my mistake, as I ended up painting a really bright red tabard. Sorry, didn't take WIP pics. The thing is that I suddenly couldn't see but Christmas colours on the mini. It reminded me my Christmas Elven Warband for Frostgrave so much that  I simply couldn't unsee it anymore.
'Ahhh... I guess I'll have to repaint that tabard... But... That can wait. Isn't it Christmas anyway?'

So I finished the job and got this:

I may repaint the tabard differently. I may not. We'll see next year. For the moment I have this sweet Elda warrior ready to defend Craftworld Rovaniemi :D

To be honest, I ordered another Elf alongside this mini; from the Red Box ranges. It also was love at first sight. Unfortunately they didn't match as expected. It's not that the mini is shorter than the warrior, they are really a different scale.

The thing is that a friend was so gentle to give me away this other guy, which I think looks too large, but may work alongside her.

Out of time and scale

I couldn't blame you if you forgot I have a Rogue Trader era Ultramarines army. Whenever I manage to recover all my old pics from the Tinypic disaster I will be able to proof what I'm saying.

Well, the point is that I have recovered a piece from oblivion. I got this RT era Dreadnought some years ago (four? five?) at the Oldhammer Forum. I've finally decided to paint it! About time!

I never had a RT Space Marine Dread back in the day, and I really fancied to paint one. I'm afraid I have few things to tell, as the paintjob is pretty straightforward. Lots of blue (and different layers of highlighting)...

...and then lots of tiny details to make it look proper oldschool. I remembered I had these decals and I decided to use a few. First time in... well, many, many years! 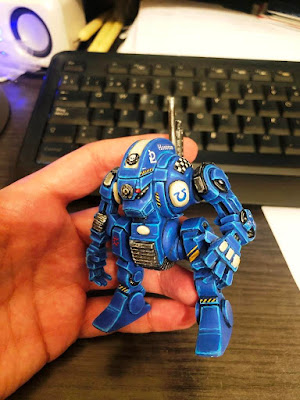 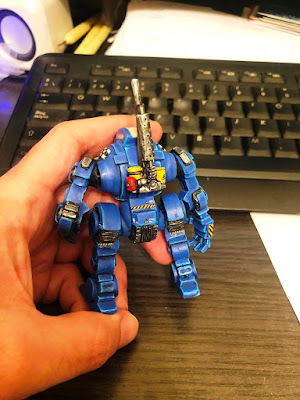 I didn't want to weather it or to add rust/dirt/whatever. Though tempting, I thought it would be better to stick to the pure RT aesthetics. With that in mind, I decided to add a back banner, as no Rogue Trader project is complete without one. I didn't want to bring more blue to the model, it was maybe too much. But then I got an idea. I blatantly stole other people's idea for I know no shame. I took some slight inspiration from Curis' recent Techmarine back banner, as I thought it really worked.

Look at the size of this beast:

So here it is, a Contemptor Class Space Marine Dreadnought (commonly known as Chuck). Yup, this is a Contemptor, not that... thing that is sold nowadays.
My favourite Dread of all times has always been the Second Edition one (the one from a couple of pics above), but I have to concede this one has its own particular charm, as strange it may sound. I may repaint mine (though not in the near future, I have enough projects!), but I have some more stuff to do in the meantime! Stay tuned!
Posted by Suber at 11.12.19 42 comments:

Another brick in the wall -and Blog Anniversary!

Though it looks like that in recent times I'm having my share of lemons in life, that's not keeping me totally away from miniatures and stuff. Slowing down my path, maybe, but not preventing me from keeping on updating the blog. I won't be whining over here, but rather look for the silver lining, and the thing is that I have some more stuff to show. So let's go!

Following with the mining town board, I had to complete the walls before I could build the central section. You may have noticed those doors up on the wall. Wow, how will the neighbours get there?

I built the platforms with some sprues as handrails:

So, in a very preliminary first step, this was my approach:

Next thing to do was the pavement on the street. I decided I didn't want just mere sand, but some gritty, old, unattended cobblestone, quite in the way I built my Shadespire boards. So same way to do it, using DAS putty and a rolling pin.
Yes, you may have already adverted the problem. I already had the streets placed, so it would be impossible for the rolling pin to... well, to roll. Given that planification seems not to be my superpower, let it be adaptation & improvisation. I cut a piece of paper the size of the street and placed the putty over it:

Then, the rolling pin:

Then I glued the paper directly to the foamboard:

Well, guess what? It worked! Hooray!

On my Shadespire boards I used mere beach sand to texture the parts with no cobblestone, but it was impossible here, given the size of this board. I would have ended with the whole room covered with sand and I don't need to give the missus even more reasons to get mad at the whole minis thing :D

Instead of that, I remembered I had this GW textured paint, the 'Astrogranite' one, which I had already used for the spaceport that started this project. Let's give it a try:

Then I could finally add the access stairs to that other door on the wall:

Time to tell you about a failed experiment. I wanted to add some colour here, to break the chromatic monotony. I specifically had this kind of image in mind, the colourful Buddhist prayer flags you can see in some places (I believe mostly around the Tibet, but also in many other places over central Asia):


However, my first attempt didn't work.

I have removed them (mere paper glued to a thread) until I find a better way for them to fit in the board; I'll probably weather and torn them a little, to tone down the colour explosion; in the end it was too much. But that will be a matter for another day.
As you can also see, I randomly added signs and posters. The final touch was some thread used as electric wire (or whatever) and a couple of tubes and bits:

Finally, with some minis for scale:

This process is painfully slow (and real life hasn't really helped!) but I hope it will all be worth of the time and effort in the end.

On another different issue, as the title says, this week (next wednesday!) is the blog anniversary. Seven years since I started posting my mumblings! Given that I already had this post, I didn't see the point in posting again in a couple of days with no pics at all. I just wanted to take the opportunity to thank you all again for your constant support; your visits, your comments, your suggestions... They all give me the strenght to carry on with this blogging thing. Thank you, seriously (no, not you, Bola Pelangi bot; in fact screw you, you've been quite annoying). Ahem. 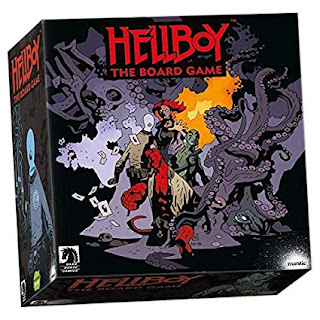 This scenario was much a better experience than the tutorial, and I think it served as a real measure of the game itself. It's quite a narrative experience. It sometimes reminded me the kind of Mansions of Madness storytelling (well, but this one is of course waaay more simple!). It's immersive and all the aesthetics and the way the game is developed clearly takes you to the Hellboy comics universe.
The game is easy to learn, making it accessible to all the comic fans that are not so used to this kind of board games; yet it provides fun to those more veteran players. I regret the lack of variety of the enemy minions, but those in the game give some good moments. The way they are activated or the frog swarms being more an impediment than a real enemy is also a good point.
On the whole it was really fun, we had a nice evening and managed to play a couple of games in maybe about three hours. Cannot ask for more!
Posted by Suber at 6.11.19 12 comments: