This mining town project (I really should think of a proper name) is incredibly time consuming, but at least I can show some progress. If the first section of the board was a huge bulk, I wanted just the opposite for the next part. Thinking of the Anasazi Cliff Palace (or something in that fashion), I wanted to try a rock-cut section. So in fact, instead of Anasazi, I should really be talking about some fabulous Indian structures.

Whatever the case is, here you can see what I mean:

The general idea is something like this:
Of course in due time I'll have to deal with those flat surfaces and square angles, but this serves my purposes for now. So next step is to build that inner structure...


Working with foamboard has pros and cons. Of course it's super easy to work with and I don't think I could have achieved these results using any other material. But on the other hand, warping is quite an issue. It's become my main problem by now. All the delicate measures and planning have faded away and I have to deal with pieces that don't match and stuff of the like. Besides, the rear panel has also warped; not significantly, but enough to be a concern. Lesson identified. I didn't think that MDF was a suitable solution for the back, for weight and structural purposes, but I may have to consider it for future boards (ahem).
Anyway, I hope that future pieces I have in mind will bring a solution for this unexpected problem. Time will tell. For now I have other issues to think about.

You can see there is an arch down right. I built this to give some depth there:

If the whole board is going to look like adobe, desert rock or something like that, I wanted something to break that monochrome look. So I gave it a whitewash appearance, kind of Mediterranean villages. To give it another touch I browsed and printed Andalusian tiles:

The sign over the door makes this board suitable for any Firefly themed game too ;-) (not the first time I use this kind of stuff).

OK, so let's see the next stage. I had to paint the rock-cut houses before I glued the whole section, or else it would be harder later. But hey, once I had the spray I said 'I really don't fancy all this white foamboard, let's make a full colour test'.

I'll give it another hand when I add details, this was but a colour test. The spray is somehow darker than I expected, but I'm not dissatisfied, I think I can work with this. I'll have to think how will I add different tones to such large, flat surfaces (and make it all look natural), but that will be a problem for the future me. The most pressing issue now is dealing with warping foamboard (oh, and thinking of a name for this town), I'll see what I can do...
Posted by Suber at 26.5.19 31 comments:

This is an scenery side project, unrelated to my ongoing vertical board, but which could fit in with little effort. It all came up one day, after realising my takeaway meal bowl had an interesting shape...

The first step was building an entrance:


The structure being transparent can be alittle bit confusing when you have to work on its surface, so I primed the building to make it all easier.

Well, it is time to add stuff. MDF bits, a piece from a bubble gun... whatever you can find:

I primed it all and then used some Das putty for the base
Brown wash to everything and hen I worked on other details, such as wires, cables and stuff

I added a relay antenna using the cap of an old ballpen:

So this is how it looks like in the end: 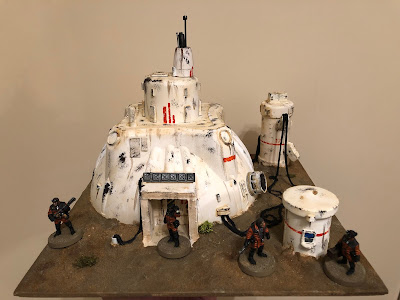 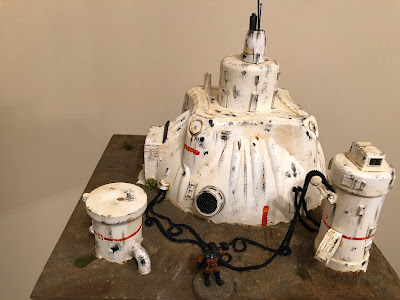 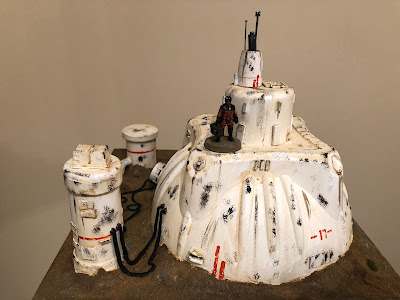 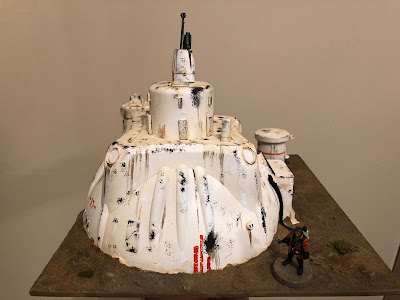 It was really easy to build, but it took me some time, as I can only steal like ten minutes here and there. The paintjob is consistent with my Moisture Vaporator, so it was but copying what I had previously done.

I think I can combine these with my ongoing board, so I may have to think about integrating this kind of sci-fi aesthetics into that. Well, that will come eventually; for now I'm happy with how this turned out. I'll be back with the large board soon!
Posted by Suber at 10.5.19 37 comments:

Descriptive, dull title, yet it really shows what this update will be about. I've been working on little structures, being adobe like buildings for the front part of the huge spaceport. My goal here is to somehow break the monolithic appearance of the big bulk by adding irregular structures with different volumes. In doing so, I also pretend to get familiar with this kind of buildings, as they will be populating the whole board.

It shouldn't be that difficult, as all I'm trying to do is different square boxes and little more. But let's stay a little on that 'more'. At some point I found myself staring at this finished duct tape and a plastic sphere from a toy from some kind of vending machine. I cut the ball and got this:


I also cut the card of the duct tape in two and got this little tower:

I added a few foamboard pieces on the top to build the viewpoint.

I'll place the tower on this terrace:

I thought of having a door, but when I cut the front part of the cardboard I had another idea:


Of course I didn't want it all to look just the same, mere dull blocks, so I tried this archway:


This kind of arch is evocative to me, and I though it could look nice here. Of course cutting those out from the foamboard was a hell of a work for my limited skills, but for sure I'll improve with practice. Eventually.

This will be the wall for the inner part:

So this is more or less what I am getting:

I planned a taller block over that terrace (so in the future it can be connected with a catwalk to the other side of the building; that will be another story to tell). But this time I tried this open stairs thing, so it wouldn't look so boring:

So the catwalk will come from the other side and end on this rooftop. I planned a closed access to the building with some kind of hut on the rooftop. But I gave it a second thought. In doing so, you would have to imagine the whole thing; I mean, a mini going through the upper access and making its way down to the open stairs. Then I knew.

Nope. This is not what I'm building here. That is the opposite of what I'm doing on this board. That idea is unimaginative, this block offers a boring shape and it isn't worth building. So I'm doing this shit properly:

I had to heavily improvise, but it worked in the end. I cut the whole upper part away and made the stairs visible. Now you can follow the whole path and it's still playable.

Of course you can only see the rough shape of it. I won't add new buildings here (the upper part is the very spaceport!), but my plan is to add lots of details. Vents, wires, doors and stuff. But you can at least get an idea of what's in my mind.
Now these buildings have to be glued to the main structure, the warping issues have to be dealt with and so on. I may have to paint at least some parts before I add the catwalks, but that is a problem for the future me. This is it for now; the project keeps going on!
Posted by Suber at 2.5.19 29 comments: