This story begins with an innocent 'Daddy, daddy, can I play with your white robot?' 'Sure, son, just be careful don't drop it'
...

...
I've been looking for previous pics of the Dread in its original state, but didn't find them. I painted it loong time ago, before I started the blog, and apparently didn't keep any pics of it. Shame on me!
EDIT: Found them! 2010 it was. Wow, I've been browsing into files in my computer so deep that they were almost catacombs by themselves.
Well, as you can see above, it's a Rogue Trader era Ork Dreadnought. I painted it white/cream just opposite to another 2nd Ed Dread I painted black for the Goff Clan (apparently no pics either, and I sold it ages ago, dammit! I curse you, young me from the past!)
EDIT AGAIN: I happen to keep everything, but I tend to forget where!
Now that I had to glue it back again, I thought I could as well give it anoher lick of paint. In my mind it was easy. My original plan was to keep all the previous work and just add some highlights here and there, nothing too complicated.

Well, it got complicated.

I ended up repainting it all from the beginning, but just repeating the scheme.


Almost all the decisions were essentially the same, apart from some minor variations. For example, the white sun flares on the claws, which I decided to start on the opposite side. I painted the stubber magazine (or is it an auto cannon?) red. Oh, and for the sake of my life I couldn't make the 'fangs' on the belly work in any convincent way. I reckon it tries to produce a pareidolia effect with the visors on the upper side, but honestly, it wasn't working. I greenstuffed the area and turned that part into a mere grid. I think it still works.
Finally I took the poles from the base (what was I thinking of when I put those there?) and repurposed them as back banner poles


I fancied a different kind of banner than the usual, so I tried long horizontal flags instead of a single vertical banner. I wanted them to look colourful, to give some contrast to the ubiquitous white.


Though it got more complicated than I expected (and consequently took more time than anticipated!) I have no regrets, I'm happy to see it back to service again, and I think I can see an evolution as a painter, doing the same thing on the same model, which is always educational, at least.
Hmm, should I paint some white Orks now? Tempting...
Posted by Suber at 29.7.20 29 comments:

Orphans of the Ossuary

Not all orphans in the Imperium are so lucky to be raised at a Schola Progenium. Only those whose parents were servants of the Emperor get that kind of high standard education. But the Dark Millenium grants plenty of opportunities to produce orphans, of course. Lots of them. Each place deals with the issue in their own way. Local orphanages, Family/Clan/Warband self-regulated nurture houses, tribute to the Dark Lords [comment under scrutiny of the Holy Inquisition]... Most commonly the different pious Orders of the Ecclesiarchy manage to run institutions devoted to that purpose. The Order of the Ossuary is no exception. They raise abandoned children and educate them in the sacred rites of their ministry, for they assist the monks in their duties. When they reach adulthood, the survivors can leave the Order or remain within it to perform menial works. Only former combatants can become monks and full members of the Order, but there are a lot of different assignments that can be allotted to these servants, for the Emperor rejoices in all honest work.

These minis are from the Black Crab 2nd Kickstarter by most awesome Andrew May from Meridian Miniatures. Having backed the first one, my whole attention was dragged onto this new range as soon as I had a glimpse at them. They share the same creepy vibe, the unsettling looking, the atmospherical feeling that got me the first time. The KS was called 'Necropolis scum', but I thought I had to tie them somehow to the first batch, so that's why I came up with the idea above.
OK, enough words, let's hit the pics.
There are not only monks and servants around the convent. Beggars of all kind look for charity. Sometimes security measures have to be implemented, as not everyone comes as a friend.
The kickstarter provided two stretch goals, but the decision was easy to make, it was a no-brainer. Mischiefs on a pole. Or at least I decided to show them that way. First one calls for the mental image of a witch. So the signs on the pole say (in proper High Gothic)  'Psychica' (quite self explanatory), 'Vates' (foreseer) and 'Magi' (kind of magician/witch).
The other guy was more difficult for me to read as a miniature. If I had to tell, I'd say he's a living sign, heading people in the right direction. So I figured he was kind of a snitch and his sentence was that. The sign reads 'Dum Lingua', 'Long tongue'.
Here you can see the minis alongside the ones from the first KS:
Finally a family shot: 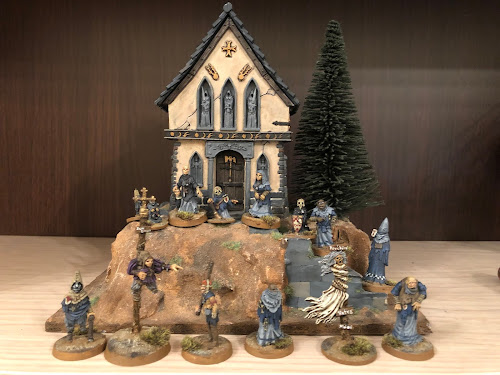 They of course work both for gothic sci-fi and fantasy and they are a treat. I know I really need to build an ossuary for these!!