A little bit of dungeoning bits

Some kind of interlude post today, as I'm derailing away from my usual stuff. As told you some other times, the lack of time forces me to aim for small projects which I can open/do/close in a relatively manageable amount of time. So they serve me as side projects while I keep slowly working on larger stuff. This is one of those occasions. I had this box from Valquiria Studio waiting for ages (some years in fact) to be painted, and so I did!

I did nothing but a quite straightforward paintjob to take them out of the bench, allowing me to take some fresh air and think of my other ongoing projects. Here you have the stuff:

Of course the central piece here is the translucent resin door:

As usual, you can't say from the shitty pics, but all the stones have different tones. Take my word. I used this cream/white palette to tie it with my Shadespire boards. No particular reason or plan at all; it's just that I don't currently have any other fantasy looking buildings or ruins, so I just kept that flow.

While doing all this I also found this Barbarian by Heresy Miniatures on a shelf, so I made some room for him. After all, these bits need someone to find them over the dungeon, don't they?

I think I can use most of these for my current Genestealer Cult/Mining town projects. That's why I painted the eggs in those colours, for example. They serve as objective markers or whatever, so you may see them in the future out of a dungeon ;)

Well, this is it for now. Now I can turn again to something completely different, as usual :P

This project is going excruciatingly slow. Much more than I wanted or expected. But so is life and so are the things. At least there is some progress!

You may remember I finished the far side of the board, so now I could go into the central section. You can see it here, with the first piece of central elevation, where the future structure will be founded:

When assembling this part I soon realised I would have to drop one on my very early ideas for the top. In the beginning I wanted to somehow use this bridge here:

Such a big monster will distract the eye from the rest of the structure, and that's not how I want it to look like. Besides, building the support for the other end of the bridge would inevitably bring some issues regarding the slope. So I'll have to let it go and replace that with a lighter structure.

But that's a problem for the future me. For now I have to focus on the central building.

But I'm not happy with this solution, you know. I want this board to look crowded per se, oppressive, rambling... But yet playable! This doesn't really allow me to develop proper movement of miniatures in there. So, as much as it hurts me, those stairs have to go away. I will change the access to that door extending the catwalk towards the opposite building, up of the slope.

You can see I used the same Green Stuff World rolling pin on DAS clay, then added some sand. The texture on the tower is mere wet DAS.

THEN I WAS TEMPTED

The original idea was supposed to look this way:

But at some point I envisioned this other configuration:

It would be a complete shift of the original concept, extending the slope up to the left of the board and creating a wide open space right in the centre of the structure, which I could use as a two-storey bazaar.

I confess I spent a few days exploring both options and weighing pros and cons of each solution. But in the end I stuck to the plan. Attractive as it was to have a wide, open, playable space, the second option really got away from what I was going to create here, the little adobe maze.

So now that I made my mind up I could start working on the front piece:

I thought that an arch would look good down there, and then the real door could fit inside. I could have tried a more complex shape for the tower on the left, but I think it works as it is nevertheless.

You can see I added the piece for the next section of the slope and textured the surfaces.

There is a little cobblestone floor in that arch area. Once I give a second coat of colour I can start adding details and stuff. I'm not sure of what can I put on top of the tower. My choices are an adobe demi-sphere or some antennae or things of the like, but I'm still undecided.

I have to repair the catwalk over the slope. I'm afraid that now that street is too open, so I'll explore my chances to add an arch at the very beginning of the street, giving access to the whole town.

I have not renounced to the two-storey bazaar, but now I project to place it to the left of the board. But first I'll have to finish the slope, to have a clear idea of the composition of the volumes. But first I have to finish what I have already started! Well, you know how this works :D

This is the current state of the board. I hope I can resume production anytime soon!

While boring real life is meddling in the way, I've managed to finish a tiny achievement. Some time ago I got a Necromunda Ambot thanks to a pal.

I immediately thought I had an use for such a beast within my Genestealer Cult project, as a mining support device of some kind, which is quite obvious, of course. But instead of being a poor Ambull augmented and trapped into a metal framework (however, how cool is an Ambull Dreadnought, uh?), I soon envisioned it as a suit of some kind. There are many conversions of the like over the internet, and I knew that it certainly works.

I had to face a setback quite at the very beginning of the process. The hip. It's purely mechanical, it enhances the robot vibe, but you cannot pretend there's a person inside there (and the torso is not large enough for a human sized being to fit in). So I had to replace it. First thing I found that could work was a bit from a Terminator:

It's a little bit forced, I know, but in my mind it worked better than the robot waist and hip. Next step was to remove the cogs and make the central part look as it was the inner part of the armour.

You may have noticed I didn't use the pulley and hooks over the head. Instead of those, I used the grav weapons. They are supposed to be the laser cutters the suit uses for working with hard rocks.

You may have noticed the main flaw in this suit's design. It's a huge, bulky armour, with two laser cutters over the user's head and two enormous claws with fucking saws attached, ready to cut and smash the hardest rocks in the mines.

So the user's head is exposed to the crushed stone flying away like shrapnel all over? Hmm, no wonder the union guys were so tiresome on the subject.

I found a solution in this air freshener bit. The liquid inside got spilled right as I first tried to use it and it was kind of unusable, but its shape was appealing enough, so I kept the thing.

I only needed quite a small piece as a visor:

But... it didn't. Though I cut it more or less to fit in the armour, once I glued it the fumes of the superglue fogged the whole piece.

After cursing in several strange languages, I took a deep breath and started again.

I used a tiny piece of card and allowed some ventilation on the model, as much as I could afford.

It worked! I had a minor fogging problem, but on the whole I called it a victory. I sealed the imperfections with greenstuff and gave it a more industrial looking with the front protection bars.

Little mystery on the arms. I painted the Fodinae Conlegium ('Mining Guild' in HighGothic) signs and some random numbers and stuff. I also glued a staple on each arm. No particular reason, they looked nice as additional bar protections over those gears.

Here you have the thing finished! 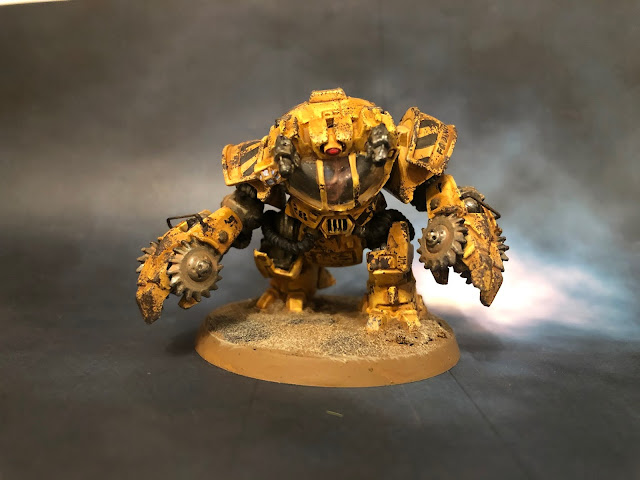 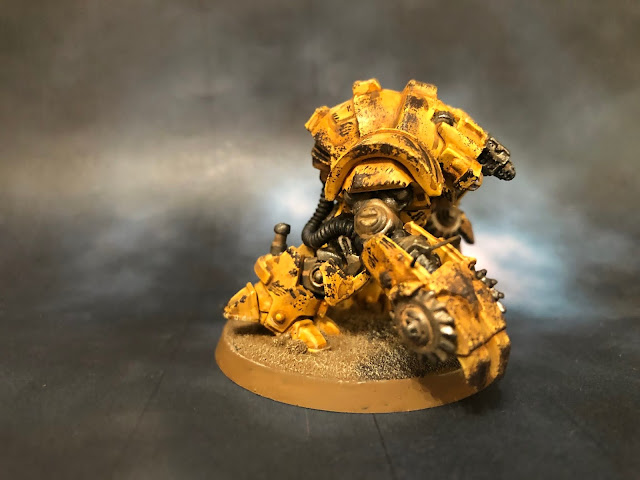 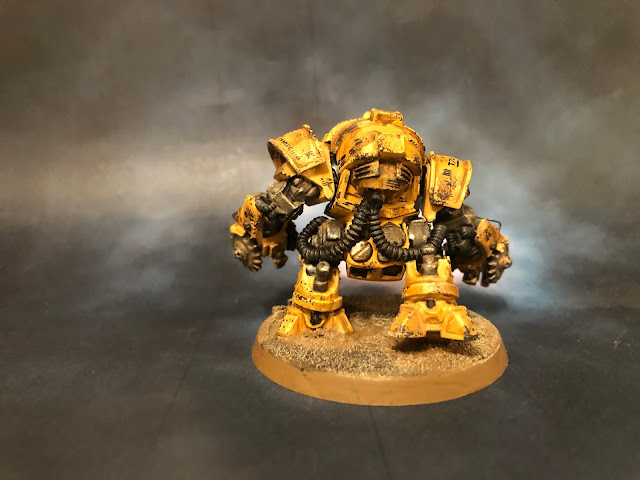 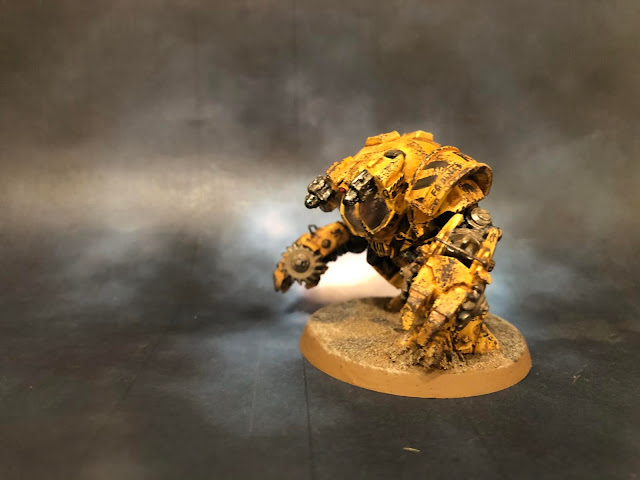 I love the shape of the suit. It's not elegant at all, but crude in its design, it really works perfectly as a heavy duty industrial armour. You could replace the claws with forklifts and would have the 40K version of Ripley :D

So these are my main heavy support devices for the Cult so far:

Oh, and you know what's the best part? The sprue comes with two different sets of legs. So now I have another pair of legs I can use for... I don't know, I guess I'll have to make up something!