With the Aliens finished, it was time to work on the other half of the Aliens vs Predator title.

The faction has quite less minis, but they are, of course much more individualised. They are true monsters in the game, and all of them are characters on their own. 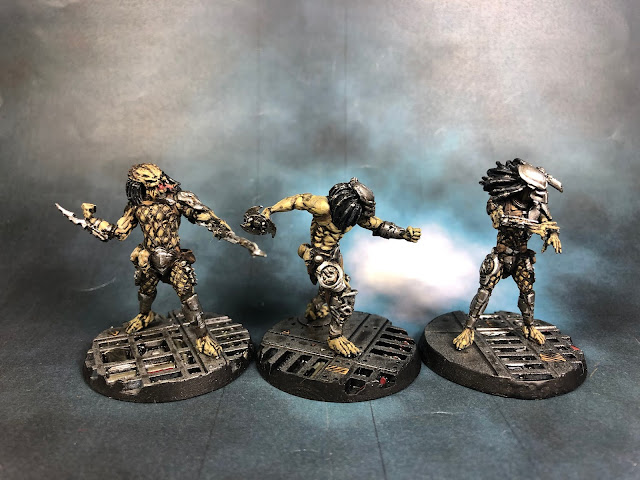 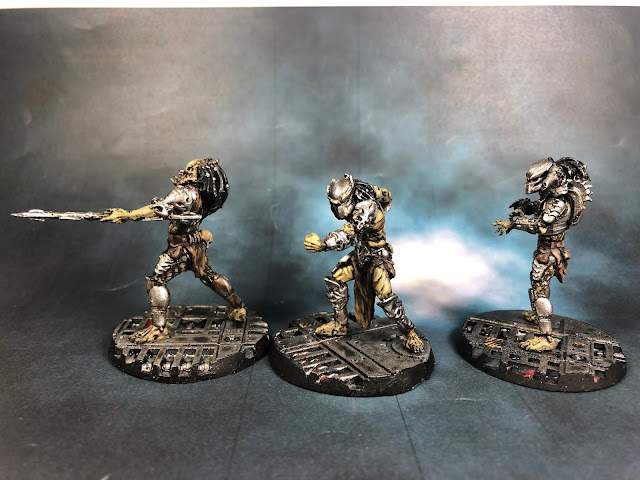 The skin was pretty tricky. The base is German Fieldgrey from Vallejo. After generously inking it with Agrax, all the different highlights and skin tones were done adding browns and ochre/yellow to the base colour. It doesn't really show in the pic (grunt), but trust me, they are not monochrome :D

A pretty cool thing from the KS is that you could get cloaked Predators. I mean, clear resin ones:

In order to keep transparency, the minis came in hundreds (well, not as many, but they looked as hundreds!) of spare pieces. These were the first I glued of all the Predator batch, so I didn't notice they were exactly the same sculpts than the others! If only I had had the others as a visual reference, I guess the assembly would have been easier!:D

More Preds. These are the Warriors:

As I'm painting my pal's minis along with mine, I have several of these minis repeated. I think I can save you from identical pics, hehe. The only new thing is that I spared a few Predators of my own and gave them different bases, just in case I want to play something (yet to be determined!) on a jungle based board, which I think suits these guys as well.

The KS also included these Hounds. I'm afraid I'm not as familiar with the Yautja fluff to know anything about them, so I painted them this way. As the horns/spikes/whatever look horrible to me, I made a few slight variations on a couple of them, so they don't look so over the top.

So this is the Predator faction. But I'm not done yet!

I have also painted the objective markers, both the generic from the core box and the Alien ones. If you look closer, you'll see the synthetic is not really Bishop, but he's as close as he can legally be (licenses and copyright issues, you  know :P)

This is it for now. So I only have the Marines to do, I tink I can be reasonably optimistic about the project... :)

Back to our regular programming, I've made some progress on the Gargant!

Nothing too spectacular, but some important pieces nevertheless. I've completed the lower parts of this monster, i.e., the belly gun and the rear tray.

The belly gun is split into two pieces, for storage purposes. One piece, the ordnance part itself, will be attached to the underbody:

The other part is the conglomerate of gun barrels. I wasn't sure of what colours to use. At first I thought of metal or black, but on a second thought I considered it wouldn't stand out at that scale, so in the end I opted for this white/bone/whatever:

So when we put the two pieces together...

The rear tray was pretty simple to paint, I did quite a straightforward job which I hope is enough for its purpose. I didn't want too many colours, would have been distracting, so bare metal it was.

This is it for now, let's see how it looks when assembled:

What do I have left? The arms, the back banner and the storage box. Hmm, this project finally looks feasible (Not easy! Feasible!)