Back to old WH40K today, with some more Orks.

It is known that Orks keep on growing their whole life. Those who live enough (i.e., those who survive battles and inner revolts within the tribe and the clan in the struggle for power) become the true elite of the Orks, their leading class. Their skin becomes darker and their muscles rougher and bulkier. The rulers of the Ork society are really killing machines unparalleled amongst their peers. We could call them Aristocracy (in its true ethimologic sense, 'the rule of the best') or Nobles. The Orks call them just 'Nobz'

Here you have an example, Ork Warboss Nazdreg Ug Urdgrub and a squad of mega armoured Nobz.
Orks use their own teeth ('teef') as coins -literally. They are constantly growing and regenerating, so every Ork itself is a proper motor of economy, never lacking a way of subsistence! However, teeth degenerate quite easily, so it's rather impossible to amass too much wealth for a long time. Ork ekonomy is quite fluctuating! Among all Orks, those from the Bad Moon Clan are usually wealthier, as their teef grow faster. So they tend to bear eccentric wargear or to use flashy and expensive weapons and vehicles.
I tried different combination of arms and weapons in order to avoid having two identical minis: 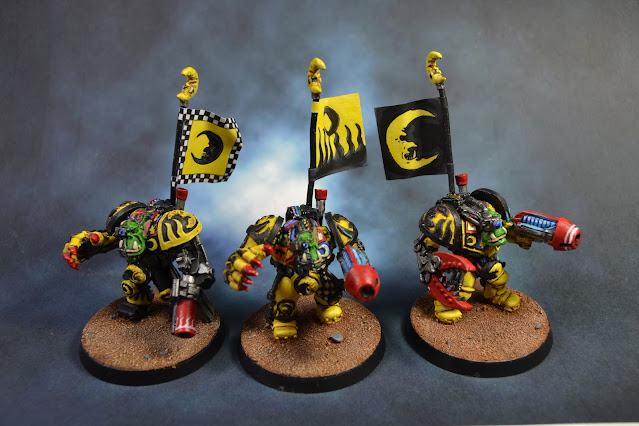 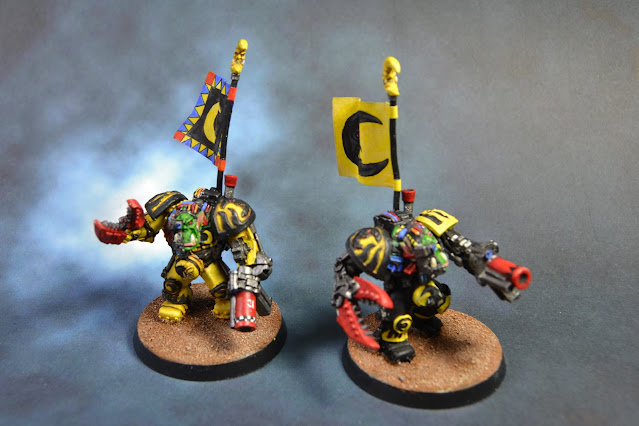 As usual, the photos appear to have burnt the colours and all the highlights (sigh).

Though I have some of the new models, I still believe these old ones are pretty much better. They have a distinctive appearance; alien, primitive, whatever... but not the current scrap dealer lookings.

Real Lifetm is becoming a little demanding these days, but I'll try to keep up posting!

Between the times when the oceans drank Atlantis...

I really should begin quoting the novel: '﻿Know, oh prince, that between the years when the oceans drank Atlantis and the gleaming cities...'
But this is about the movie, so let the silence be heard; the lone drum... and Mako's deep voice:

'Between the time when the oceans drank Atlantis, and the rise of the sons of Aryas, there was an age undreamed of. And onto this, Conan, destined to wear the jeweled crown of Aquilonia upon a troubled brow. It is I, his chronicler, who alone can tell thee of his saga. Let me tell you of these days of high adventure!'
﻿I have to ask you to be indulgent with this model. I painted it loooong years ago (maybe about fifteen? Maybe even almost up to twenty; it should have been about the early-mid nineties, give or take). It was my first non-28mm., a 54mm. model by Andrea Miniatures.

This obviously needs﻿ being repainted, but I still wanted to show it to you, as I'm a huge fan of the character and the movie. I mean the only movie that has been shot. Nope, there has not been any sequel. Nor any reboot. Only one Conan movie was ever shot.
Only. One.

I have lots (tons!) of pending work on my queue, but I must find some room for this model again...

You're my only hope

'This is our most desperate hour. Help me, Obi-Wan Kenobi. You're my only hope'.

A little break up from Warhammer for a change :)

This is the 72mm. model by Knightmodels, purchased before they dropped the Star Wars license. Gorgeous sculpt, as usual. If only my skills were up to it...
I painted this﻿ some time ago (some years in fact!) and it was my very first attempt of painting sourced light on clothes and skin. I was a little bit lost at the beginning, but the only way to learn is making mistakes!
I didn't want to overdo the light effect. At the moment I was reasonably satisfied, but now I see it again and I find all the mistakes I made (well, I find some of them, I haven't learned about the rest...). The light transitions are too rough, the model needs more reflected light, smoother transitions and definitely more shades.
In spite of all that, I still find the model really, really great. It is on my shelf, waiting for me finding the skills (and courage) to repaint it properly.

What do we have today? Some Stomboyz! Grey and in proper uniform.

I also had some Kommandos, but they needed a Nob (or a Kaptain). I had this plastic new one, and it was calling for a konvershun: 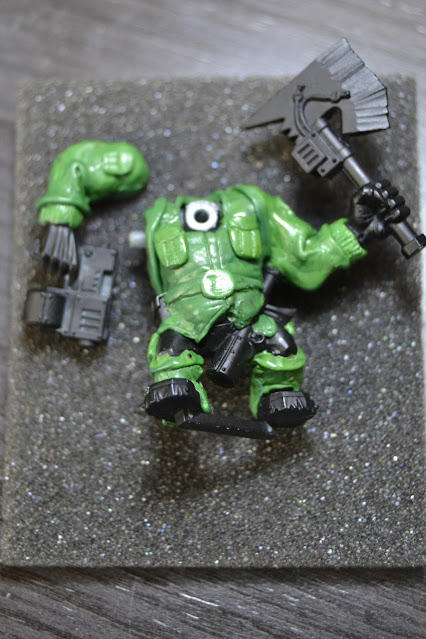 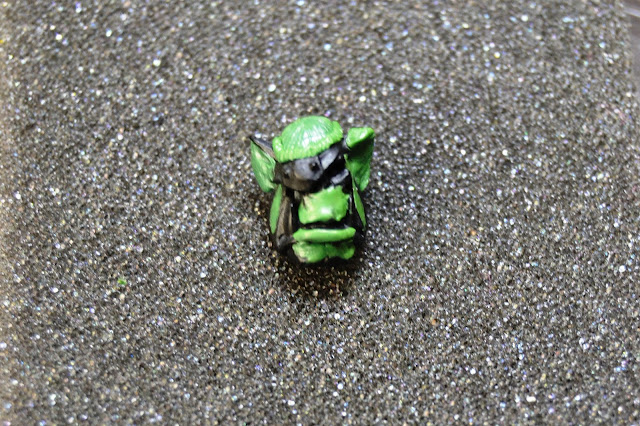 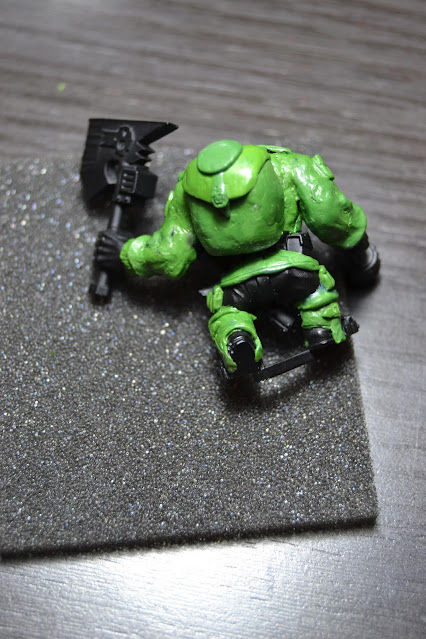 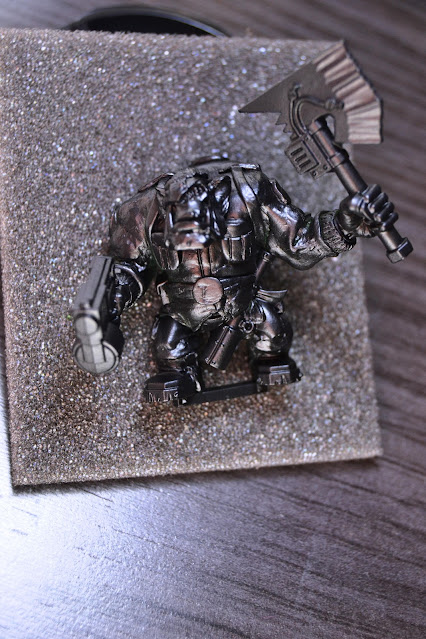 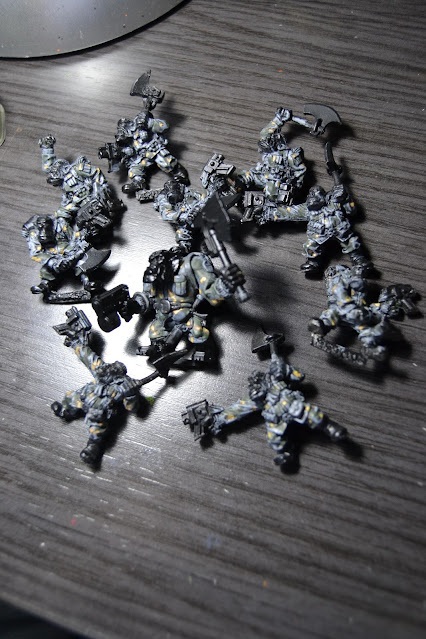 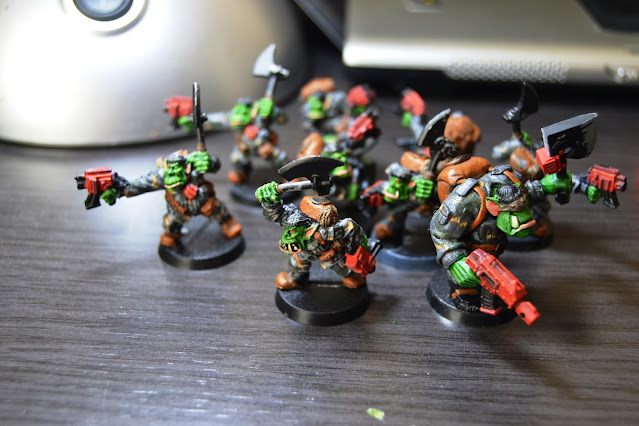 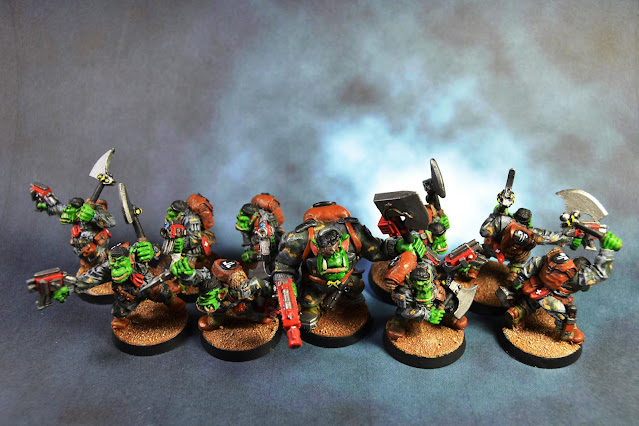 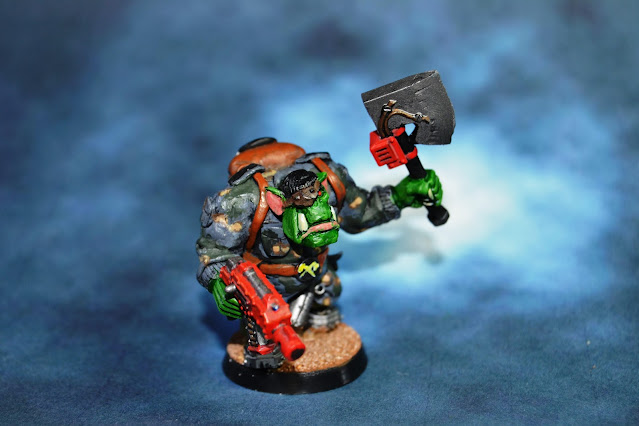 This is all for today. Moar stuff komin' zoon!

Heeere it is, the promised battle: Five bold and brave marines against an Ork horde.

We didn't use any special 'movie marines' rule (that will be another day, you'll see what I'm talking about...), but just regular 2nd Ed. rules, with only one single exception, the one regarding 'Squad coherency' (the distance between the Marines): they could act as individual characters, not necessarily as a Squad. We used the 'Perimeter defence' scenario from the Armageddon booklet, but with our own minis. 5 Space Marines vs. 20 Orks. The Space Marines must kill as many Orks as possible, and the Orks must kill the missile launcher (and as many Marines as possible, of course!). So this is it:
The Space Marines begun their first turn by making 'rapid fire', i.e., holding steady and shooting accurately, gunning Orks down.
They suffered heavy casualties and a squad was forced to fall back.
﻿
But the other two squads surrounded the battlefield taking advantage of cover

The missile launcher opened fire, but the shoot scattered.

The central offensive was totally smashed down
But the Orks on the flank advanced and threw a grenade:
The Sergeant engaged in hand-to-hand combat, eviscerating some Orks with his huge chainblade:
He caused 25% casualties, so the Orks had to roll a leadership check. Then a glorious forgotten rule came back to life:
However, nothing really interesting happened. Meh.

On the flank we had another combat:

On the other side of the table, the Orks charged the missile launcher Marine. Everything was at stake here!
That's right, hindered by the heavy weapon, the Space Marine was in serious disadvantage, and he finally fell overwhelmed by the numbers.

While the Orks on the flank kept on running, the central board ones attacked the Sergeant:
Encouraged by the recent killing, the Orks killed the Sarge too.
That was the end of turn 4 and the battle.
So the Space Marines got 2 victory points for their kills. The Orks got 1 point for killing 3 Marines, plus 2 other points for having killed the one with the missile launcher. Ork victory!

Once again it was terribly fun. Having a few minis on the board makes the game much more 'personal'. It looks more like an adventure than a battle. I would like to explore further both sides of that, the adventure scenario where a fistful of characters have to accomplish a mission against odds and the small battle/skirmish aspect of the game. I'll let you know whenever I play again and we'll see what we get then!

Hope you enjoyed our little battle!
Posted by Suber at 6.6.13 10 comments:

The veteran WH40K player will already know what is this all about, but let me make a brief introduction for the rest. In the Warhammer 40,000 universe, the Imperium of Mankind counts with the best of the best troops ever, the Space Marines. They are genetically modified humans able of almost anything imaginable and, according to the background, they are real giants amongst the rest of mankind, towering warriors with their distinctive bulky armour.
However, the actual minis do not show that, and the Space Marines are just as tall as any normal human (and their rules don't show them as the killing machines they are!). I've been trying to solve that for many years, inspired by true genius sculptors all over internet.
Alongside the resident contributor of this blog, KeyanSark (man, I should post a label with your name!), we faced (another) absurdly fun project some time ago: We would build up a five men Squad of giant Marines in order to play them with those 'movie marines' rules that were released some years ago (in which the Marines were indestructible and acted as movie characters. We will talk about that another day...). I would sculpt and he would paint.

The idea was to have a Sergeant, a Champion, a heavy weapons man and two regular marines. This was what we got. These are the sculpts:
The Sergeant breast plate should be totally heroic: 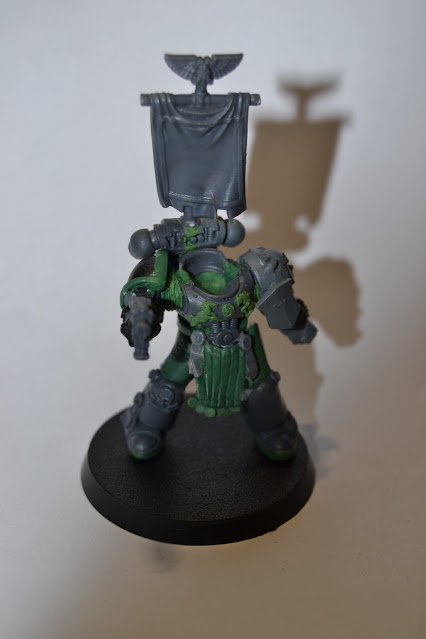 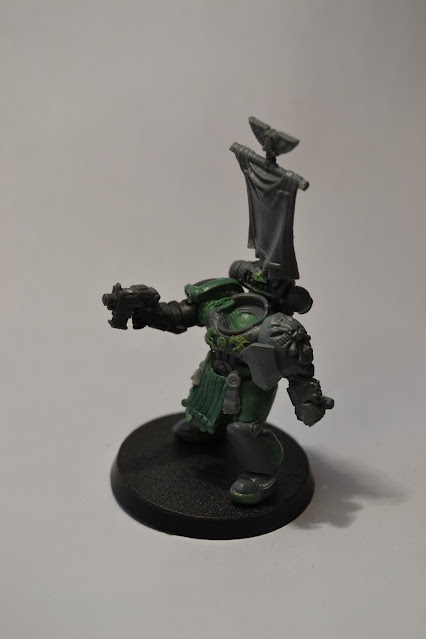 So should look the Champion:

Regular chainswords looked ridiculous in these beasts' hands, so I used two chainswords for the Sarge's weapon: 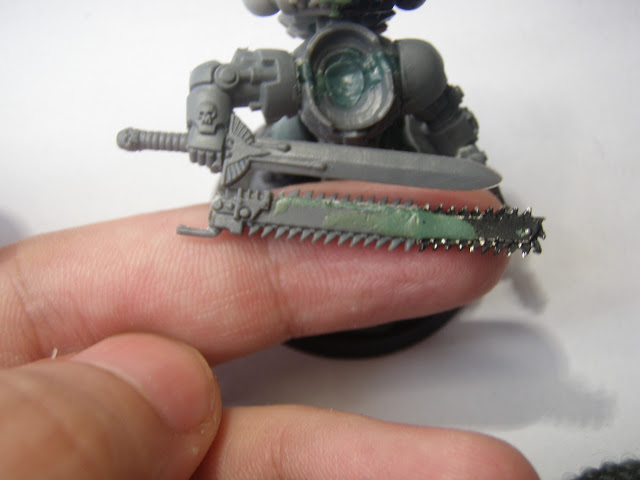 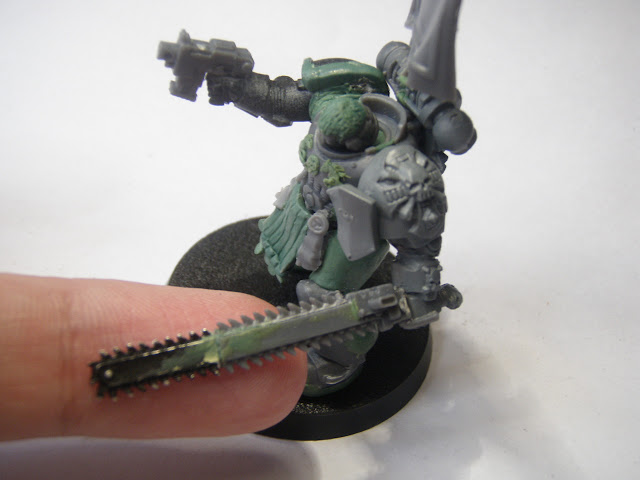 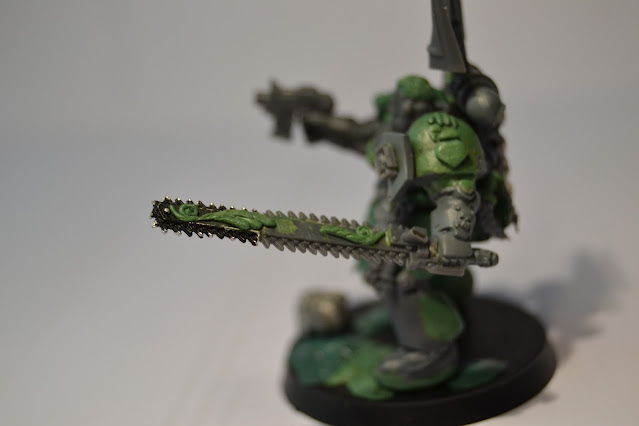 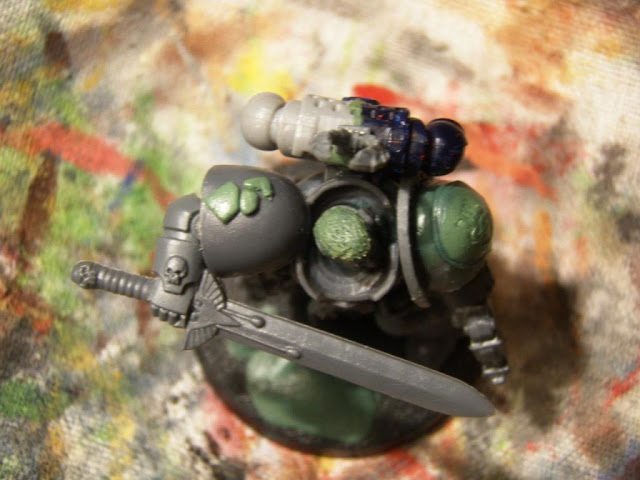 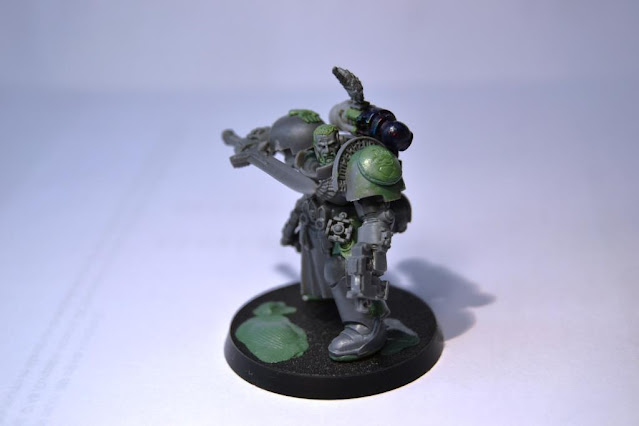 The 'regular' Space Marines were as bulky as the characters:

I've learned later on that the backpack thing is not necessary, as regular ones work nice. Another leason learned.
It happened otherwise with the missile launcher. The normal one looked petty when held by a realscale marine, so I added a plastic piece to make it look 'normal'.
This was my first take on this other guy


Now you are asking: 'how do they look next to a 'normal' marine? Do they look as big as you pretended?' Well, I'll let you judge:
And the group photo:
Did you like them? Then wait to see what did Keyan achieve: 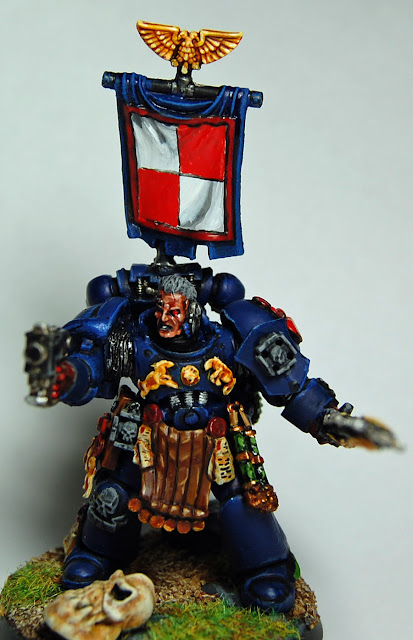 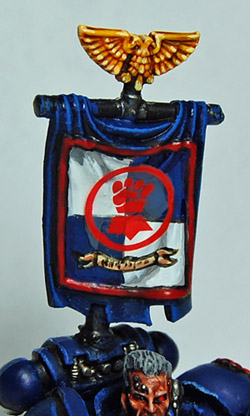 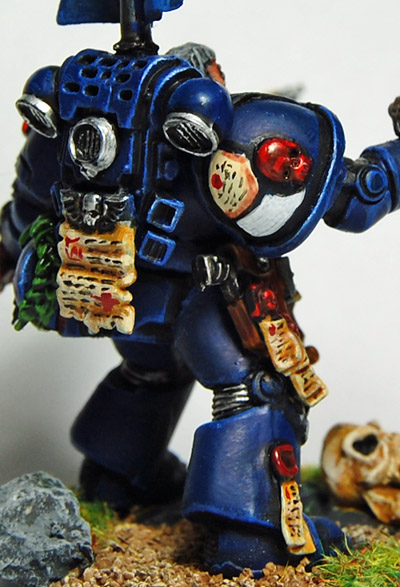 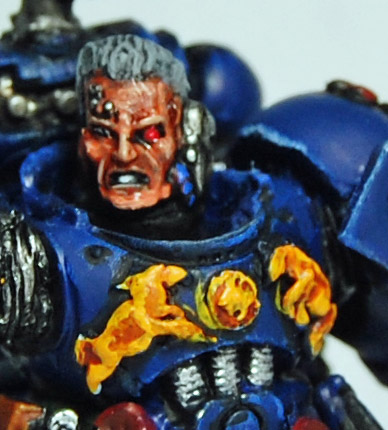 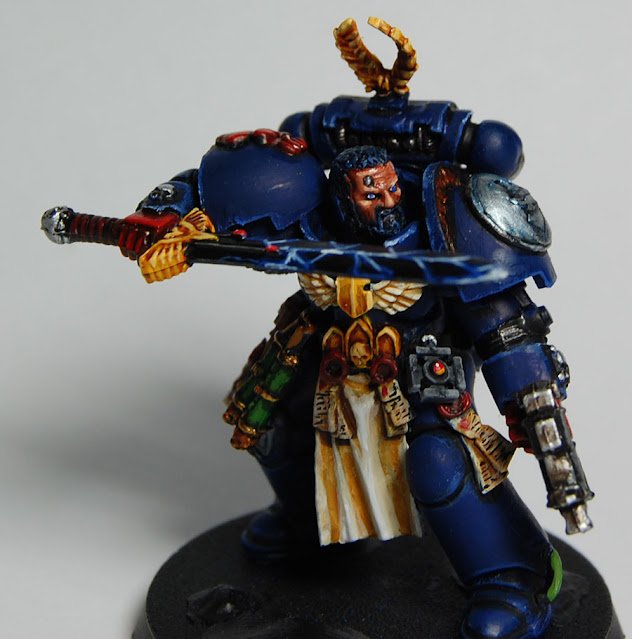 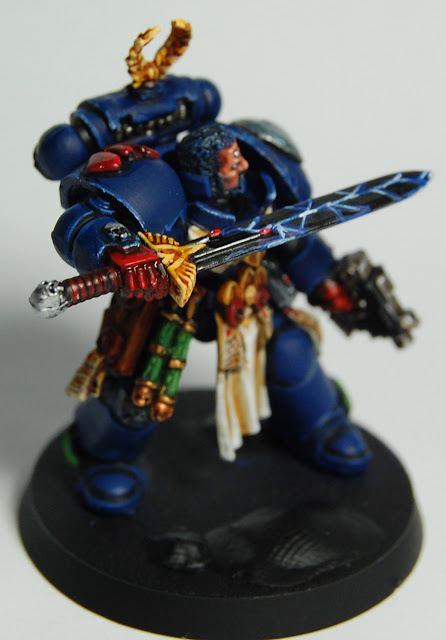 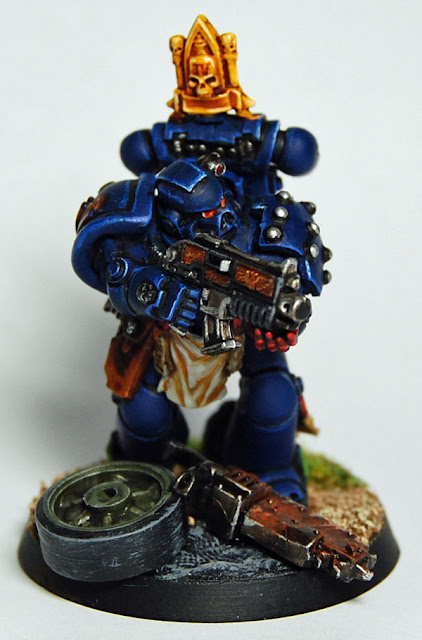 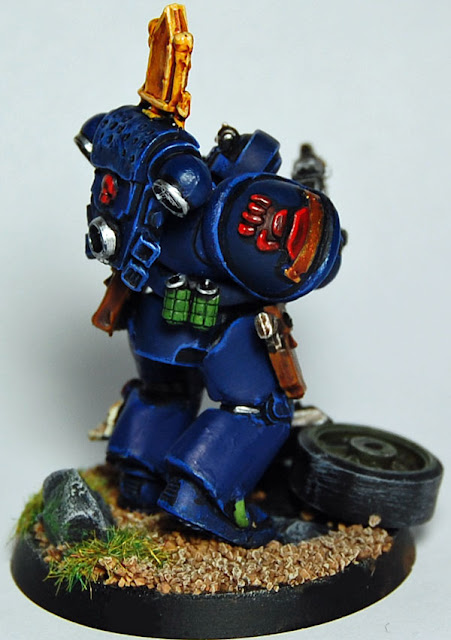 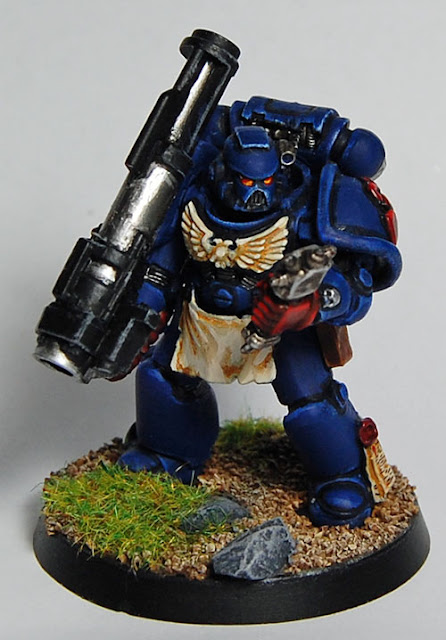 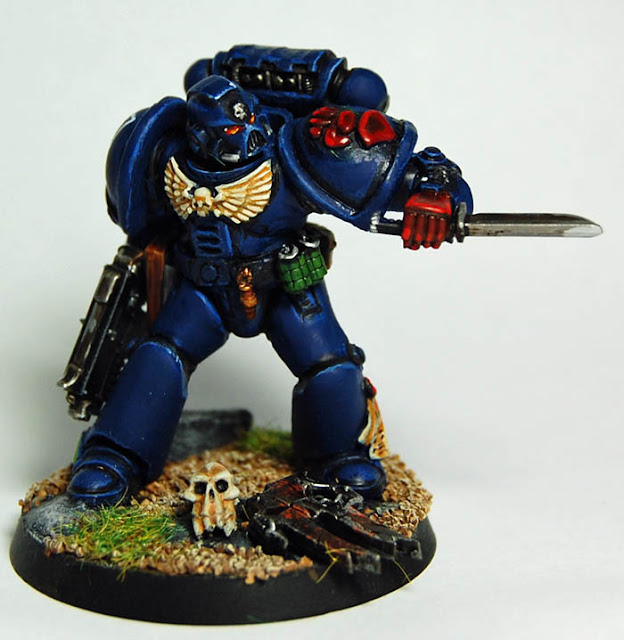 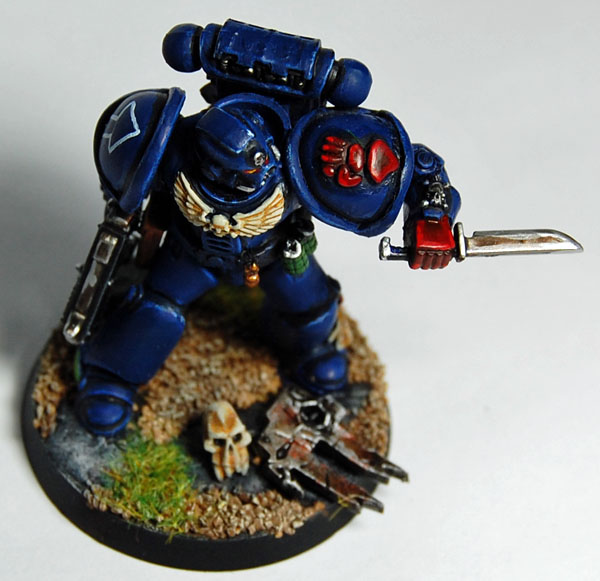 We made up a name and a full story for each one of them, making real heroes of them with their own background, but I'll talk about it another day, this entry is becoming too long now...

For the moment let them be just as they are:
I promise you will see them in action soon, quite soon...