Alert! Unexpected project incoming! As you can see from the title, it's something totally different from my usual stuff. I'm taking this big step and yes, I'm entering into the domain of... (breathe) Historical. Nautical. Models. That's it, I said it.

Right, it's true, this is not my first time with ships, OK. But this time it's a totally different adventure! The title was not clickbait, I'm starting an Athenian trireme in 28mm scale. Behold!

But where did I get that ship from? What company makes such a monster that size? Well, let's start from the beginning.

You may remember my pal Rinahe from El Taller de Emilque. Well, I guess you may as well not remember him, but if I tell you that he was the man who built the 28mm scale Ork Gargant, that might ring a bell ;)

So he designed and built the trireme from scratch (again!).

Please do check his blog, he has been building ships for the last couple of years and there is some genuinely impressive stuff there. Here is the post about the ship we are talking about today. Let me add just a couple of pics about the process, but all the credit goes to that genius.

Please let me insist, check his blog. I think he even might be open to accept commissions. You need a ship, you only didn't know until today.

So, until now you've seen Rinahe's awesome work. It's my turn now!

Let's start thinking of what will I need...

There are a lot of wooden surfaces here. I had to make some decisions about painting. As I was terrified of screwing it all just at the very beginning of the work, I made some experiments in advance. The whole deck is made of coffee stirrers and pieces of the like. So I got some coffe stirrers of my own and conducted some tests. In the pic below you can see my train of thought. On the left, brown paint directly applied on the wooden surface (different paint/water proportions). The same on the right, but having previously primed it with white spray.

Good thing I did that. I immediately learned that under no circumstance you should ever use priming on wood. It just acts as a sealer and paint will never really cover the surface. The thing is that I wasn't really impressed by the colour of mere paint over wood. I didn't think I was on the right pace.

A wise mind would have been patient enough to buy different wood varnishes and try some more experiments. As I of course do not have such a mind (nor the patience!), simply went wild and tried some watered Agrax Earthshade on a stirrer:

Diluted Agrax it was then! Trust me, at this point I was almost ready to simply spill my coffee over the deck...

So I think it was working! Phew! This was kind of my main concern, how to treat the wooden decks. But the next step was as challenging as the previous one, if not a little bit more. I had to decide what colours was I going to use.

The thing is that there is little or no reliable archaeological evidence about the lookings of triremes. All of the art you will find is based on loose descriptions (sometimes from centuries later) or extrapolations from other elements in the regular life of Classic Greece. As per the illustrations above, you can see artists tend to favour the use of red. But no one can tell for sure. Red was used by Roman warships many centuries later, but there is no way to support the statement that Greek (and I know I'm extremely misusing that word here, sorry!) ships were actually painted red. Of course it looks nice, it makes a beautiful contrast with the colour of the sea, it's fantastic for illustrations... but little else.

From time to time you can find bolder patterns:

Digression: Regarding the use of blue, there is a lot of (false) debate about if ancient Greeks (sorry again for using "Greeks" in such an inaccurate way) or other cultures perceived the colour blue the same way we do. You may have read that Homer never uses the term 'blue' or anything similar (as opposite to other colours like white, black, red, yellow... which are clearly present in the texts). The Iliad or the Odyssey speak of the sea being 'wine-dark' or contain vivid metaphores to speak about the sky, but never using 'blue'. That, alongside with the fact that Homer sometimes speaks of green honey or sheep being violet, led to some academics in the 19th century to believe that ancient Greeks were colourblind, or at least weren't able to perceive colours as we do now.

Well, long story short, no. Not really. Those theories led to tons of pseudo-scientific shit, but that's another story. Ancient cultures simply didn't develop specific words for that colour for quite some time. But there's a word for blue in Ancient Greek (c. 5th century BC), κύανος (kyanos), which romans latinised as cyanus (sounds more familiar?). Well, something similar happened with colours brown and grey, but I'm not starting a blog on languages, so I'll just stop being pedantic and will focus on painting the ship.

What I was trying to say before I lost my path is that there's no actual evidence of accurate decoration of triremes, so I could have quite a wide degree of freedom. So here you have my reasoning:

While building the ship, Rinahe asked me to think of her background. Her name, her history. Among the many options he provided me (and after some puny research of my own), I finally chose the name Agreousa, 'Huntress', as being devoted to Artemis. She would hence be an agile ship. Aggressive, swift. You know, that kind of thing.

(NB: It is true that Artemis the Huntress is usually referred as Artemis Agrotera, but I think I'll keep the Agreousa as being technically correct.)

The colours for Artemis are the ones of the woods. Vivid greens. Don't worry, I won't give you another absurd speech about the difference between γλαυκός (glaukos) and later term khloros for different hues of green. Oh, my, I'm starting again.

I was sure I didn't want to use red. It's the ubiquitous colour everybody uses for ancient ships. I found these illustrations and I thought green looked so cool: 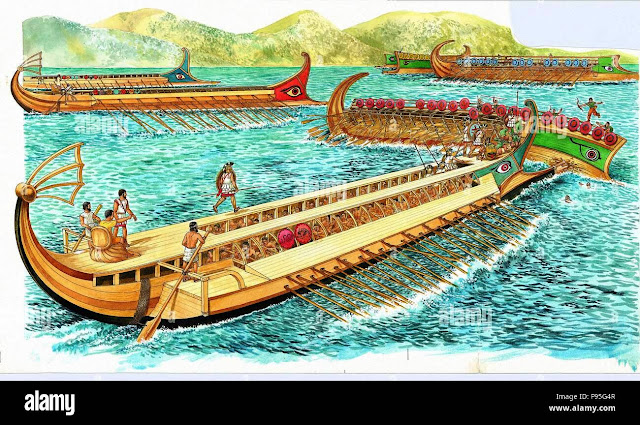 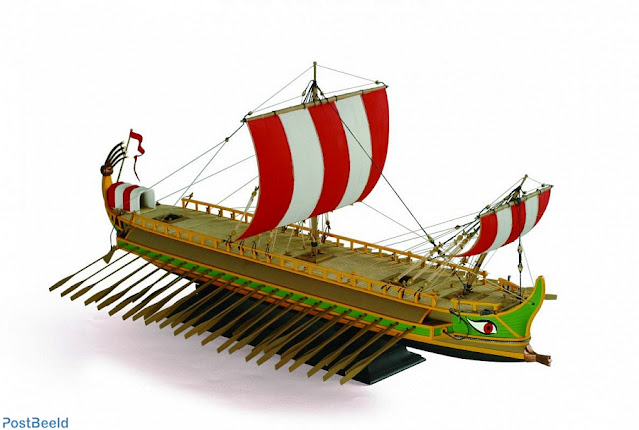 So let's spill some green paint on the ship!

The upper grade doesn't represent a wooden surface, but leather. It was placed there to cover the rowers. But I didn't think a brown/red would work there, as it would break the whole chromatic harmony. After some brief research of colouring leather in ancient Greece and Rome, I was confident to paint it green.

Once I had the base colour and the shades, I had to properly highlight this thing

Now, I had to weather that leather somehow, because it simply looked the same that the wooden parts. I used the Apothecary White Contrast paint to tone it down a little bit, like those awnings that have been exposed to the sun for a long time and look worned out and desaturated.

A brief word about that cardboard. Don't fear, it's not the actual base, it's just the reference for the size. We'll come to that in the future, not today.
More.
I painted the lower deck black:

Final step of this stage: the ram.
First of all I black coated the piece (it's made of plasticard) and then painted it in regular metal. Boltgun (or whatever it's called nowadays, Leadbelcher, I think) and silver highlights
And then I gave it a diluted coat of the brown Contrast (Snakebite Leather, is it called?). That gives it an impression of brass. So there she is, the Agreousa:

Well, I think this is enough for today! Next stages will include the decoration of the hull, the placing of anchors and oars, the base for the whole thing and the warriors fighting on her.

But I hope you will understand I need a tiny break for a few weeks. I'll be painting some different stuff before I get back to the Agreousa, but the project is now officially live!

Three Mekboyz walk into a Gargant...

After this strange Summer break, let's go back to some classics! Orks, for example!

I had a couple of Mekboyz (graceful donation by Iain from Caveadsum 1471) pending, and I also recovered this other ooold one I painted long years ago, when the Earth was young.

So you see, three Mekboyz walk into a Gargant.


Well, yes, I know, I have to learn to tell jokes.

Anyway, now I have some Mekaniaks, which are essential for any Warboss with some self-respect. Now I can think of adding weird vehicles and guns.

But I think I may do some different stuff before. Beware, a new project is coming...

A radical change today, both in subject and work! You've seen that I've been keeping a slow pace for a few months. You know, real life events and rest of boring stuff. I hope that things will begin to come back to normal in the next weeks (whatever "normal" means these days!).

While I haven't been able to paint as much as I would have liked, I've managed to draw a little bit again. I didn't have much materials, but my old reliable pencil and a ballpen were all I needed.

The initial sketch isn't that much impressive, so I think I'll show the final result first and then I'll go through the step by step:

The story behind is quite short. I've been out of home for work and wasn't able to travel with minis and paints. But I just couldn't stay idle. So one day I came out with this doodle on a tiny notebook:

That day I didn't have any regular A4 sheet of paper at hand, but I found this huge A3 calendar in the office and I said to myself: "hey, I've never worked on such a big paper, let's give it a try".

So you know, Fortune favours the bold (or, in my case, the fool). I got the A3 to the hotel and started with the pencils:

I won't claim I did anything original or good. This was simply my way back to drawing after long years of not having touched a pencil, and a way to fill in lost hours between hotels while working far from home. As soon as I got my eye on the A3 calendar sheet I knew the kind of project I wanted; something crowded, with one main action to focus on and maybe another one on the back. I was of course heavily influenced by the illustrations of old by mighty Tony Ackland or Tony Hough (Not that I'm claiming to compare to them, of course!!) and so I tried to fill everything. You know, horror vacui and all that.

Well, I was enormously rusty, but all in all, I'm happy of having met the pencil and pen again. It provided me an enormous amount of joy and relax, and that's all I ask of the hobby!

Now that I'm back home again I'm going back to regular minis and stuff. I don't know if I'll draw again anytime soon, but I'll let you know if that happens!