Two in one :)
First things first, let's talk about minis, which is what brought you here. The last step in my 'not Goblins but mutants instead' project was the mini of the alleged Great Goblin.

I left this one for the end as I was trying to make something slightly different than the other muties, but still in the same fashion. The mini itself is quite good and imposing, I just had to take the most of it. I thought I had two choices: either having a brute carrying a heavy weapon of some kind or making the boss this band was lacking. I suddenly understood the kind of mini I was meant to do.

I discarded some ideas, like a gladiatorial-like helmet or even having the Master sat on Blaster's neck. Nothing too blatant, a gas mask would fit in the theme but still giving a different look.

I hadn't used the little Goblin scribe on top of that weird catapult-like device. The trunk of that... thing would give a nasty look to this bloke:

That in fact gave me the idea for the rest of the path to follow. The tiny scribe was going to be the real ruler of this mutant mob. But, as just said, I wasn't going to simply put him on the big fella, that would have been predictable.

Now I miss one of those roll makers to provide some greenstuff wiring here. Anyway, being myself a resourceful junker, I found that I could use simple thread as well and that, in fact, it looked good.

That was it. Let's see how this big fat mess looks painted. Black priming and the same skin recipe used for his little cousins.

So with this I can declare the tribe of horrors finished! Ain't they pretty?

Well, given that I put the Dwarves to good use back in the day and I've also used the not-Goblins, I can say that getting that box was a good idea :D. I still have all the scenery untouched, but I hope I can find some use for that too... For the moment I just rejoice in the mutant clan.
Ahhh, there's something good about closing a project... That sense of easiness that mainly means... you can focus on the next thing on your list! :P

That brings me to the other subject I wanted to talk about. Today it's Old School Workshop's 4th anniversary!! Weee! Another whole year of posting has been fulfilled. Woah. Four years since I first started posting. 351.528 hits is a number I really need some time to assimilate. Don't know how many of those are bots, but I don't care, at least they are tasteful bots; until the day Skynet becoming self-aware arrives, you are welcome too. Wouldn't like anyone throwing speciesism charges on this blog solely for that.
US, Spain, UK, France and Germany keep on coping the top 5 visitors and, as of today, 178 Oldscholars are enlisted for this adventure. I've always stated that I don't blog for numbers, but of course having a look at those is enormously encouraging. Thank you all, people. All those who spend a minute having a look at my latest stupid project; special thanks to all who bother to comment, but those who simply stop by too. Appreciated.
Now for the fifth year! Lots more of silliness ahead. Thanks for being there sharing this with me!
Posted by Suber at 27.11.16 40 comments:

Email ThisBlogThis!Share to TwitterShare to FacebookShare to Pinterest
Labels: Mutants

Interlude: a Secret Santa out of time

I'm not inventing the wheel if I say that one of the many rewarding things about the hobby is building a community and having the chance to meet some wonderful people. Well, I don't think I even need to write about that. Many of you have already done it, way much better than I ever could. But let me tell you about my latest experience.
A group of my regular local partners in crime decided to set up a Secret Santa. Yeah, it was like August, but we can make Santa come whenever we decide :D. This week we all had received our respective mini, so we can go public at last.

Rules were easy. Just pick any infantry-size mini you have at home lost in oblivion. Paint it and send it (but in the return address we all agreed to use the name of the organizing pal, so the real sender would be kept anonymous).

Let me tell you first about what I did. The guy I was supposed to give the mini away is a huge fan of Napoleonics. His main (almost only) target minis are Napoleonics or maybe ACW. Ouch. I don't own any of those. I fear the day I truly make my way into historical games.
But I remembered I had something I could certainly use for the challenge. A mini of old that could at least shorten the gap between my regular stuff and Waterloo.

OK. So many things were wrong about this paintjob, and at so many levels, that I wouldn't know where to start. So I stripped it and begun all over.

I tried to source the mini, as I honestly didn't remember where it came from. Unfortunately my only clue was under the base.

So apparently this was a special limited release for the occasion. No trace of manufacturer and all my Google attempts have failed so far. Anyway, about the soldier itself, the base states 'Batallones de Cazadores 1848', so 'Chasseurs Battalions' (light infantry, essentially riflemen; long story short, originally designed to operate in a more independent way than the rigid XVIII Century formations, hence the term Cazador/Chasseur/Jaeger -i.e., 'hunter').

Well, OK. When I first painted it, looong time ago, I had little idea of uniforms of the era. I painted the guy in a much later fashion. For this time, now that the internet had been invented, research was much easier. I used the prints from the works of the Count of Clonard, so these were the proper uniforms:

OK, let's go then! Black priming and then first thing I usually paint is the face:

I had to improvise some greenstuff work. The plume and the backpack, as I never got them in the original mini.

So I finally came to this result: 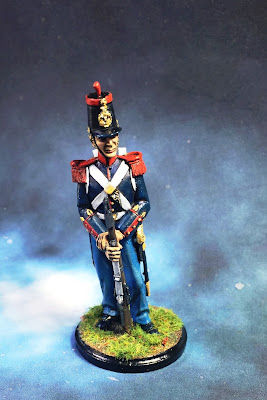 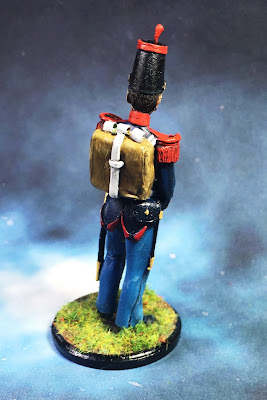 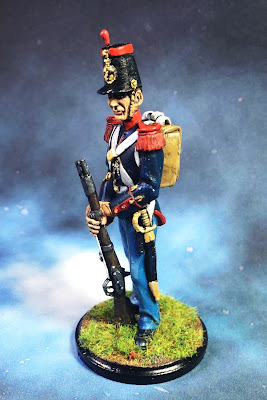 So this is it, a grenadier from a Batallón de Cazadores by 1848. Unfortunately I cannot be more precise about the Regiment/Battalion of origin. Anyway, I enjoyed pretty much painting such a different mini. Different scale, different style, different ambientation... I was taken out of my comfort zone... just to discover that I felt quite comfortable actually! Exhilarating experience by itself.
But of course this isn't all. The point here is sharing and bringing geeks together :D As far as I know my pal is happy with the mini, so that's quite rewarding too :)

Let's see what I got from my Secret Santa! No less than...

I love the mini, for so many reasons! Besides, Ragnar Blackmane is a real must in any collection and I didn't have him. So I'm really pleased, my Secret Santa made a 100% accurate decision on the mini and the paintjob. Thanks, man! :)
The only setback is that... I (still) don't have any Space Wolves! I foresee some space Vikings in my future... (ahhh) :P

Here you can see the rest of the minis involved. A little bit of everything! 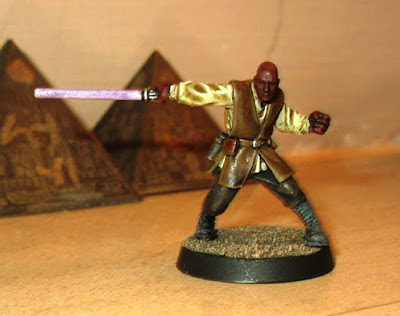 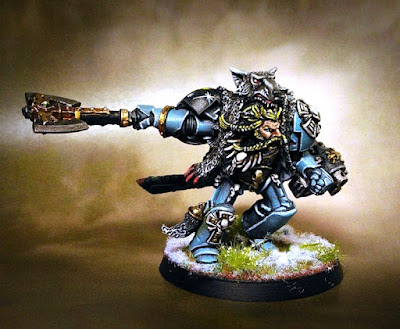 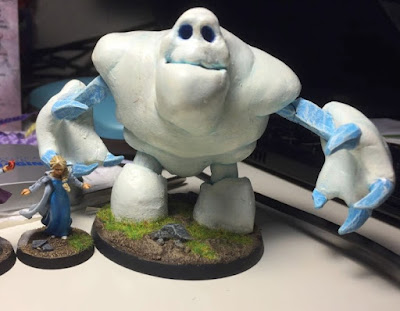 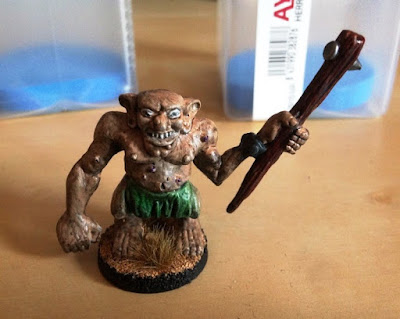 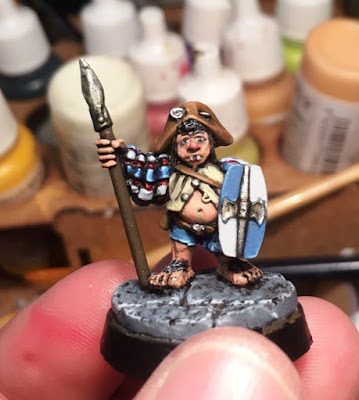 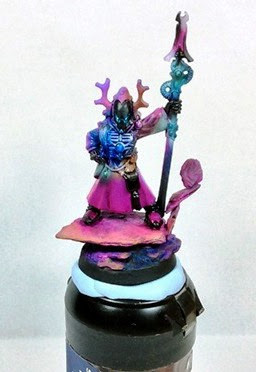 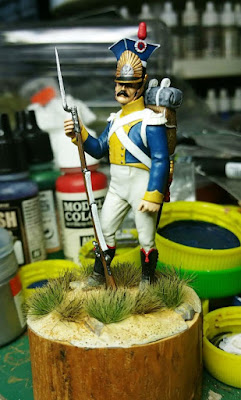 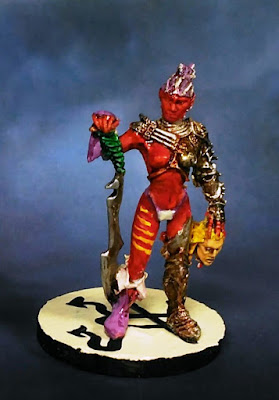 You can see it's all very eclectic! Within the group there are some master painters and some people who have taken a brush for the first time in their lives (quite meritory performance!). The experience has been great, I think we all as a group are really satisfied, so I guess we will be repeating the experience sometime in the future...
Posted by Suber at 19.11.16 14 comments:

I've been trying to speed up this project and I've made some progress. I've finished the remaining infantry guys, so now I have a full tribe. Problem is that I totally forgot to take pics of the WIP :( I didn't realise until I was painting the first layer of skin tones. Sigh.

I'll try to explain at least what I've done. If I essentially used the goblin minis as they were for the first batch, just adding clothes and stuff, I dared to go a step beyond here. The minis are quite the very same, just another almost identical sprue, so I had to go further to add some variety. I used some spare Cultist heads from the Dark Vengeance set. I also kept on plundering the Skitarii box for heads, legs and bits, so I had some quite different poses. The head swaps make some of them particularly creepy, but I think it's part of their charm (if that word is ever applicable to them!). So, after that and some greenstuff all over, here you have the results: 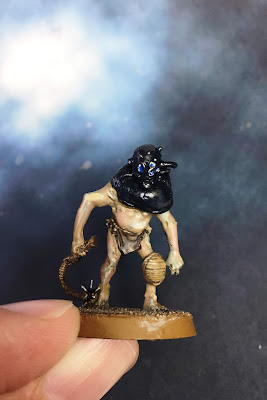 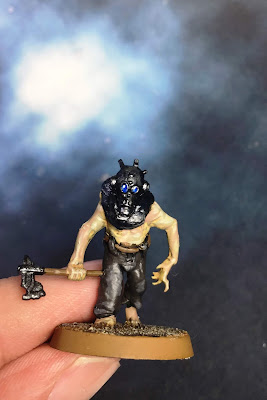 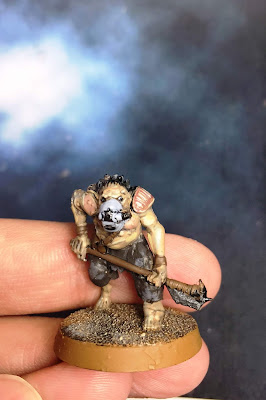 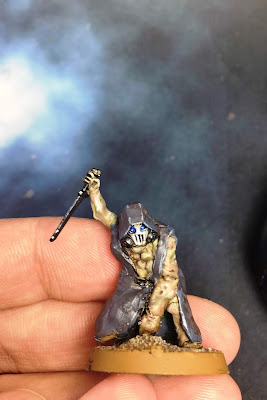 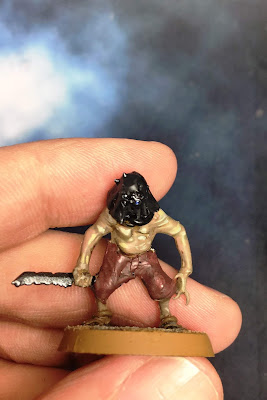 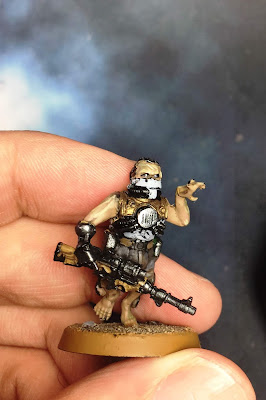 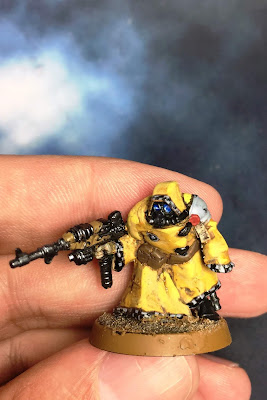 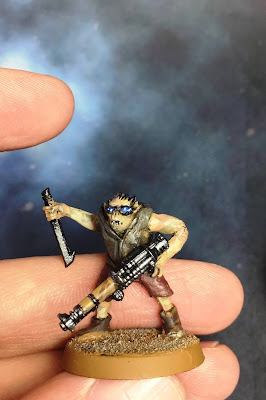 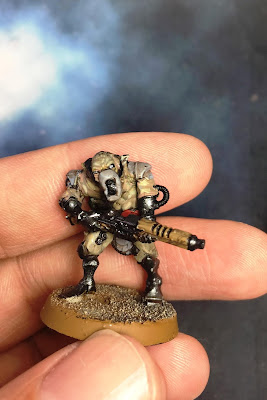 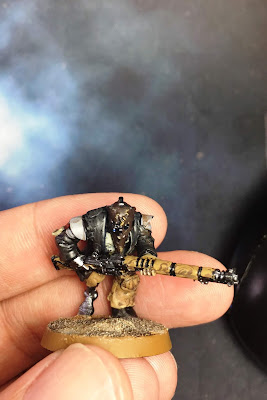 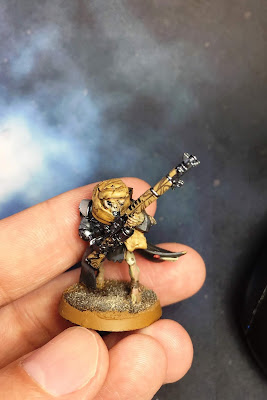 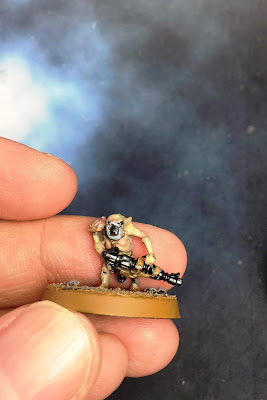 The combination of bits made some strange guys, but I think the weirder, the better :D

Email ThisBlogThis!Share to TwitterShare to FacebookShare to Pinterest
Labels: Mutants

Sometimes inspiration comes in strange ways. Some weeks ago I made a mistake and bought a different set of razor blades than the usual ones. Main difference is that the blister holding them is bulkier than my regular razor blades. No, wait, keep reading, I promise I'm going to the point right now. When I had it in my hands I suddenly knew I had to do something with it...

If you don't see the thing I envisioned then, just give me some narrow margin. I was suddenly struck by an image of childhood. GIJOE's Oktober Guard Six-Wheeler. I mean this:

You still don't see it. Well, cannot blame you. Some oyumaru and bits later, I came to this:

Greenstuff for the seats and more bits to make it look like what I was intending to achieve.

I didn't want a plain grey, but not a flashy red either. I thought this would look nice for its purpose:

So, with a couple of mutants from the batch I still have pending, this is what I got:

I decided to give it to the muties just because I'm with them at the moment, but the vehicle design (design... whatever) is neutral enough to fit in a number of bands or ambientations. Any civilian industrial carrier, or if you set proper guns on it, you can even give it some military purpose. In fact I think it can make its role for a Genestealer cult (wink, wink).

As I'm posting the pics I realise it needs license plates! Hm. That is to be solved. Anyway, I hope you find this, if not useful, at least funny! RT concept, recycling whatever you have at hand and making a tiny vehicle from scratch.
I'm with the rest of the mutants, hopefully coming soon!
Posted by Suber at 3.11.16 40 comments: