Transport through the wastelands

Scratchbuilding day! Some time ago I saw this awesome work by Master Converter Axiom. Wow. I kept the Taurox tracks since the days when I converted one using wheels. So, no need to say, I had to shamelessly copy his work. But it took me some time to get started. Until one day... well, one night, to be honest, the idea came by itself. It came with some beer, as many silly ideas in the history of mankind. I could build a tanker truck, using the very can I had just emptied:

I had to paint some stuff before I could keep on working:

With that part done, I started to think about the rest of the... thing. It clearly needed some kind of platform on top, so people could fight (that's essential, as anyone can tell):

Now, the tanker itself is too empty. Looking for some rubbish alternative bits I found a strange straw and a ballpen recharge:


Of course it's way too clean. No one would believe this tanker travels through the wasteland from hive city to hive city...


However, it still needs some... life. This calls for some detailing. That means tubes, of course:

After this, I just added random bits here and there, until I got this final result: 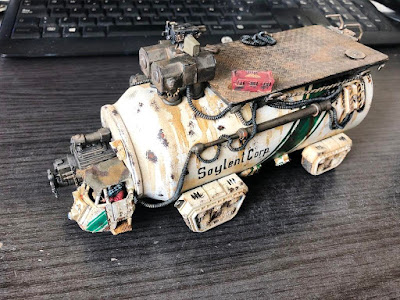 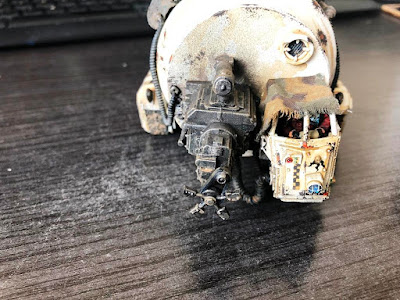 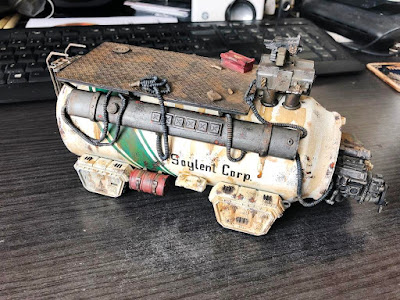 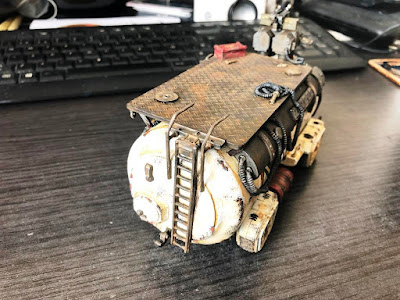 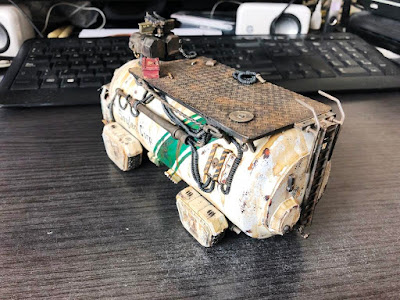 Transport through the wasteland deserts is no easy job. But hives have to receive all kind of supplies. Some of them are transported using different cargo ships, but some other goods have to be carried using good old fashioned trucks of all kind. Anyone trying to make profit of this bussiness has to bear in mind that transit through the ash wastes, toxic wastelands and rocky deserts means some inherent perils, so even the most innocent cargo truck needs some protection. Long caravans are usually set up and the drivers or the company owners pay for some hired guns to escort the goods and make sure that they arrive safely. All kind of bandits, desert pirates, wasteland natives or desert beasts can attack the caravans, so protection is not to be taken lightly.


My mind is bursting with the possibilities of this. Will I dare to build a whole caravan and its hired guns? Will the Genestealer Cult/Feral Orks/whoever comes by attack them? Will Don Quirixote of Manchae Prime ride to defend the honour of the damsels in distress who travel along in such a majestic carriage?
Oh, my, oh my. Breathe... Breathe slowly...
Posted by Suber at 27.1.19 32 comments:

This game has not been particularly advertised as it is usual; in fact I had not know of its existence until a couple of weeks before my pal told me he got a copy. I heard people speaking highly of it, so it was a matter of necessity playing it! So say we all. 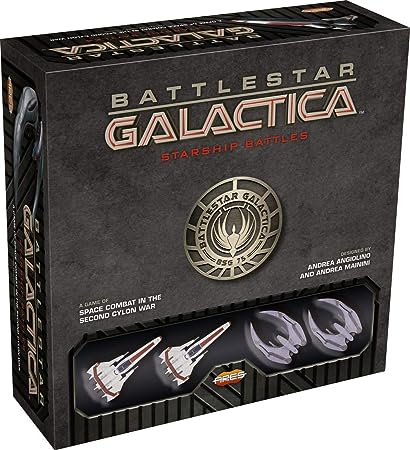 Your first thought will most probably be 'Hey, that's X-Wing, but in Galactica'. Let me tell you it is definitely not. Yes, you have a couple of fighters per side, you plan your movements in advance and you shoot. But there's much more to this game. I don't pretend to give a full review (you can download the rulebook from the Ares webpage and nothing beats reading the rules first hand), but I will try to give my impressions on the game. 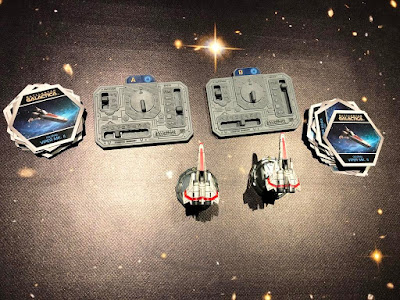 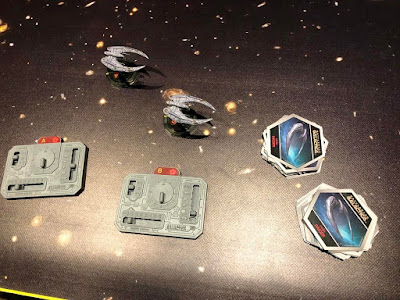 Each ship has a control panel and a deck of maneuver cards. The panel control has some things you have to keep in mind. The most obvious one will be the setting on the right, going from FTL (Cylon Raiders only) down to high/medium/low speed and then to stationary and even backwards.
The round piece in the center is the rotation dial (as you can move in one direction and rotate as you fly -just like in the series, you'll see examples of that, trust me).
The kinetic energy slider down in the panel is quite a thing to bear in mind each turn; you will not be able to use maneuver cards with a total kinetic energy value higher than your kinetic energy value plus tour acceleration (or lower than your current value minus the acceleration). Sounds complicated, but it is not. It's just a way to make you aware that your spaceship has limitations and you cannot plan absurdly bold moves that would tear apart your body under the pressure of G value.
Finally, the up left part is a level slider, in order to make the game fully 3D. It's an optional rule, and we didn't use it; my pal had already played, but it was my first introductory game, so I already had some stuff to hold before making it all more complicated.


The turn is divided in three rounds. You plan your movement, you move and then you fire. When playing the complete rules (not just the quick ones), the rounds are slightly different: first move, first fire, second move (if applicable) and second fire (if you didn't fire in the first round). To plan your moves you will use the maneuver cards:

You can see there are differences in the movement on the same basic maneuvers, depending on your speed. There are 'overboost' cards, which allow you to draw a second card; 'difficult maneuver' cards, which don't allow another difficult maneuver nor an overboost card next turn (there are exceptions, but you get the idea).
The star card is just for bluffing. If you see your opponent drawing two cards, you will assume there will be an overboost move. Well, not necessarily ;)
The radar is a mandatory card if you want to reposition your ship after a rotation. We'll get to that eventually.

Let's see how all this fits into a game, it will be easier...


My opponent decided to start the game with one Raider out of the board, making a FTL jump as his first move. No need, just for the show [Dramatic drum music here].

Then roll two dice. Check the result. If it's equal or higher than your ship's attack value (usually 6, but keep the modifiers in mind; not only range, but if your target's kinetic energy is 4+, that kind of thing), you made a hit.
Neither of us got anything this time, so I'll have to explain damage rules later!
Let's see what happens with the other couple:


In the case above, the ship did not plan any movement, just let itself go by pure intertia; hence the mere straight movement.
I had rotated my Viper too, but I wanted to change route, i.e., move forward in the new direction. It takes some extra movement in your previous direction, determined by your kinetic energy and measured with a drift ruler:


I planned a cunning move with the Viper on the right. See, see:


So this is the real fun of the game, planning your moves ahead and trying to guess what your opponent is going to do. As you can see, I was pretty naive and these mistakes are likely to not give second chances, glups.

Nothing happened in the shooting phase. Phew. New turn.

The other Cylon made a FTL jump. Suddenly the balance was totally broken:

We can have a look at damage. When you receive a hit, you draw a random damage counter and look its value, but without revealing it to your opponent. That way, whenever you hit your enemy you can tell you did something, but you can't tell how bad you damaged the other ship.
If the token you draw has a '+' sign, then you must immediately draw a second counter (if it has a '+' too, you don't have to draw a third one). So there will be some times in which you can guess you caused some serious harm to your enemy, but without being able to tell exactly. This adds some realism and emotion to the battle, I really like that.

Damage Counters can go from 0 to 6, so you can receive a hit and get nothing or be in serious trouble. There can be special tokens (damage on the wings or whatever, with additional effects)
In the pic below you can see what happened to my Viper on my right flank. I had already received a hit (3 damage points). But now I got a 4+, so I had to draw a second token. Oh, Lords of Kobol!

So, the damaged Viper was in distress and the other one hurried to get closer.

You see those two ships so close in the pic above? Let me explain what happened next. I thought the Raider woud finally move forward instead of letting itself go with inertia, as it had done the two previous turns.

Another movie moment. I rotated my Viper 180 degrees and waited for the Raider to be in shooting range...

I think this gets the series vibe pretty accurately. Such moments call for desperate, bold maneuvers, and they sometimes end quite spectacularly. Anyway, as you can see in the pic above, I had hit my opponent many times, but he had drawn 0 damage not once, but twice. But he got a 6 too, and he suddenly got two damages in a row thanks to the + sign, so a ship can last for hours or be obliterated in a centon (that's an obscure reference, hehe).

The other Cylon was close to be destroyed too, but things went this way and I definitely lost. Mankind is a step closer to its extinction! Will what's left of the Colonies endure? We'll have to see in next chapter!

The game is enormously cool. You can see there are some quite cinematic moments, which translate in lots of fun. Tension can grow in seconds and anything can really happen. The complete rules can be learned easily and they add a lot of depth to the game, I strongly recommend them and not yet the basic core rules alone. This game took about a couple of hours, including the time for me to learn how to play; so it was great in the end.
You can see I made some serious mistakes, but also learned (from the bitter experience!) to make things work once I was familiar with what I could do. I guess the most obvious comparison is to be made with X-Wing. You can see the philosophy behind has some things in common (they both deal with fighters and dogfights in space!), but this Galactica game relies less in characters and special features (though I suspect they will eventually come as expansions if the core box sells well) and has quite more depth in maneuver and general movement terms. The fact of everything being done simultaneously and not depending on initiative or prowess is another important factor, as you won't be able to play the card of knowing that your uberpilot will do the hard work first. You have to think of your turn quite differently and then let your plans simply happen.