Time to let Ol' Painless out of the bag

Once I've finished the monstrous Gargant, I'm clearly in the mood for much smaller stuff. I can't face another large project right now, so I believe I can take the opportunity to paint single minis or any other kind of standalone project.

My palette cleanser today will be this "Ace" by Hasslefree Miniatures, a mini that have been waiting for some time to be painted:

I've heard that Hasslefree has been experiencing some delivery issues for some time now, but to be honest, it's been quite a long time since I last placed them an order (you know, my mountain of shame doesn't allow it) and I always got the best of them.
Whatever the case, the sculpt is simply magnificent, as usual. It of course resembles Blain from the Predator movie, though it's not an exact replica of the character.
I tried to get it as close as I could, so it meant those 80's Woodland fatigues:
Painting camo is always tricky. If you do it right, it will work and you will see a blurry object with no definite shapes (as that's what camo is supposed to do!). But you can't forget that you are painting a mini and that it should look good and distinctive on a board!
I used a soft green on all the other gear. It makes some shapes recognizable, I hope, but the camouflage itself is still there.
I finally made the kneepads, boots and weapon with different shades of black:
Little else! Here you have the final result: 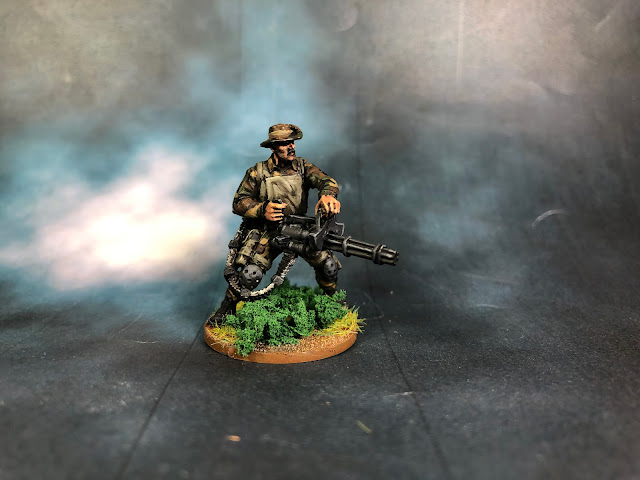 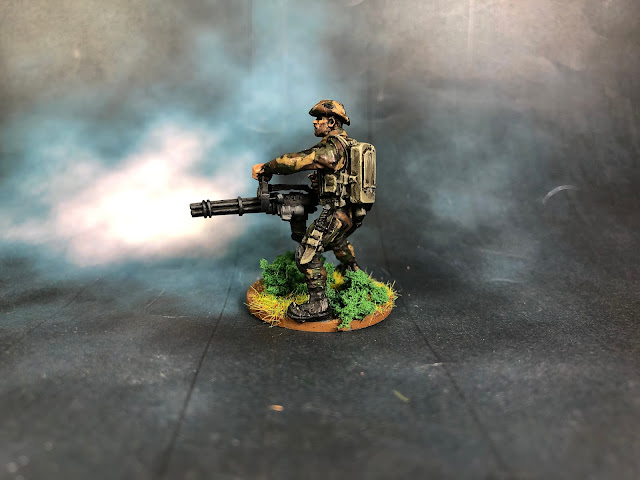 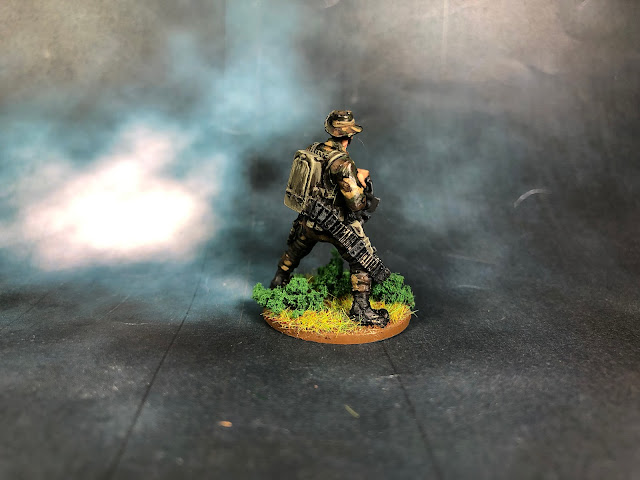 I have to say I was much happier before I saw the pics full screen, it makes all the mistakes awfully apparent :D
Anyway, quick'n'dirty job, so I'm happy with what I got. Let's get a comparison shot

I'm quite satisfied with having painted anything in kind of a week's time. It feels strangely good! I guess I'll paint a few more standalone minis before I come back to full units or whatever. Who knows!

So I had to do the box and the banner. Not minor endeavours, trust me. But with Mork's help (or maybe Gork's), it was achievable.

WARNING. TONS OF PICS AHEAD.

Let's go for the box!

First thing to do was primer spraying it all over in metal:

When the air in the room was breathable again, like a couple of days later, I begun to paint the inside. Sorry, I forgot to take pics of the WIP. Not that you are losing that much, nevertheless, as I didn't want to overdo this part. I painted some random colours on random pieces and dirtied it all over. Some Ork glyphs and some hazard stripes are the only thing that required a little bit more attention.
I left the explosion of colour for the outer sides. First stage was applying the raw colours. here you can see the box from all the sides: 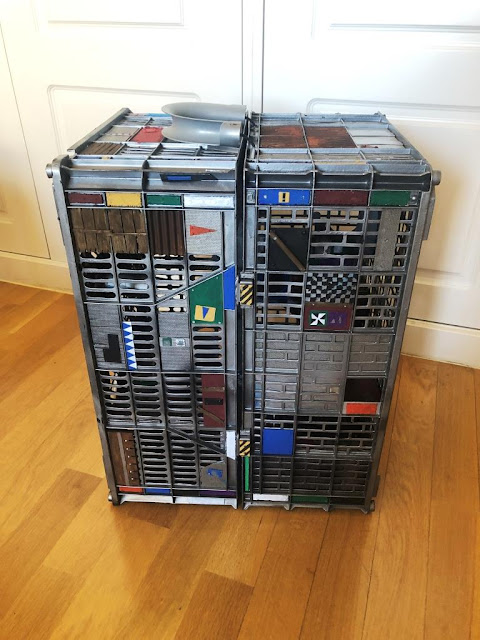 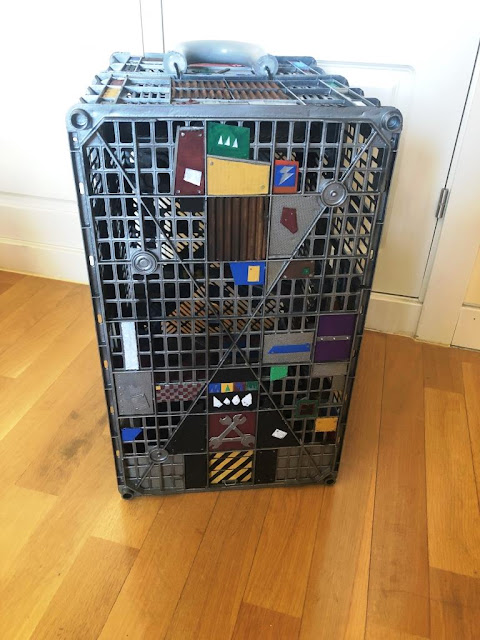 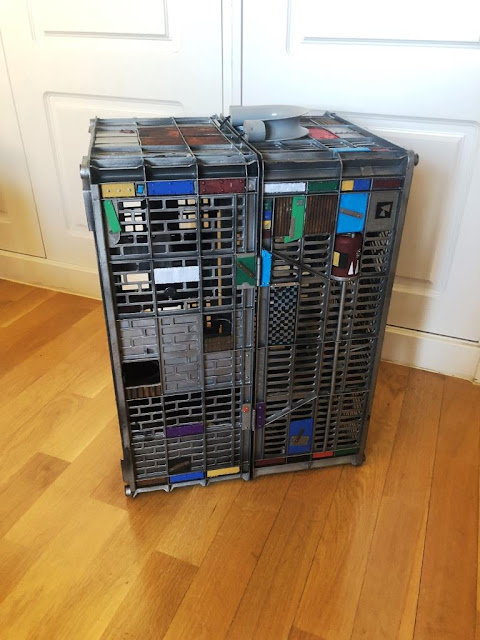 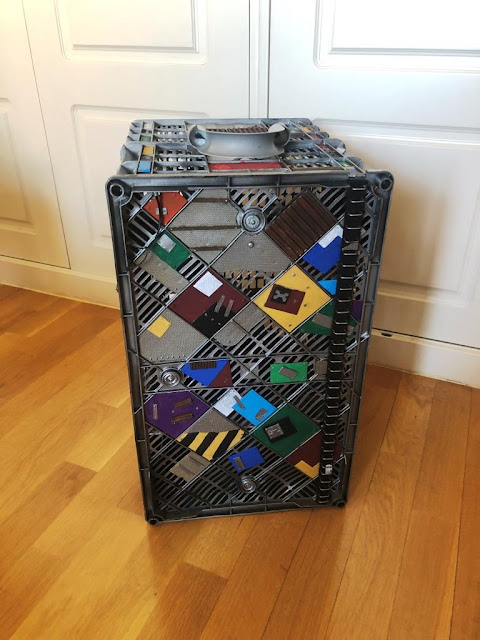 So clean that it hurts. Let's get hands (and everything else) dirty! 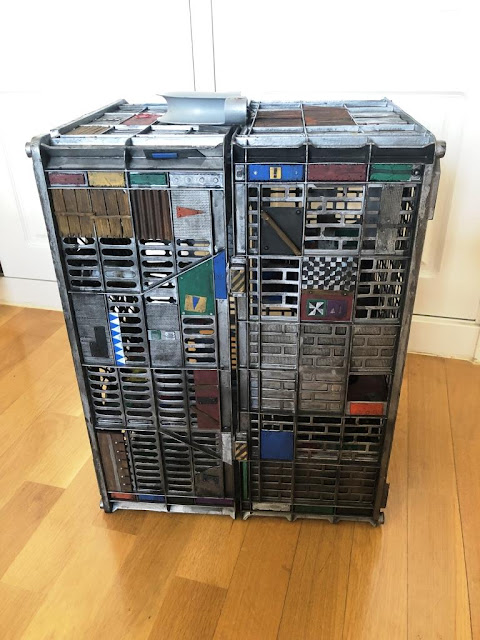 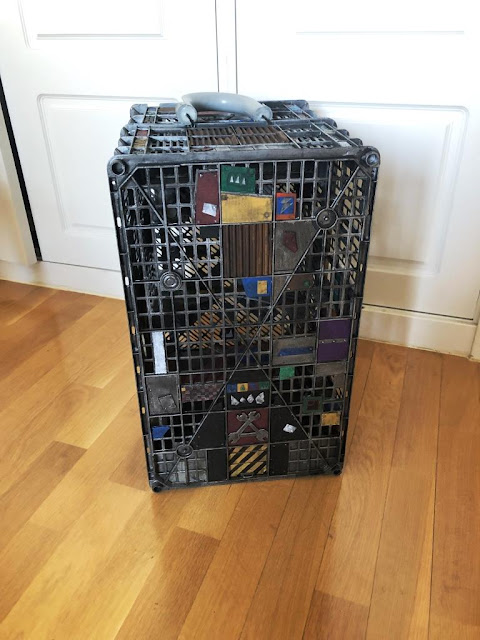 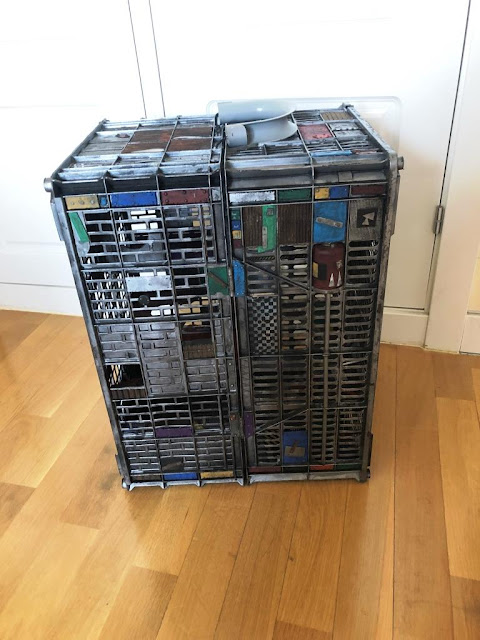 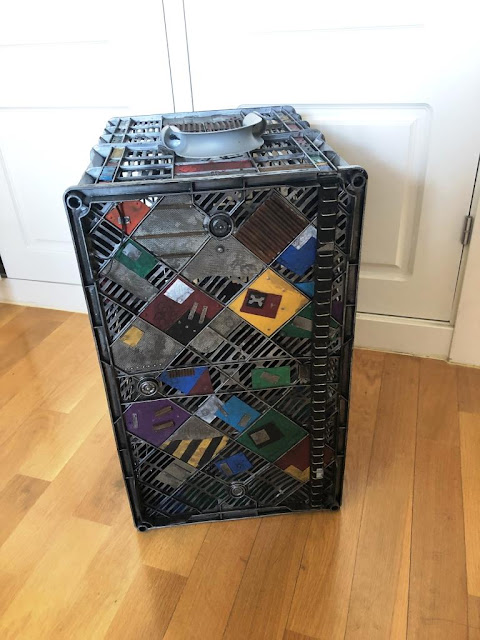 Working on this monster has been kind of challenging. I couldn't put it on the table, as it's way larger than my workspace. Painting it on the floor wasn't quite an option and I didn't have a proper stool or another similar surface. So I had to keep it between my knees, holding it under my only light source (I can only paint in the late, very late nights, and I can only count with this gooseneck lamp)

Here you have the finished box: 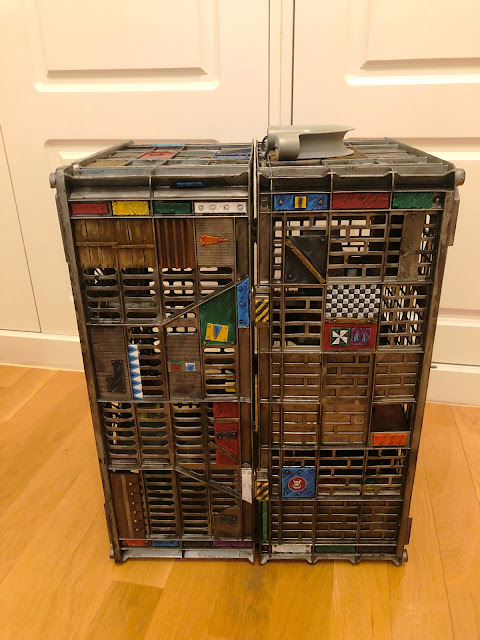 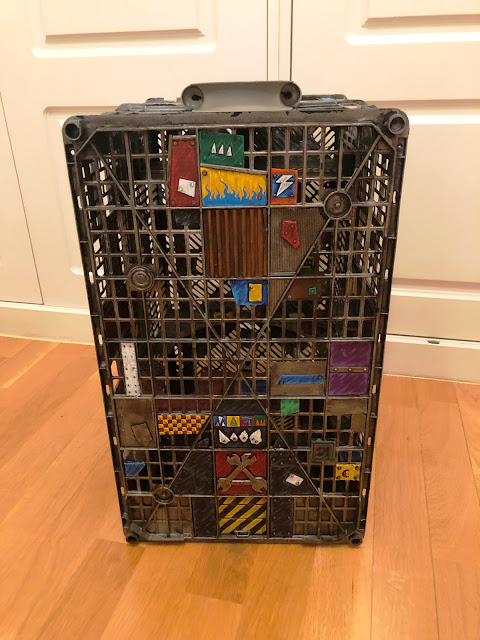 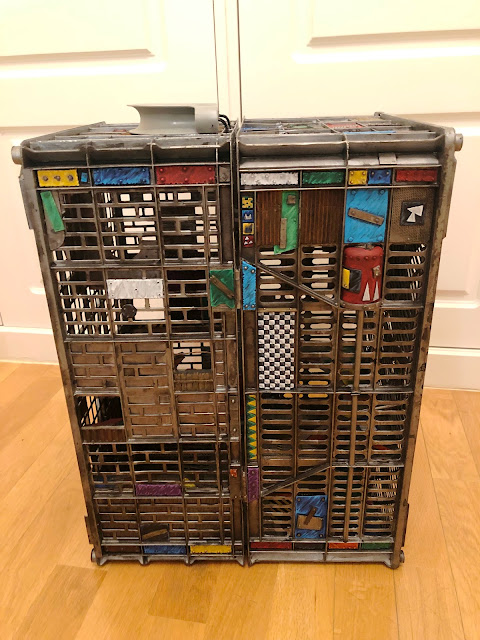 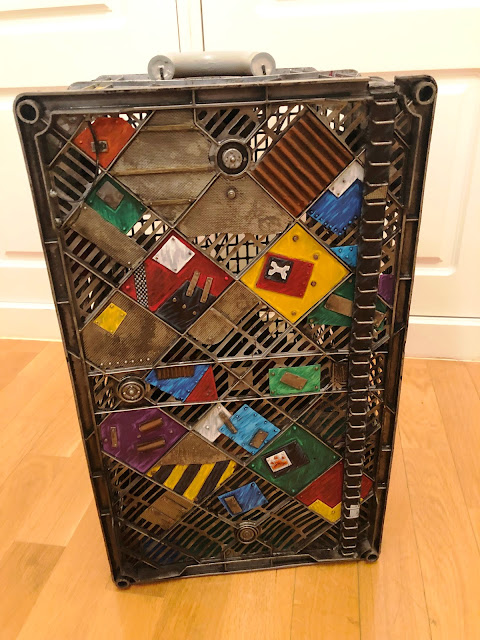 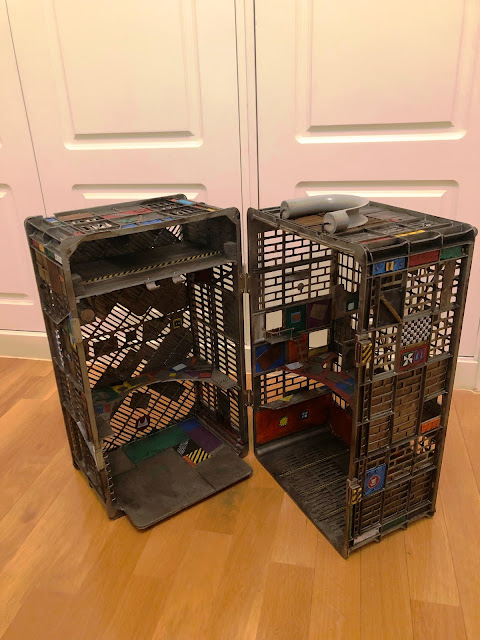 Some close-ups of a few details:

You can see I left the handle unpainted. Just a practical matter, as I would eventually end with all the paint on my hand!But I think it works in its original grey.

Now that we have the box, the final item to finish the project is the back banner. If you remember, my pal Rinahe had already made the relief, so it wasn't just a plain sheet of paper; it had all the items on it

The original source is of course this beauty of old: 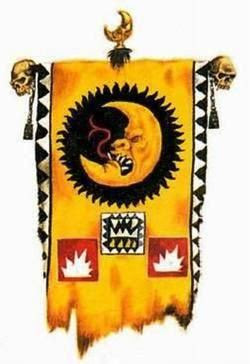 There was really no point in painting mine differently, so I simply used the same colours. Here you have this step by step:

I used watered down Contrast paint directly on the paper to represent the fabric of the banner. It's the same colour I used on the Gargant itself, so it all would look coherent:

Now I only had the face of the Bad Moon left:

Be ready to witness the glory of Mork. Ye all praise his Orkiness.

Behold, for this is Morkstroke, and he is the bearer of doom, altar of Mork, holy glory of his name:

Here you have it next to his home:

Storage is the main concern when you deal with such a beast, so the solution my pal Rinahe provided me is quite clever and solves most of the problems. Of course you still have to deal with room enough for two fruit boxes together! But it's quite easier than needing space for the Gargant totally assembled.

I'm most happy with Morkstroke, you can bet. It's been one of the largest projects I've faced so far and it's taken me roughly more than a year (with other projects involved, of course, but a year no matter what). I think I'm in dire need of some smaller projects just to breathe fresh air again. I have no idea of what will I paint next, but I guess I'll try some regular 28mm minis (I have plenty of those!).

I hope you've enjoyed the Gargant project as much as I have!