OK! We were coming from this post! About time I show some progress!

I left you with the front of the Gargant in its basic colours. Here you can see the same process on the back of the monster:

So once I had finished Stage 1 all over I begun to think about details. For example that bulge on the front. The Ork Boob. Now you can't unread it. Ork Boobs.

I highlighted the plates, rivets and flames and gave consistent colours to all the rest of the pieces. I'm assuming you can hardly tell from the pic below, so please take my word. I really did it

I added some small details here and there, but I didn't want to overdo it, I think it already has quite an amount of focal points to draw your attention.

OK, so what if we spend some time on da feet?

Same process than the rest of the body. Yellow primer, yellow Contrast, you know.

Painting these glyphs I'm becoming with a crazy idea. Well, even crazier than the regular stuff. I was thinking that it would be cool if colour had an actual impact on Ork language. Just the same that happens for example in Japanese, in which sometimes the same written word can have different meanings depending on the pronunciation. What if different colour combinations on the glyphs made different nuances on the meaning of the word?

Well, OK, whatever. Anyway, I painted these randomly, so I'm not giving it much more of a thought. Maybe next time.

Next step was the super delicate moment of weathering the whole thing. I was really sure that it needed something, but definitely not too much. It had to be bright. Yellow. Oldschool.

In the end I only used the old sponge trick and restrained myself, so the pieces still looked decent.

The same goes for the rest of the body. Dark brown with the sponge, mainly wherever I had previously screwed the paintjob in any way :D

I additionaly washed the rivets in brown and slightly weathered the pieces.

So this is it for now!


Progress on this beast is necessarily slow, as it takes a lot of hours on every tiny thing you decide to add, but I have to say I'm enjoying every minute spent on it.

I painted half a mini

Death Korps of Krieg is everyone's favourite. Period. They are kind of the absolute essence of WH40K. They have a tragic background, lots of suffering and attrition... yet they embrace the full cheesy grimdark vibe that made 40K what it is (or what it was), without falling in the excesses of modern editions. I mean, they don't have the kind of ridiculous bullshit background by Matt Ward, that kind of stuff so over the top that makes you laugh when it was supposed to be epic.

The Death Korps of Krieg are obviously ridiculous over the top, but not in the same way. They have that kind of tragic setting that embodies the Dark Millenium, but their whole spirit of sacrifice and abnegation take deep roots in the Rogue Trader times of exaggerated black humour about... well, about everything. I mean, do you remember that time when the enemy surrendered yet they kept on bombarding the rebel hive for five years, though there had not been traces of life after three years? Yup, that's Krieg. 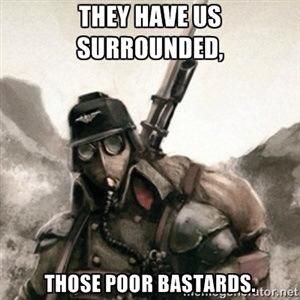 I'm digressing and I haven't even started. Let's talk about minis. I got this 3D printed Krieg bust thanks to a friend. It is glorious:

This was my first bust ever, so I was kind of scared of working at this unexplored scale. But hey, I got into Krieg mood... 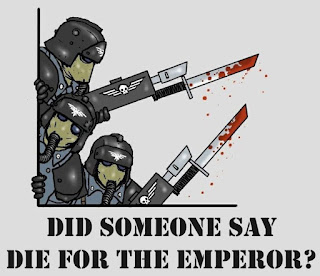 I had painted Krieg before, a commission for a friend. But that was long ago; in fact even before I started the blog, so I haven't ever shown them. Anyway, I fell in love with them and I've been toying with the idea of starting a force for myself since then.

Until that moment comes, I have eased my spirit with the bust. First thing was, obviously, base colours:

I know I should have started with the longcoat, but I painted leather straps instead. No explanation. The Emperor demanded. 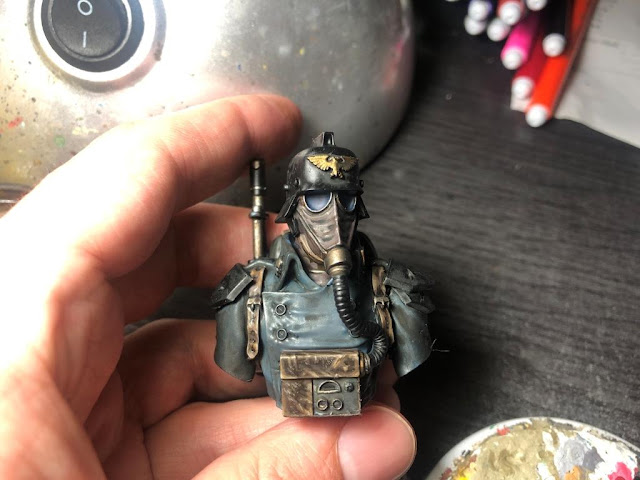 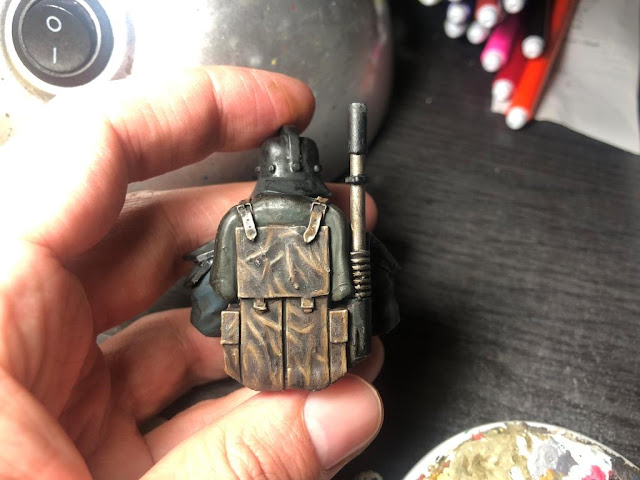 I wasn't sure of how to paint the numbers on the shoulderpad. Official sources depict only the Regiment number, and that was my final decision too, but I had some ideas of making my life more complicated, stating Regiment, Company and Platoon. You know, that stuff. In the end less is more.

I may look for a better base, but for now this one works: 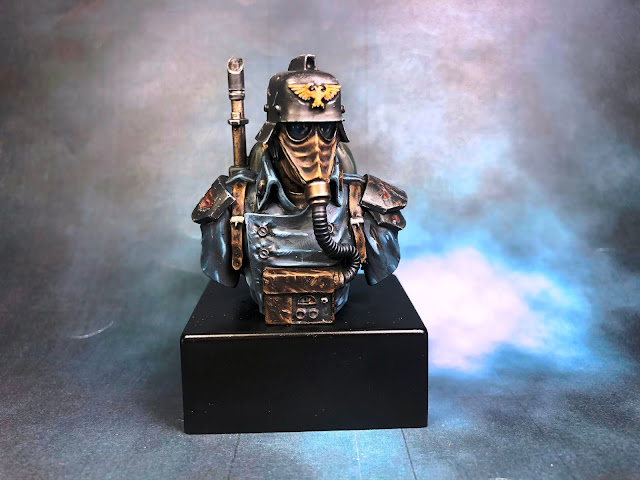 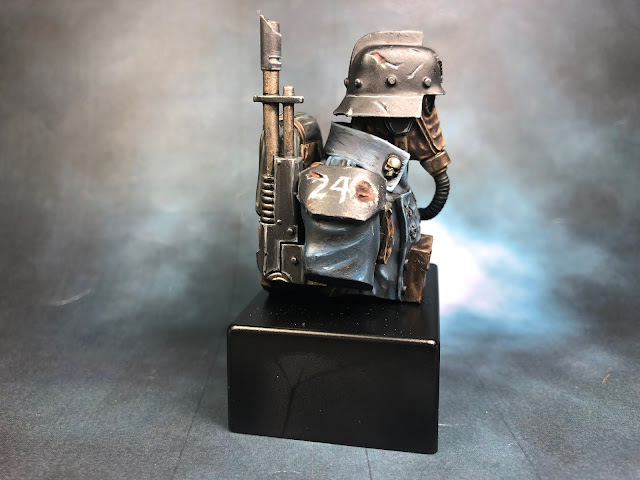 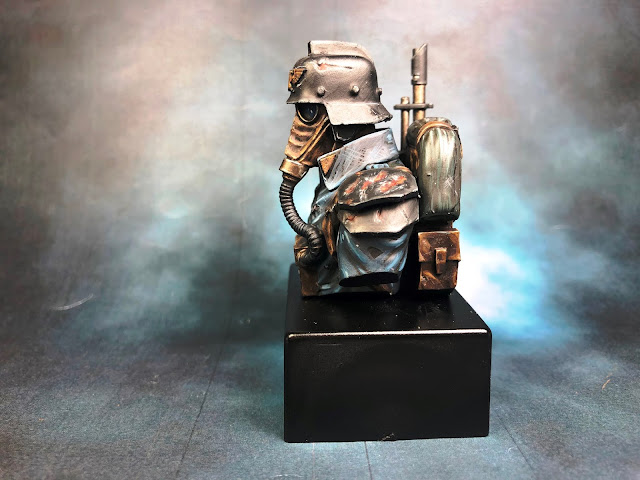 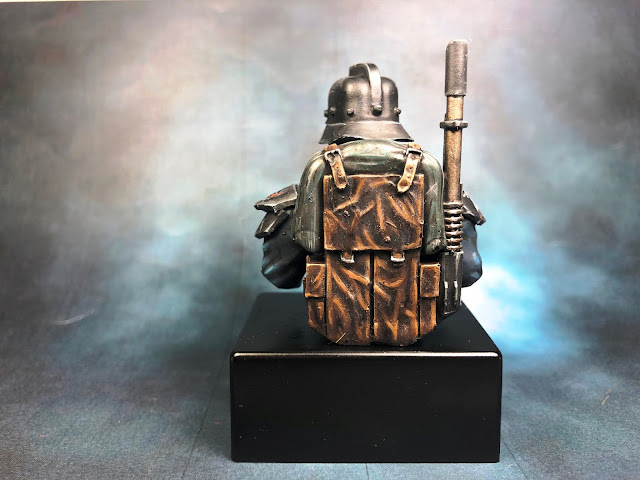 So what can I say? I finally put the kind of attention I should put on a 28mm mini! But on a bust! :D

I've found the experience interesting, I've enjoyed it a lot, especially considering this scale was a first time for me. Now I have to struggle with myself just to not immediately go to Forge World web and get a whole Krieg army. I mean, in these times of pandemics it doesn't hurt to have a nice, reliable mask, does it? 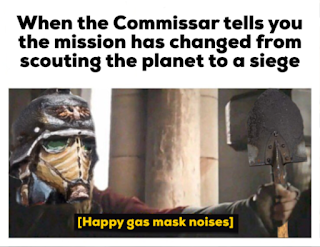