The rib bone is connected to the arm bone

If you haven't read the title singing, then the whole pun is lost ;)
I am (fully) aware that in recent times I have started several projects that demand my attention, like a Throne Room (and more) for my Genestealer Cult, a realscale Space Marines force for the Space Sharks and a Wasteland Walker. Oh, and many others that I cannot even recall right now, of course. Those are just the most recent.

But it is always a good moment for a short standalone new project! Yes, because this is me and that is how my mind works. Ahem.
The thing is that I rescued a bunch of minis that I got like... a year ago? Two, maybe? Shame on me, I know. It's this wonderful set of Pirate Skeletons by Via Ludibunda. I got them when they were released, it was love at first sight. I've finally painted them!

The release special offer included this pirate lady, who of course could only be painted in one fashion...

So here you have them all:

I considered painting them in darker tones and with a kind of desaturated palette, but on a second thought I wanted them to look fun and comical, all Monkey Island style.

I bought them in an impulse (as all my hobby related things), so I honestly have no idea what other ranges of pirate skeletons are out there (though I think I've seen some) and what ruleset could be fun and easy for small skirmishes. So I'll have to do some research :)

The only certainty I do have right now is that I need to find proper minis to convert and make a Guybrush and a LeChuck! :D
Posted by Suber at 25.3.18 12 comments:

Email ThisBlogThis!Share to TwitterShare to FacebookShare to Pinterest
Labels: Via Ludibunda

Just a quick side project that came to mind and I couldn't resist. I had a spare pair of legs from a Sentinel kit (as I had used the cockpit before on the mining laser drill). I thought it would be fun to build some kind of small walker.


So my idea is some kind of, I don't know, mecha-ostrich. Mecha-gallimimus. Mecha-something. I had this rider from who knows when and where. I only recall having the mini for years and years:

He of course had to look a little bit more mechanised...

I thought of putting a firearm on his hand, but the spear is just too evocative, it gives the rider that retro aspect he calls for. I put a tiny generator on the left elbow, the place for the shield. It is a field generator now.
What I hadn't considered is that I had to reposition the head, to make it look in the same direction than the mount. So, after 45 minutes of delicate cutter on the neck...

After some other details here and there, this is the final build: 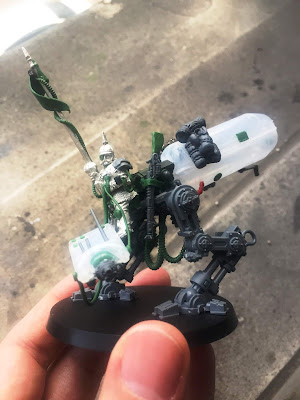 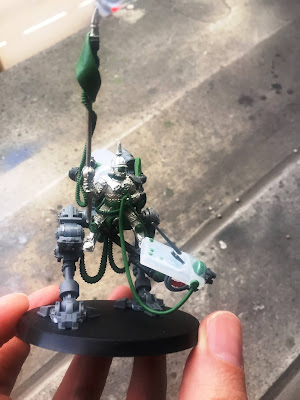 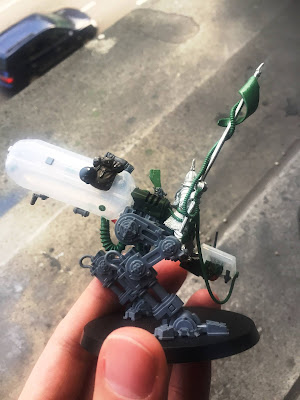 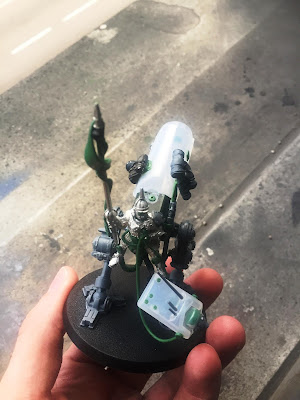 I still have nothing else beyond this point. I think he works as a wanderer through the ash wastes outside huge hive cities. A manhunter? (xenohunter, mutanthunter, you name it) A junk collector? A knight-errant in search of adventure? Hmmm, I'll think of a proper background for him.
My plan is participating in the Alien Wars event Apologist is running on his blog Death of a Rubricist. If you are not aware of the initiatie go have a look!

I hope I can spill some paint on this anytime soon!

PS: Of course that does not mean I have forgot about the Genestealer Patriarch throne. I'm on that too!
Posted by Suber at 19.3.18 32 comments:

When the new became old

Who could have imagined that there would be a day when making realscale Space Marines would be considered oldschool? Ha! But here I am, for the day has arrived!

With the new Primaris Space Marines out there in the market it would be rather silly converting old pieces to make realscale marines out of them... And that is exactly what I'm up to :D

Well, first of all, a little catch up, just in case you don't know what the hell I am talking about. In the early times of Rogue Trader, Space Marines were regular troopers, just with elite gear and training (oversimplified explanation). But with the upcoming of 2nd Edition, their background changed enormously and they became more powerful, genetically enhanced monk warriors, giants among regular men, blah blah (kind of oversimplified again).
Unfortunately, the rules never changed accordingly and, while they became true elite among the armies of the Warhammer 40,000 universe, they never reflected that demigod-like spirit the fluff talked about (of course, Games Workshop wanted to sell models; a five men army would not be quite a wise movement for that purpose). Nor the minis reflected that, Space Marines models being regular human sized. Meh.

I like the concept of giant ironclad warriors causing mayhem all over. In fact, if you browse through the blog, you'll see that my liking of the 'truescale' movement (i.e., converting minis so they matched the background) is not new at all. You can also see that my thoughts on this go through the 'movie marines' movement, i.e., giving them according rules and making real monsters out of them. You can have a look at the battle we run on my pal Keyan Sark's blog (Spanish only, but I trust you'll find many other stuff of your liking there).

In recent times GW have released the new Primaris range, with larger minis. Finally proper scaled Space Marines. I don't care much about the new fluff anymore, but I understand they are a new brand of marines blah blah whatever. For me they are just the Marines as they should have been since long time ago. I'll get some of them, sure, but... (guilty voice) I have amassed so many bits through the years in order to create realscale Space Marines that I have to put them into use!

So, honouring this blog's name, here you have an experiment for a proper oldschool realscale Space Marine (weeee!)

My starting point will be Marneus Calgar's terminator armour legs:

I made a couple of experiments for the torso. I tried to replicate what I had done years ago and use a regular torso enlarged with greenstuff. But it didn't work that fine on these legs. I finally used a Terminator armour torso:

I have made the decision to dismantle my Raptors army to build a realscale force. Let's face it, I have too many marines (imagine how many if even I can say that). I want to keep my RT Ultramarines army (proper Rogue Trader) and a realscale army. But I have no justification for an additional 'regular marines' army. It's been hard, but I made up my mind. No way back!

So, using the Raptors Command Squad bits, this was my general idea:


Now I had to pick an army. I discarded Ultramarines as I was keeping that army. I seriously considered to paint them as Raptors again, as I like the military looking. But I finally decided not to do so. I had already done that project, I had to move on and do something different.
After giving it some thoughts, I chose the Space Sharks. Or the Carcharodons, as they are officially known nowadays. The grey dominant colour was not too garish and, according to their official background, their aesthetics are of Maori inspiration, which definitely tipped the balance.

You can read Whetū on the greave. It's Maori for 'Star' (please, any Maori speaker correct me!). The front shield bears a Koru, a symbol of regeneration and new beginnings.

So this is how my new crazy project starts, a realscale Carcharodons army. I am aware that not all my fellow oldhammerers will like this, but I hope you will indulge my soft spot :D

I have some plans to give this Captain some companions. A few Primaris, right, but some other crazy ideas are lurking my mind like sharks. Like Space Sharks...
Posted by Suber at 14.3.18 21 comments:

Yet another installment on the Genestealer Cult, but quite a decisive one this time. After the laser drilling machine I thought I had enough strenght to get back to the Hybrids. I had the 1st and 2nd generation ones left, and just like it happened with the 3rd-4th generation ones, I have to conclude the minis are superb, beyond measure, but terribly mind-exhausting to paint in a row. However, I think it's the only way I could have ever finished them. And so I have done!

Best kit design ever. There are two different bodies and two different sets of arms. But they combine so perfectly each other that you can build these four gentlemen who look totally different. Right, check the photo. The sets of arms fit in both bodies to achieve complete different minis. Chapeau.

Now a couple of Purestrain Genestealers:

I have to confess I have some problems with 1st and 2nd generation Hybrids. First generation ones are supposed to resemble more the Purestrains, while second generation ones should have more human features. Sorry, pals, these all look the same to me. Three arms, jaws, big heads...

I may be skipping something obvious, but for the moment I'll just say this is the Generation X of the Cult. Hmm, some identity crisis...

But the important thing is that I can now take a family pic!

So this is the whole proj... Oh, no. No way. The sharpest among you may have noticed there is a very important mini missing in the photo. Right, the Patriarch...

But of course I already have a Patriarch from the Space Hulk game, I have no need for another one. Or do I? Well, given that I have a mini set for game, I believe I can dare to do something with the Patriach from the Overkill box.

What does any respectable Patriarch have? I don't know, let's browse some pics over the internet...

Oh, a throne! It would be great if I only had a thr... Oh, wait. I got that Hobbit starter set. I painted the Dwarves, and I also used the Goblins for another project... But the whole scenery is still in its sprues. So in fact...