I've fallen into Shadespire too

I'm afraid that's right. A friend got the game, we played it... and I liked it! Can you believe that? Yeah, I'm shocked too, but it happened.

Anyway, my pal commissioned me to convert & paint his minis. I've just finished the first warband, the Sigmarite whatevertheirnameis. The instructions I received were more or less to make them look like Knights of the White Wolf, but under this AoS prism. That's good, for I can still paint new AoS minis and present them on a oldschool blog :D

Well, let's get into bussiness. First thing I had to do was getting rid of all those lions and transform them into wolves.

Now for additional details. The shield. That large shield with a hammer. Nope. I had this banner in mind...

In the end this is what I got for the boss.

About the other two guys, I was certainly determined to not use the original masks, but bare heads. Wonderful Statuesque Miniatures provided me the solution I needed...

So this is the conversion work:

Now to the brushes! Knights of the White Wolf means metal and red...

Don't paint on the walls!

Back again to the Genestealer Cult and their underground complex. After a couple of rooms I thought I needed some corridors. So I made these with foamcore and Das clay:

I kept the idea of an old mine, or at least corridors excavated in the living rock. But I brought an idea I wasn't able to try on the breeding pits, I made some wall paintings. I explored the idea of some kind of ancient language, something past from generation to generation and that now has become part of the Cult legacy. Not pretty sure of where the inspiration came from, but I wanted it to look not-Latin alphabet, that's for sure.

Of course I painted them before assembling the whole thing. But when everything had dried and I tried to glue the other walls, I noticed the Das clay had cured and kind of shrinked, so I experienced some warp problems on those walls that were attached to the floor with the clay:


So I had to add some supplementary pieces to make it go back to verticality:


I should have measured better before. Don't get me wrong, I like the idea of the corridors looking narrow and suffocating, as any Space Hulk-like board should be, really claustrophobic. But gaming wise it's going to be... interesting. At least the Space Marine player will feel the anguish of narrow places, I guess!

Well, of course I'm going to need a ton of corridors, but these were the first experiment and I think they serve their purpose. I may make next slightly lower for gaming purposes, but I'm still undecided. For the moment I can say the Genestealer Cult has a place where to live in!
Posted by Suber at 25.7.18 17 comments:

Rebels with a cause (A WH40K2 Scenario) - The game

If you read the rules I posted a few days ago, then you know what all this nonsense is about. You are warned. Proceed under your responsibility. You are about to enter my realm of silliness and crazy games that go out of control before you even realize what's going on.

You should read the introduction in the previous post so you have a full perspective of what's going on here. Long story short, the Governor is stranded within the uneasy borders of the low Hive, his barge been taken down. He and his retinue must reach the closest safe point, an Arbites outpost just on the other side of the board. They better hurry before the angry mobs of desperate citizens decide that the Governor needs to be held accountable of his bad deeds and lynch him. Besides, the murmur of the shouting has reached the under-underhive. A mutiny is the best chance imaginable for the Genestealer Cult to make a raid and capture citizens to be infected. For sure no one will miss anyone in the middle of the upcoming battle... 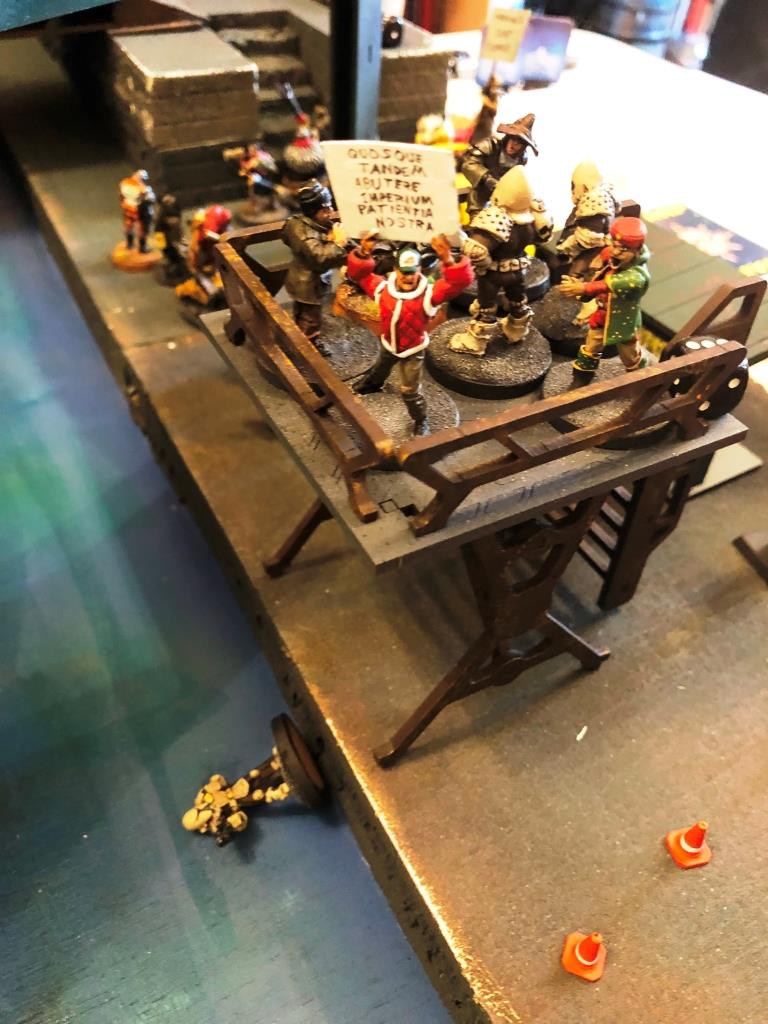 So the Governor's retinue will start on the right side of the pic, where you can see the barge. They must reach the Arbites outpost, that landing pad on the left of the pic. They will receive Arbites reinforcements, attending the disstress call. The protesters becoming rioters will be all over and a few Genestealer Hybrids will emerge from the docks when the time comes...


Things start to warm up when a bunch of freaks come close to the Governor and begin to shout and chant.


The Arbites come to the rescue! The first squad appears on one side, they come from downtown and were the closest patrol.


But... what in the name of the Holy Emperor are those? They come out from the docks...


In fact, the first thing they do is spotting the Governor's retinue...


Oh, more problems. In that elevated monorail there are some protesters, who carelessly action the emergency breaks.


The protesters in the monorail decide to get out and take their action to another level:

The Escalation of Violence Levels proved to be terrible for the rioter player, as he insisted of failing every single break roll he had to do. Seriously.

So the Governor barely manages to escape, but only to find...

After taking the dead minis apart, here you have a general view of what happened so far. The Governor is halfway, on the center of the board. Protesters and Arbites are struggling just north of them, a few steps away. But the way to the Outpost is blocked by the Genestealer Cult. There's still a lot of game ahead!

Well. Then it happened. These civilians came up where the Ornithopter was:

You see what's happening? My pal rolled the scatter dice and bam! Right on the Governor's head.

Suddenly... a presence, a subtle presence that had not been noticed before revealed itself. Alien in its nature, from beyond the stars. Greedy, ancient, unaware and careless of the desires and the goals of humans and Genestealers, of rich and poor, ïa, ïa ehrm... I mean...


Yup, consult your Rogue Trader manual if you please. Consult this very blog to know more about it. I had this long time debt and finally managed to pay my dues. The creature deserved a role in a scenario. Well, that explains many things, such as the rebellion itself. Or would you expect honourable citizens to revolt against their legitimate and benevolent rulers? No way, it must be a xenos complot! :D
I just took the profile from the RT book and adapted to 2nd Ed. standards. I, as the GM, would be taking control of it, and would mess with all the players at the same time. It was just a way of adding a little more mayhem (but my idea was also trying to balance things if one of the players was doing it way better than the others).

The Governor has a displacement field (a tiny Warp reactor that literally moves him a few meters away to prevent hits). So every time he receives a hit, there's a chance that the guy ends up somewhere else. Oh, the laughter! Imagine a Warp portal constantly opening and closing avoiding the Governor to receive any harm. Totally worth of a movie.

In the meantime, the captured mining drill had been shooting the laser cutter at the Arbites six-wheeler with most disappointing results. Apparently you need to go through some kind of learning if you want to handle industrial heavy machinery, who could have guessed. So then the civilians decided to take a new approach...


I have to say that by that moment it was way past 1:30 AM, the wife and the Suberling were long time gone to bed... and here we were yet, hushing and rolling dice carefully. My fellow players took a decision that honoured them; they decided just to play the Governor's run and forget about the other accessory side stories. The man had just one final setback. He had to go under the monorail, where a group of protesters was waiting and throwing stones and stuff. If he could go through that, we could consider him saved. So he ran and ran (as fast as his belly and short legs allowed him to do so). Some stones hit the ground next to him. But finally...


This time not even the displacement field was able to save him. The protest had become a riot, the riot a rebellion, and the rebellion an uprising!

The rioters had achieved victory! If victory was a word that could apply to this situation. Trust my word: an Imperial Governor attacked and lynched, a heretic Cult seen, a xenos criature roaming freely in the neighbourhood... Oh, brother, I can tell you one thing for sure; next Imperial force knocking at your door is not going to be a mere Arbites patrol...


Phew, what a game! You can see that anything could have happened during the whole battle. The Genestealer Cult had some serious chances of infecting the Governor (and in doing so, getting access to the whole Imperial chain of command!). The Magus psi powers were dreadful, and really got a notorious influence in the game (that's why I decided the Enslaver to get control over the Hybrids, to make things more even).

The rioters rules (the activation levels and so) were a fun thing to do, but now with this experience I think I would change some things, specially the deployment rules. A series of really bad rolls made a lot of groups to dissolve almost as fast as they appeared on the board. My mate played the protesters way more aggressively than I expected, so in the end the activation levels stuff was almost a matter of limiting the use of force he was prone to use. It's a pity we didn't get to use some rules, like the Arbites trying to calm the mob down. I would have loved to see some more interaction between law enforcement agents and rioters, the spirits going up and down. But it was fun the way it all happened!

The Governor's retinue behaved as I had expected, but their survival was far shorter than I predicted. The escape being sort of the McGuffin in the story, it worked as the conducting thread all over the game. It was completely fun.

On the whole I can say I enjoyed it a lot. It's been enormously rewarding to see the story unfolding on the board and the players really getting involved in their roles. The board served its purpose. As you can see, it's official, I've reached its saturation point, I cannot deploy another single building on it, and that's the exact goal I have pursued all this time.

So I declare myself satisfied. Everything has been worth of the time devoted to the project. The game was utterly fantastic for me and I hope the players enjoyed it as well. Now I can move on (Right, you know I already have more boards and games in mind!!)