Know, oh prince, that between the years when the oceans drank Atlantis and the gleaming cities, and the years of the rise of the Sons of Aryas...

...there was a kickstarter full of all the minis one could imagine, and even some more undreamed of, which was supposed to cover every possible Cimmerian adventure, and because of that it was delayed, and delayed, and then delayed again. Hither came the board game, with all kind of details and ups and downs and all things kickstarter has taught us to fear. So then, like two (or three?) years after the estimated arrival date, I didn't even remember what was my pledge or why had I dared to tread the dangerous steps of kickstarter with my sandalled feet.

Well, I guess you guessed, I was a backer of the Monolith Conan Board Game Kickstarter. When it was released I got super excited about the whole thing and I threw all my money to my screen. I'm not sure about the dates, but it was more or less at the same time than the Aliens vs Predator Kickstarter by Prodos, some moment along 2015, I believe. Wow, what a crazy year, I can tell now. I got into both KS and both were disastrous (OK, the AvP was much worse, of course), at least in terms of waiting for the product to arrive. Thinking of it I realise that even the Suberling Prime wasn't even born by then -well, that explains why I was bold enough to get into a couple of KS such like these! They have definitely been the last KS this size I have backed. Lesson learned.

I won't speak of the AvP KS today (that will eventually come), but when this Conan KS arrived I was suddenly terrified. It was the King Pledge and a tiny add-on, which made barely below 5 Kg (about 11 pounds) of plastic and cardboard. Where, oh where was I supposed to storage those two huge boxes.

I finally found the strenght of will to paint it. Why, you wouldn't expect me to play it unpainted, would you? Conan may be a Barbarian, but I'm defintely not.

BEWARE: There are a lot of pics ahead. I mean a lot. I usually don't like to split projects through the blog, though it's inevitable and I do it all the time. But just for once I decided to keep everything at bay and release all the pics at the end, so I can show the whole project.

Just to get an idea of what I mean, here you have a shot of the whole set:

Well, seeing them all together now is a little bit shocking. Did I really paint all that?

Before the close-ups, let me say a word about the models. They are all great. Finely sculpted and casted, though you can certainly tell there are different sculptors involved, which is no surprise, given that Modiphius Entertainment had to offer continuous updates as stretch goals and add-ons during the kickstarter campaign; there was no way a single designer/sculptor could handle all that.

As far as I can tell, all the concept art comes from most talented Adrian Smith and Georges Clarenko, which of course is great. The thing is that they made an awesome work, as expected, but in fact it sometimes was... too original, if you know what you mean. It was Adrian Smith's (or Clarenko's) view of Conan's world, and that made some designs (and some models) different from the aesthetics I was more used to through the years.

I mean, the whole set looks coherent, which is obviously the most important thing. But there are so many things in here that at some point I was like 'Oh, nice, let's paint this Bêlit. Cool, let's paint the fifth iteration of Conan with different clothes. Hmm, these skellies are really something. Uhh, who was this guy again? And this other one? Why are these two ladies essentially identical, are they the same character?'

You see, there was a moment in which I didn't know what I was really painting anymore, and that eventually became an issue for me. I don't know, maybe in the end I was not as such a big fan of Conan as I thought I was, but it sometimes was a little bummer to think I was painting an unknown character from a short story I read long time ago and I wasn't able to recognise just for the artwork or the miniature.

Anyway, I believe you came here to see the pics. Let's go for them!

The minis appear in no particular order, mostly as they came in the boxes. Maybe I should have grouped them together by novels/stories (in fact that would have made sense!) but I was a little bit overwhelmed taking care of where to pack each mini back in their correct spot on the tray!

Anyway, here you have them:

Just a word about this last one, Othryades. It's not purely a character from the Conan universe, but apparently a promotional mini exclusively provided with the Kickstarter campaign to promote the Mythic Battles Pantheon KS by the same company, Monolith. This is the best example of what I said earlier. When I received this mini, about three years after the KS campaign ended, I didn't even remember it as any stretch goal or whatever, and neither could I identify who this obvious Spartan was or where he fitted in the Hyborean Age. But at that moment that was kind of my general feeling about this whole game!

Whatever. Let's go on. More pics.

Fun fact: The Kothian archer was first designed to depict Balthus, but later on this new design was approved and the mini apparently was demoted to a generic archer

(That's right, this KS got so insane we even got a mini of a wild dog appearing in a Conan story. No further questions, your Honor)

As far as my research dared to go, Skuthus is a necromancer that allegedly appeared in the first draft of The Hour of the Dragon. A draft! We have a character from a draft of a novel! Sigh


EXTRA BONUS: Besides the whole King Pledge, I also got this extra box, the "Brom Box", with alternate Conan and Bêlit minis, designed by Brom in quite a Frazetta style.

This is all, I promise!

Finally, I'm showing these last pics more as a resource than anything else. They are a reminder of where does each mini fit into the tray: 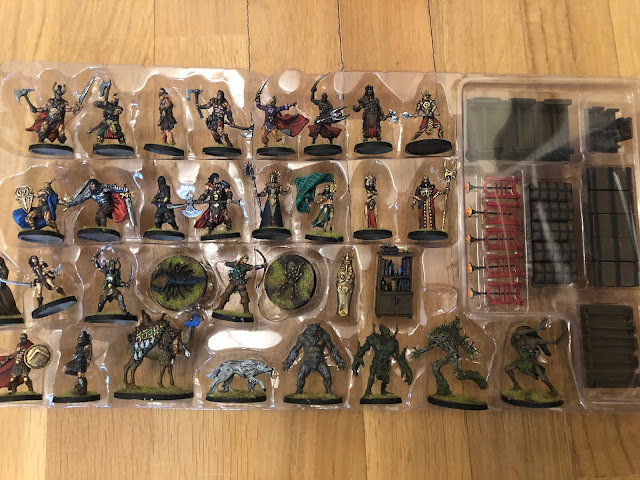 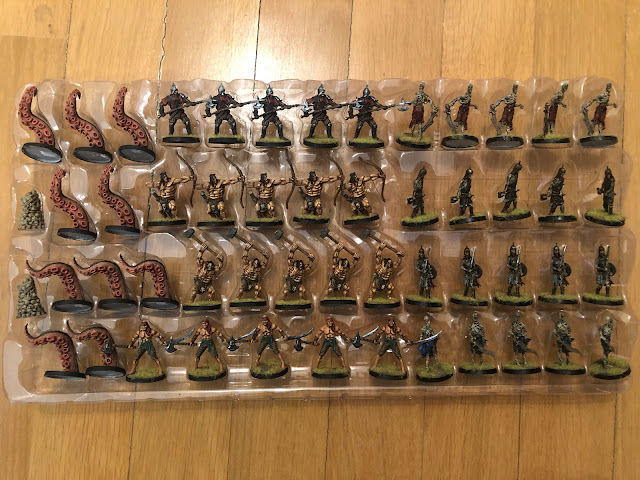 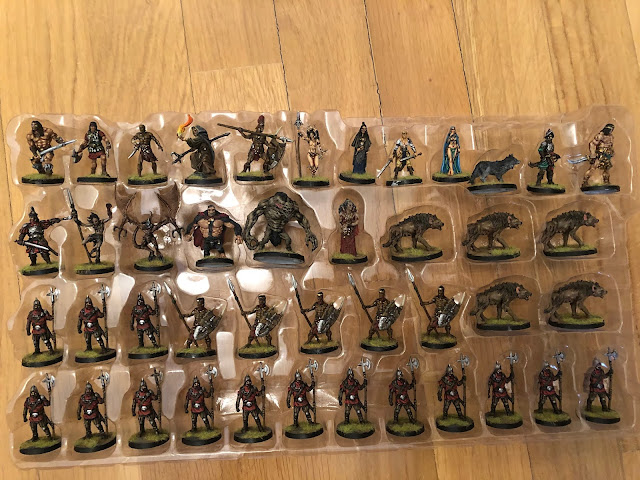 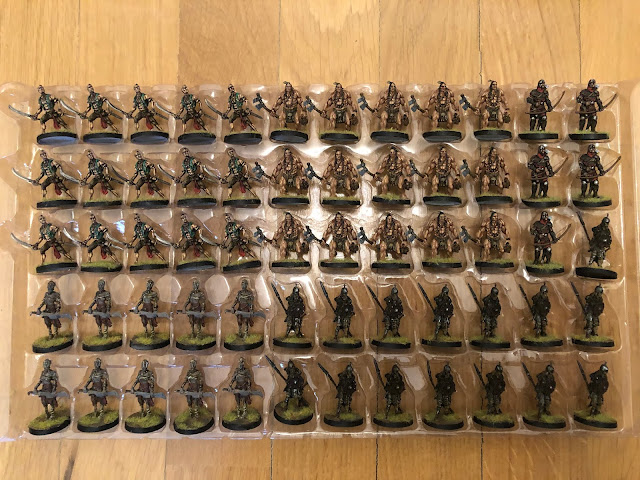 Well, can't believe you made it! You got to the end of the post, congratulations! Crom strong on his mountain smiles.
What can I say, this has been quite an endeavour. A high adventure, if I may say so. This partly explains the slow path of updates during the last... year, maybe? I know, I could have made quite a number of separate posts (maybe I should have done that!) but I have to say it's quite a satisfying feeling to release all this content at once, it gives me a particular sense of closure. So be it!
Oh, but believe me or not, I'm not done with Conan yet. I still have minis belonging to a totally different project, nothing to do with this Modiphius game. I don't know when I'll be able to paint them, but whenever it comes... this story shall also be told.
Posted by Suber at 23.3.21 26 comments:

Email ThisBlogThis!Share to TwitterShare to FacebookShare to Pinterest
Labels: Conan the Barbarian

OK, it is time this lil' boy gets some colour!

First thing was properly priming it. I simply primed it white and then black on certain areas

Then I used a yellow primer. A couple of layers all over, even on the back banner.

Well, now that the easy, quick job is done, I'll have to bite this project little by little (though I don't really think little can ever be used in this context...)

First thing I'm doing is the body. Being the largest part, it's going to be the hardest -I believe. But I guess once it's done, the rest will look more feasible (I don't dare to ever say 'easy'!).

So I painted the basic colours. Some plates will be red, green or whatever. At this stage I didn't care if colours looked plain, I was just seeing the overall look, before weathering or any other effect. Pretty simple process, so I didn't take WIP pics. The only 'advanced' thing I did was the black flames:

But now I needed to do something to that plain, dull yellow. My first idea was to use Agrax, but I realised it's too dark and too brown. It was going to dirty up the thing and it was going to be an awful mess. Then I had a sudden idea.

What if I used the GW yellow Contrast as an ink?

-But Suber, you can't paint a 28mm scale Gargant with Contrast.

The Iyanden yellow Contrast leaves this orange aspect that totally suits this kind of crazy idea. So I used the Contrast as an ink on all the rivets as well as on the lower half of every yellow panel. This was the result:

Now I have to repeat this treatment with all the other colours. I guess I will use Agrax for red and some other brown tone for green. Then we'll talk about highlighting and so. But this is it for today!

This project is undoubtedly going to take some time. Though it is inevitable to part it into smaller stages, I'll try not to make too many posts. Be patient and ye shall be rewarded!