First of all, I'm talking about this, not the GW one: 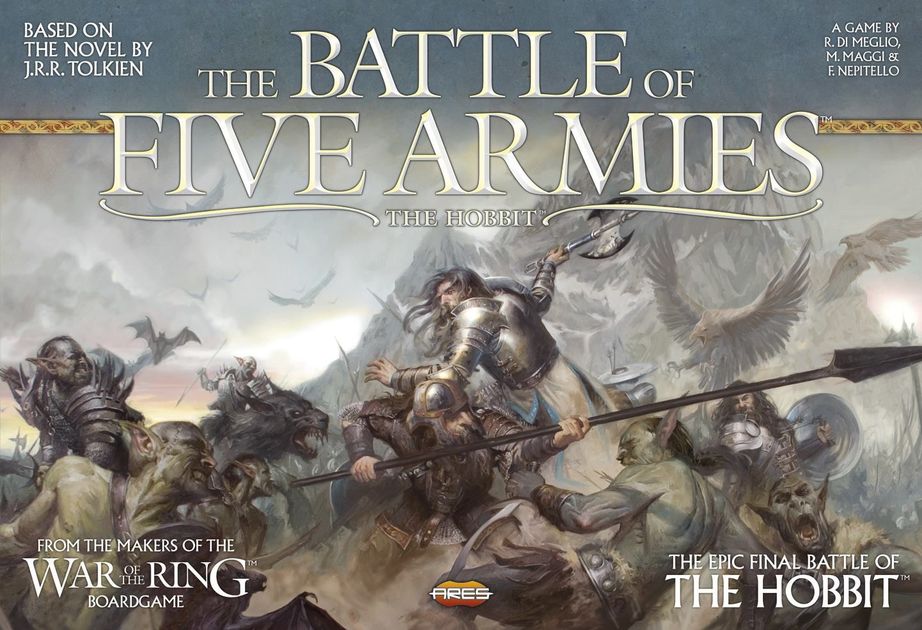 If you look back on this blog, you may see that I'm not scared of losing sanity points painting these games. I already did that with the War of the Ring boardgame (Pt.1 and Pt. 2, and even played it!) So, what are a few hundreds of minis, what do they mean to me? Nothing! Nothing, I say!

OK. So during these last weeks I've been slowly painting both armies, unit by unit. The minis are essentially the same that the War of the Ring ones, so I was familiar with them (extra loss of sanity points though, as this project was about painting the same minis again!). This time I started with the Armies of Darkness:


Now to the Free Peoples:

Phew! I'm hoping to show good pics of them on the board anytime soon! They certainly have deserved that (you wouldn't expect me to play with unpainted minis if it was in my power to avoid that, right?)

Email ThisBlogThis!Share to TwitterShare to FacebookShare to Pinterest
Labels: Boardgames, Lord of the Rings

Another scenery project today. Quite a totally different one! Back to the Shadespire project for a while. One thing I knew for sure since the very beginning; I didn't want to play on plain cardboard, I wanted a full three-dimensional board.
My most obvious and closest reference was my pal Hetairoi. Go check the link, seriously. That board is [censored] awesome. You can even get a glimpse of the WIP here. You know what? Check the whole blog, you won't be dissappointed, trust me.
I knew I simply couldn't beat that kind of board, so I didn't even try. I didn't want to replicate the illustrations on the card boards, I chose to make my very own and personal design and make a more generic landscape, if you prefer to call it that way. I tried to represent an old, abandoned town, decrepit and ruined. My inspiration came from imagining an ancient place fallen into oblivion, kind of Osgiliath during the War of the Ring. It suited (slightly at least) the Shadespire theme and allowed me some creativity. In fact the only thing I had to take care of were the blocked tiles and the starting tiles.

So first question. How could this be achieved? I could have taken Heitairoi's approach, but... the guys at Collateral Studio had solved my problem in advance :)

Well. Four boards then. I started with an easy one, just for a test. A clear board with no obstacles whatsoever. So I used DAS clay putty and a textured rolling pin from Greenstuff World:

I didn't try to achieve a perfect cobblestone pavement, perfectly regular everywhere. On the contrary, my attempt was to get an old touch, with the cobblestone going up and down, with irregular shapes, puddles, earth, rubble... whatever.

Then I faced a conundrum. How was I supposed to mark the starting tiles? Should I paint a sign on them? Unlikely, it woldn't be seen. Hmmmm. An then a light bulb came on over my head (a LED one, of course, EU regulations). I recalled I had these markers from the Relic Knights game:

So how about using them as warpstone? Well, OK, that would feel more Mordheim than Shadespire, but not that out of place. So warpstone it is:

Let's pour some paint on this!

Could it be better? Sure. Could I have spent more time defining the tiles and making it all more regular? Of course. But is this enough so I can play on that? Oh, most definitely yes.

Let's face the second board then. The one with three blocked tiles:

This time I tried to give this board some sense. Buildings forming a street or something like that, not pure randomness. I had some concerns about the ruins. Only the L shaped wall blocks tiles. If lyou look closely, all the other pillars and stuff involve doors and are place on the corners of the tiles. I'll add more rubble on the blocked tiles later, so I make it clear on which ones you cannot stand the minis. Blocked tiles being the exception and not the rule, I hope I can make it visually clear. The rule will be 'can you stand the mini on here? Then it's a clear tile, you are good to go'

Third board. I tried something different here. GreenStuff World also sell these plates:

I was told that I wouldn't be able to cut those resin pieces into hexes, that I would break them, that they weren't designed for that... 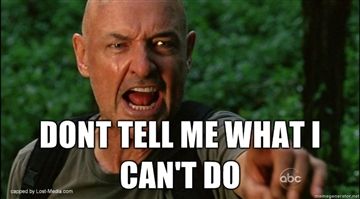 This is another clear board:


Fourth board. Three blocked tiles, a single one and two in a row.


I realised I had made a mistake. The blocked tiles not only were supposed to not allow the minis stand over them, but they also block the line of sight. I had to make it visually clear.


Now we have four basic boards. But I couldn't leave them that way, of course...


So with some more tufts and stuff, these are the final results. Here you have to pics of each board, from both sides: 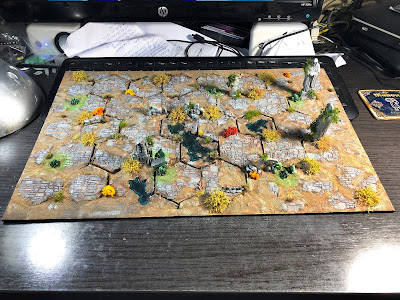 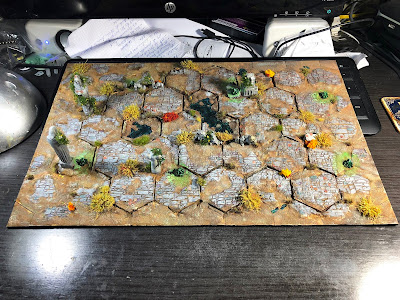 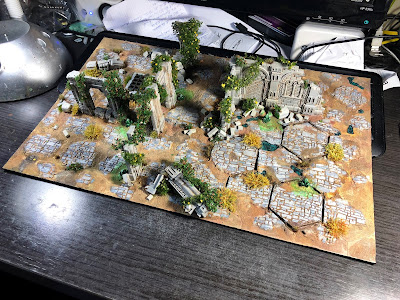 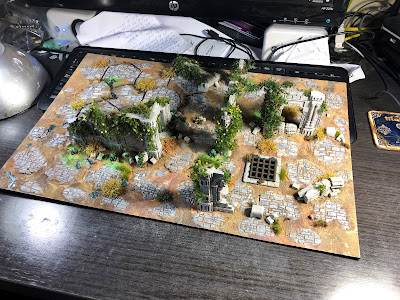 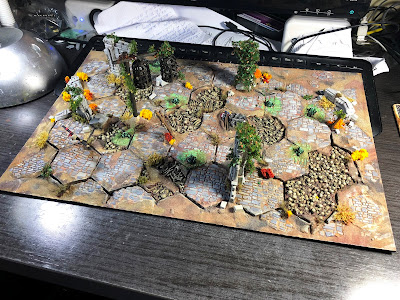 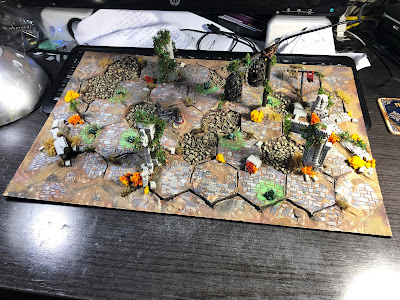 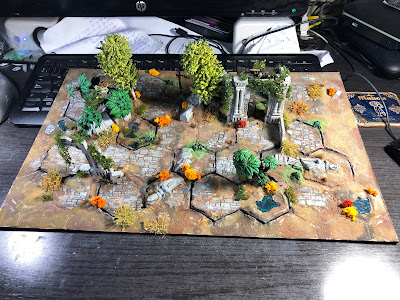 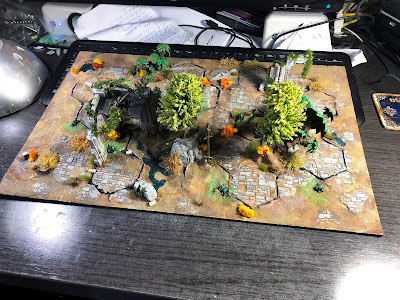 With some minis on the board: 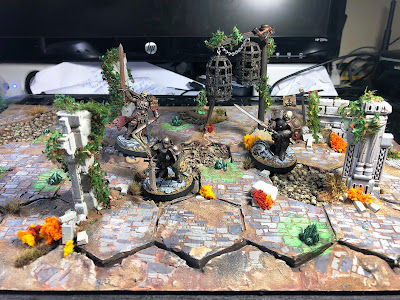 BONUS: The game also needs objective markers. I made my own, in the same fashion that the boards. I will be needing five for now, as you only need more for three players games (unlikely for the moment). 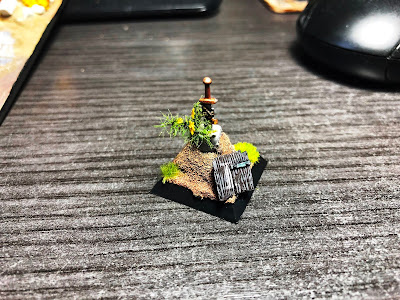 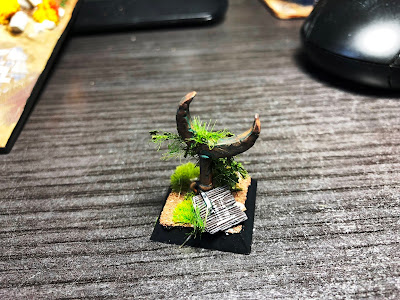 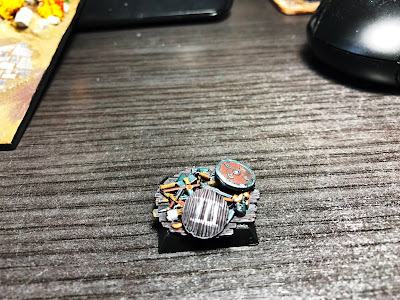 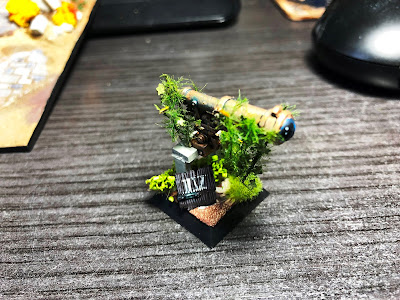 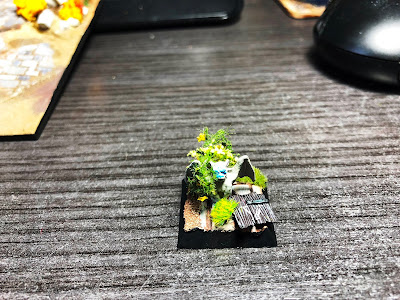 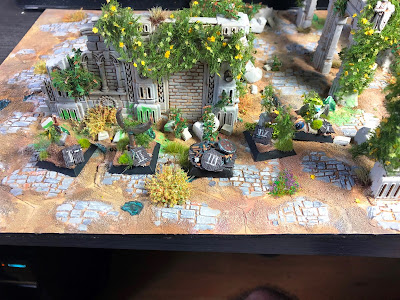 But what do these boards look like when together?

This is it!
On a perspective, it hasn't been that expensive (at least in relative terms, as everything in this hobby) and just the mere fact of building the boards has been enormously rewarding. The most serious disadvantage of this crazyness is that... Now I want to build full, huge wargaming boards this way!!!
Ahem. Well, for now I only need to convert and play the other band and get some gaming experience...
Posted by Suber at 11.10.18 24 comments: