Hello everybody!! Merry Christmas to all!! (slightly out of time, I know, I know, but these days are being really, really busy!). Anyway, while trying to survive holidays, I'm also making my best to paint something!

Not sure if this is gonna be my last entry of the year (I have some other stuff almost finished, but not sure if I'll manage to finish it, take pics and blog it!), but just in case, I'd like to thank you all for being there and, of course, wish you all the best for 2016!!

But I guess you came here looking for minis! So minis it is. Well, just a single mini, but one that gives me some closure, as it's the last I needed to finish a squad. For some time I had been looking for this particular Terminator:

One of the weirdest models of all times, hehe. If you look back into the history of the blog, you'll see I had a few more Termies of old (If you are too lazy for that, you can find them among other models here or here, for example, including the epic wrecking ball terminator).

I had the idea of sticking a banner pole to the Sergeant. I even came with this design for the banner:

But the Mk.I lacks an easy grip for the pole I needed, so for the moment it will stay without banner. Anyway, I will add another squad to my army using the oldschool metal Termies, so maybe I'll have another chance of using it.

Slow progress this week, real life and stuff, you know. Buuut how could I make it up for that? Bringing some colourful fish!

These are part of the Space Riders KS too. If you remember, I had already painted a couple of Pisceans by Diego. These two granted me the chance of having a squad. My inspiration was clear, I had already begun the Nemo path... :D


So you can see where my plan leads to, hehehe. With time I hope I can get models for all the fish tank. Besides, I took part in the DieHard Miniatures KS; I chose the Eru-Kin faction; I think they fit properly with this aesthetics, so in the end I think this could be a nice, different warband ;)

But for the moment this is it. Now for more!

Zo zis is a Zoat

Keeping on my Space Riders set, next goodie is going to be the Zoat. No big mistery, a huge centaur-like reptilian beast, another relatively easy mini to paint.

The ephemeral fluff on Zoats wasn't that much complete, though most definitely interesting. Just wandering reptilian members of a enslaved race, servants to the Tyranids and able to conduct some kind of diplomacy with other races in order to determine how they could be better assimilated to the hive mind. Without the Tyranid mind control they are supposed to be skilled psychics and capable of individual thought.

It's a pity that the Tyranids background evolved towards other direction, this was quite an interesting approach. I guess that modern gamers could use just the same way of thought but replacing Tyranids with Tau, that would make sense, I think.

Anyway! Reptilian centauroid. Well... All the Zoats I've ever seen were painted either in painfully bright green either in dragon-like red. I thought I could try a different palette...

I went on earthy colours again, just as I did with the Ambull. This time I was thinking more of rhinoceros or crocodiles, that kind of stuff. My first intention was painting the chest and fleshy parts much brighter, in greys scaling up to almost white. But I changed my mind as I realized I wanted the breather, armour and weapon to be cream/white.

Little else to say. Energy was meant to be blue and the rest was just a matter of shades and highlights.

I managed to play an Epic Game. Horaay! I still have my tanks half painted, but my pal KeyanSark offered me the chance to play and, due to our respective schedules, last monday was our only common window of opportunity. So let it happen!

We played NetEpic, a version of the game I am not familiar with, but Keyan is. I used my Ultramarines and a couple of Titans and Keyan used his recently painted Squats.

Each turn you roll for the initiative. Each detachment receives an order (first shoot, advance or charge), which is represented by a token, kept secret until you activate the unit. Activation is alternate, so the game is quite fluid; seriously, an IGOUGO system would totally kill a game like this. This is all about adapting youself to the adversary as they move their troops.

Keyan's giant cannon shot over me with some pretty devastating effects...

Turn 2 would be quite decisive, as we were going to fight for the center of the board.

Now for the good stuff... Titans!

My Reaver got an impact on the head and another one on the hip. Fortunately the tech support guys would manage later on to repair both locations and recover all the shields.

The Colossus, the Gyrocopter and the Warlord all opened fire against my infantry...


Keyan's Reaver managed to destroy my right arm (well, the Reaver's right arm!), so no close combat weapon. I managed to repair the rest of the damage inflicted and recover most of my shields.

So Keyan was decimating my ranks! However, at the moment we kept the same number of objetives. Turn 3 would be the decisive one then!!

On my right flank, Squat bikes had surrounded my only Rhino left. All was lost. All? No! Then we heard a 'Vooooosh' 'Vroooom' 'Hshhhhh' Reinforcements had arrived!

Keyan just shot me with anything he had. My Titan finally fell down when the reactor core was damaged beyond any reparation (at the end of the turn I made the required roll and at least it didn't explode causing more mayhem!)
Well, it looks like the battle was pretty much decided. Anyway, this was so much fun! 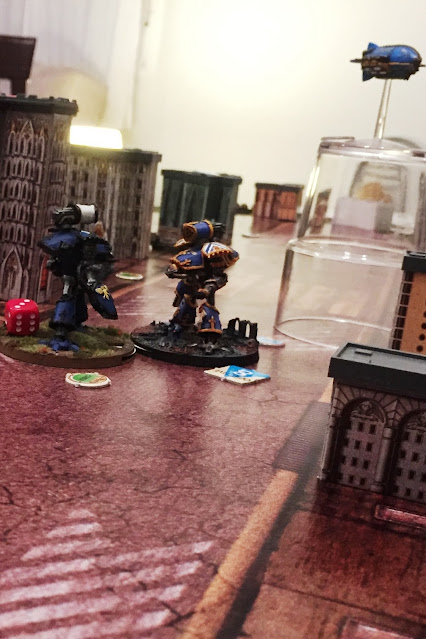 We were just for the final combats...o

So three turns and this was how it looked like in the end!

Well, so this is it. Victory for the Squats! Quite an enjoyable game, I must say, even if Keyan totally overwhelmed me in the end. As you can see, my approach here was totally wrong, I played WH40K instead of Epic, and that lead my troops to the disaster. I guess I played it like an Ork, haha, charging and facing such an artillery oriented adversary. But hey, this was my first game of Epic since... 2000? 2001? And that was with another ruleset, so this actually was my first game.

My main lesson learned is that this is not WH40K; not only about gaming, but about painting and organizing my forces. I had two Codex Astartes Companies and that doesn't work for Epic. Well, if you think that the game was conceived for the Horus Heresy, i.e., not for Chapters, but Legions with such a different organization, that makes much more sense. So I have to repaint some of my infantry to adapt my army to the game. I'm still painting my tanks, so this game helps me to know how to paint them too! (Yes, I'm ashamed of having played with half-painted minis, my bad...)

I'm really excited about games this size, specially after so much time having not played the scale. I'll show you my Space Marines army when finished and then I'll put my hands on my other armies. Hopefully I'll manage to grab some more battles!!
Posted by Suber at 10.12.15 26 comments: