I didn't play the original videogame, but I've been told this is exactly that very game, taken to the board.
Predictable thing, one player will be the Empire, crushing planets under an relentless boot, the other will be the Rebellion, acting in the shadows and waiting for the chance to strike.

I'll play the Rebels and my pal will be the Empire (again!). The Empire deploys its forces in a number of planets. The rebels have a few planets openly against the Empire, where they can deploy some forces, but their main HQ will be kept hidden. So I had some people at Mon Calamari, Bothawui and Ryloth, and I kept my hidden base at Dagobah (shhhh). At the end of each turn, the Imperial player will pick cards from a deck, showing different planets. From that, he will have to infere which planet is missing from the deck and guess where the Rebel Base is. Well, that or militarily conquer every place in the galaxy, in the hope that he'll find the base that way.


The rebels will have to accomplish some missions in order to gain support througout the galaxy, so the more planets join the Rebellion, the better, of course. The mission cards also include controlling whole regions of space, winning strikes on Imperial facilities and so. The Empire... well, the Empire just hsa to crush the Rebellion, what did you expect.
Both sides have a number of charming leaders. Each turn you may allocate one or more of them to a specific task (taking advantage of their respective skills in diplomacy, war, etc) or keep them to counteract an enemy action conducted by a leader. Besides, you can use them to move your forces from a star system to another.
Example:

Saleucami is under military occupation, but is not completely loyal to the Empire. The rebels try to Forge an Alliance. That's a diplomatic mission, so Mon Mothma will undertake it. If the Rebels succeed, Saleucami will give one loyalty point to that side (hopefully expelling the invaders!). But evil Emperor Palpatine himself opposes. Each leader has three diplomacy points, so each one will roll three dice.

For this roll the colour of the dice is irrelevant. Each 'hit' (the tiny explosion in the visor) means a success, as well as the critical hit (the big explosion on the red die). The crossed lightsabers (on the Imperial die) just allows the player to use special event cards to reinforce the action (not used here).
So the player who runs the action needs to get more 'hits' than the opponent. This means that the Rebel attempt fails.


This is more or less the regular course of the game. If no enemy leader opposes, the action automatically succeeds:


Some planets have different production points. They allow the player who controls them to send different kind of units to the production queue. Small units are easier (quicker) to get.

OK, let's get some combat. The Empire attacks Bothawui, Soontir Fel heading the incursion. Admiral Ackbar opposes and prevents the Empire from using tactics cards in the first combat round.


Combats are easy going. Each ship rolls attack/defence dice as told in the reference card. The more hits, the better, once again. The same when defending, each 'hit' avoids one damage point. The crossed lightsabers allow the use of those tactic cards for special effects.

So well, this is it. A game of interplanetary strategy:

Then the Empire gave it all and...

The Empire moves its troops onto Dagobah, not knowing that the secret Rebel base lies in its surface, but then it is discovered!

Ooook. The Rebellion is mercilessly crushed, annihilated and sent to oblivion. The empire rules!

The game is enormously fun, very strategic. You have to balance your options every turn and think what your opponent's gonna do. The two gaming styles are pretty different and that's cool, as shows the ways each one has to deal with the situation. For my absolute defeat I can find a number of reasons. First of all, the most obvious, not knowing how to play and learning on the go. I made some shitty decisions (e.g., placing the rebel base so close to Imperial controlled systems! And not moving it fearing to disclose its position!). Besides, I believe I was not that lucky with the mission cards. The ones I got were really hard to accomplish with the disposition of forces I had deployed. Finally, the decisive point, I played way too conservative, as in a regular conflict. The rebel player needs to be more daring, constantly on the move, striking and falling back. That was my fault, I was playing the way the Empire can afford, but not the Rebellion.
Anyway, a game that needs to be revisited! The failures of the past are the learnings of the future! In the meantime, I strongly recommend the game!
Posted by Suber at 29.9.16 12 comments:

Muties! (Pt. 5, some progress on the animals)

Back to the mutants again. I already showed what was I doing to provide the tribe with some riding beasts. Well, I have some progress on the subject. The big fella is now finished:

You can see I added some more stuff, but didn't want to overdo it, so no more baggage. Less is more. However, I decided to put a bionic eye (thanks Wouter for encoraging me to do so!), the reins and that skull collar. The bionic savage look, you know. I also added a frame for the rifle:


This is pretty much what I did to the beast. The other four are going to be more or less in the same fashion. I've finished the conversion work:


I've already begun the painting process (primed and first layer), so I hope it won't take that much to have them finished! Fingers crossed...
Posted by Suber at 26.9.16 22 comments:

Email ThisBlogThis!Share to TwitterShare to FacebookShare to Pinterest
Labels: Mutants, World of Twilight

Quick update while working on the mutants. Some time ago my pal Keyan Sark asked me to sculpt a Miko (a Shinto shrine maiden) for different settings.
I found this beauty by Hasslefree, which could make a nice start: 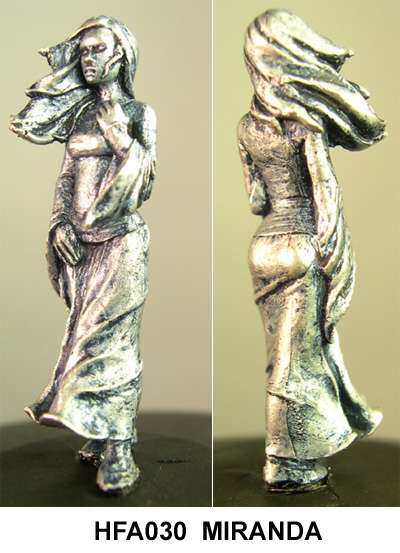 Hoping it wouldn't prove that difficult, Keyan asked me if I could make it double, so he could have two converted minis, one for self and the other one to give away. Challenges. I like challenges.

First thing was fitting the hakama (the trouser/skirt) and the upper garment, to make them look right.

Getting the hakama right needed more than one attempt. More than two. More than a hundred, I don't know. I got stuck in the folds, but it finally worked. So then I had to sculpt more hair and the tiny bag (which I was told to put by the side of the mini).

So this was my part of the deal. Keyan's outstanding skills made her look like this:

So you better check his blog! You'll find more (and better) pics there :)

A change of stuff (again) for today. This is but a project of opportunity, I must say. A few weeks ago I found what you are about to see at the newsstand. You know, september is that month when thousands of collectible thingies see the light, most of the collections never to reach their #2 issue. Ahem. To the point. I got this 1/43 Panzer VI Tiger I:


The pics says much about what happened here. First of all, this falls within the category of stuff you don't need nor even planned to get, but hey, it was so cheap you had to do it. Don't look apart, this also happened to you. This is a collection about WWII tanks; this first one was 5€ and the rest, I don't know, somewhere near the 20€ line (which is pretty decent given the models and the quality, but I'm not getting into this now!).
Second thing is the size of this beast. In the pic you can see it's next to a DUST infantry mini. Right, my first choice should have been Bolt Action or so. If only I played that game. I mean, Bolt Action, in my humble opinion, makes an excellent fantasy/sci-fi game, but not that much a 20th Century conflict game. But I am by no means an expert in rulesets, so that's all I'll say about that. Besides, this 1/43 scale monster looks ridiculously huge next to a Warlord Games mini. So, on the whole, Bolt Action was out from the table for this project.

DUST, on the other hand, would be more appropiate, as I hope we all agree we don't have to be that picky about the size of a tank in a universe in which you can deploy zombies and gorillas. OK, I guess you can see my point.
So well, I guess this was a nice chance to do something... weird to the tank (eyes rolling...). So let's see what can I find in my bits box...

If you look back my archives, you'll see that I'm not being that orthodox in DUST when it comes to the ambientation and that my Axis troops are all Hydra troops. So this had all to be painted in Hydra black...

So this is it, another couple of size comparison shots:

Well, I'm not repainting any of them. That's it. My main concern here is that, in fact, I have done nothing but a WH40K Leman Russ for DUST, hehe. But well, I think the tank now looks weird enough to fit in the ambientation, so it works for me!
That reminds me that I haven't played a DUST game in ages. That certainly has to be worked on...
(Or is that Konflikt '47 game the new black nowadays...? Hmmm...)
Posted by Suber at 20.9.16 14 comments: