Not yet finished, but I've made some progress on the Star Wars minis turned into Rogue Trader. I'm half way, so I'm posting the first batch I've finished. No particular order painting them, just the way I'm picking them from the workbench.

The first one, Ichabod Guss, merchant:

I have another mini almost finished, but I'll keep that for the second batch, so I make this into two equal parts :)
Phew, it feels good to make some progress at last! More to come anytime soon!
Posted by Suber at 31.3.16 12 comments:

This particular part of the Imperial Assault project has taken quite a long time, but I've finally managed to finish it. If you remember my latest sillyness about sci-fi civilians, you may have noticed I severed some alien heads and now I had a remnant. They of course were meant to be part of my Imperial Assault, as I realized there were four exactly identical Trandoshan bounty hunters in the game.

Well, you can certainly see where is this going to... I left one mini untouched and used the heads on the others, with some spare bits from the same minis.

So well, it was just a matter of colours then.


The variation between the models is no big deal, but at least it gives a different sensation. It's easy to recognise the original model, but they don't share that clone feeling, that's enough for me!

PS: Now that I see the pics, I realize I have to put some additional work on the Trandoshan. Being the unmodified one, I didn't touch it and I left the mold lines. Ouch. Shame on me!
Posted by Suber at 26.3.16 9 comments:

I haven't been able to produce any mini or to make any progress on... well, anything! But don't worry, I have no moral issues on cheating and showing pics of old that I have never shown on the blog :D

Gaunt's Ghosts need little introduction in the WH40K universe. A Regiment of the Imperial Guard, their home planet, Tanith, lost forever, wandering through the galaxy in a Crusade, trying to survive the horrors of the Archenemy. They represent the quintessence of Warhammer. Mere mortal men and women, facing terrible foes and the insanity of Chaos, enduring and fighting desperately for their own survival. 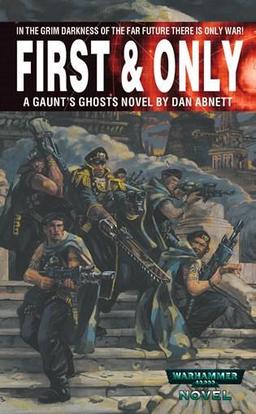 First & Only was the very first Warhammer book ever edited in Spain (sigh. Black Library policies) and it truly brought everything you may possibly want to see in an action story. It's perfect for the neophyte in Warhammer and will get you hooked to the characters and the story. I think the latest books in the series were not up to the level shown in the first ones, but that's only my personal appretiation.

Anyway! This is about minis! I'm not sure of the year this set was released, but it's still available at the GW web. So I painted these some years ago; it's just a kit of a few characters.

Colonel-Comissar Gaunt is certainly not my favourite mini of all times. Though being extremely dynamic, its slenderness or maybe the sculpt itself make me perceive it like kind of frail. However, it's one of the few charging minis I can remember, and that's something.

Colm Corbec, second in command of the Regiment, is a cool mini. Just as I thought he should look like:

'Mad' Larkin is another cool character with a mini that doesn't disappoint. Maybe this one was supposed to look thinner, not Gaunt! :P (at least in my mind)

Tolin Dorden, chief surgeon. The quiet man. I really like they decided to sculpt this one, instead of a more obvious combatant. Field medics are not often seen in miniature, and the character really deserved it.

Opposite to old Dorden, young Brin Milo, the youngest at the Regiment, with his bagpipe:

Finally, a generic Tanith trooper with a plasma gun. I think that, given the rest of the group, they could have sculpted another character, but hey, I'm not complaining.


I just took this new pic with my new scenery pieces:

Over the years I've seen some really cool conversions all over the web of full powered Tanith squads. I never did so (as everybody was already doing that!), but who knows, it's never too late, I may begin it now that no one else is collecting Tanith, hehehe.

If you haven't read the books (seriously?), you really need to.

Another cheap scenery post today. As I finished the Hakk Tee Mehl Idol, I knew I couldn't let it be just that way. I had recovered a pinch of DAS putty, but I still had most of 1 Kg. remaining (and totally dried! It was just a solid brick)

Some time ago I had done this with a branch:

A solo project whith no continuation for a couple of years... until now. I got some more branches from a local park (one of them particularly speeded up my imagination, you'll see what I mean), a few old unusable CDs... and lots of water for the DAS putty! It is indeed recoverable, no matter what. Amazing. This is what I got:

Though I managed to bring the DAS back to life, there was a setback. Due to the huge amount of water required for that, you have to let it dry for 24 h. or even more. So the process is kinda slow. After priming (black first and grey later) and basing, you get something like this:

Some colour for the sand!

I added some shades in browns and brownish green, then another swift grey spray primer (the educated painter would have used an airbrush. I don't have such commodities, so I have to improvise!) and some grass and flock. This is what I finally got. Miniatures for scale: 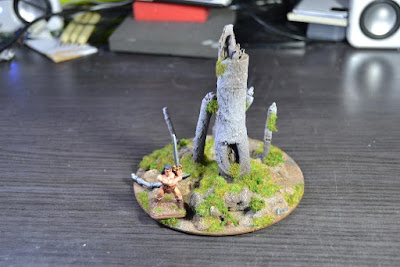 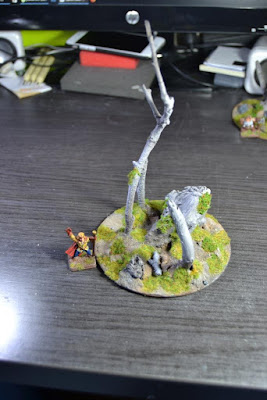 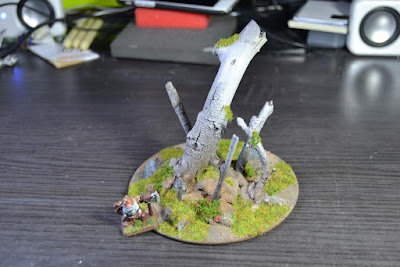 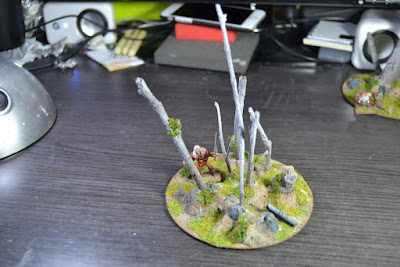 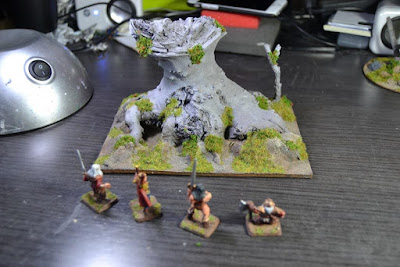 I feel that, though grey works for that dead, scary appearance, they need more a brownish look, specially the big last one. Hm, I may put some work on that one.

For the moment, for a general view... 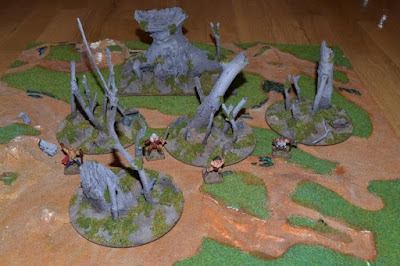 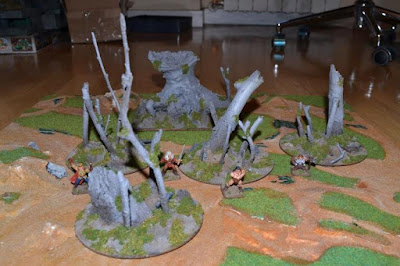 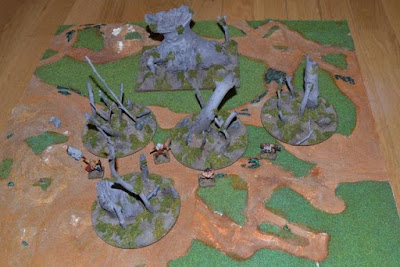 Well, cheap and easy, cannot say anything else! They still have no clear place in my urban board, but I think I can handle that...
Posted by Suber at 8.3.16 19 comments:

My progress on this matter (as on all the others...) is terribly slow. Anyway, I've managed to make some developments. Let me summarise. Long time ago, in a galax.. No. Ehm.
Long time ago I thought of a funny scenario for RT. A fugitive trying to escape within the underhive while Arbitrators were on the chase. The fugitive would be a nice character, as well as each member of the Arbites patrol. I may add a bounty hunter perhaps... and I would need some non-combatants to add some confusion to the chase scene. That was pretty much all!

You know the rest.

Today I have two 120x60 boards, enough buildings to call this a town by own merits and weird, ditinctive civilians to populate a small hive.

Of course... that is not enough!! :D
I'm finally committing to fulfil my original plan. Having a quiet mob of civilians, just for the sake of populating my urban area and add obstacles for the chase. Though I have some really fine models (and yet more Colony 87 to come, I'm simply in love with that range), I still needed some unexpensive way of getting to crowd my board.

I'm doing this by two different resources. The first batch I've begun with is this one. I got a number of cheap Wizards of the Coast Star Wars minis:

So I had to warhammer them. I've used all kind of dirty tricks, mostly GW bits. Let's go! 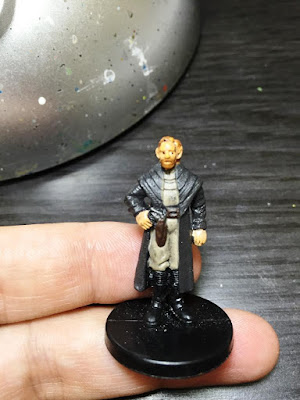 It's fun how just a head swap can change a mini. I think this one is gonna be a merchantman or something in that fashion.

It has an Empire head (with a greenstuff turban for more flavour), right arm from the Empire cannon crew and some other bits from the Adeptus Mechanicus Skitarii box.

The next one was quite simple too: 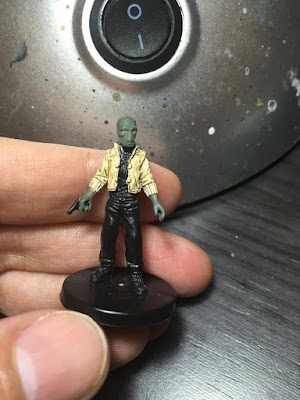 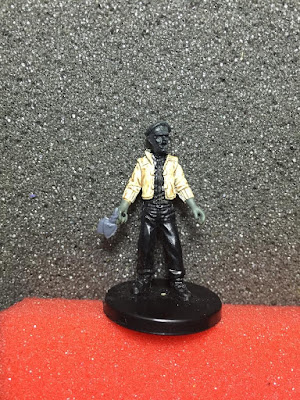 I liked the vibe of this one. Looked like a pilot or something. I added a German Officer head from Bolt Action and replaced the gun with some Bretonnian stuff (the keyring of his ship!)

Next one had an interesting pose: 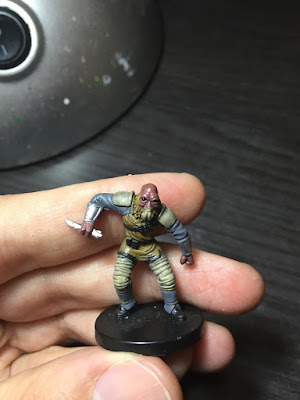 I totally reinterpreted the mini. I put him nothing on his hands. Not everybody goes on the street carrying stuff, I just wanted someone to represent that. 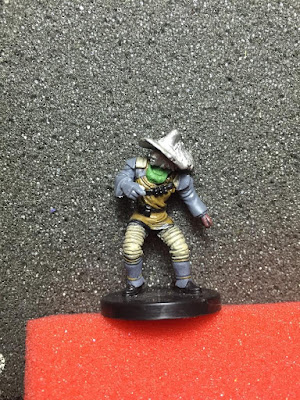 I can't remember the source of the head. Some TYW-like thing. 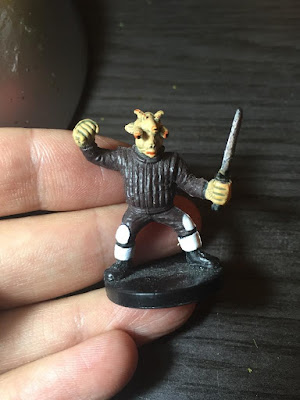 This one would make a nice protester, the pose was asking for it...

Time for a lady: 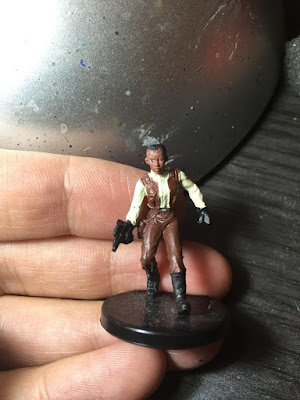 A pity how underrepresented women are in the hobby. But that's a dicussion for another day... 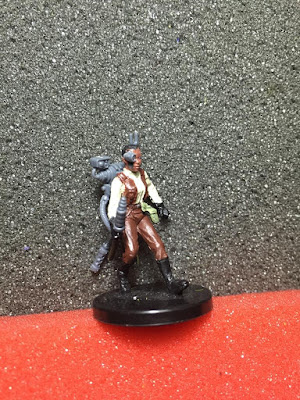 They all are GW Skitarii bits. Best. Box. Ever.

This one was nice: 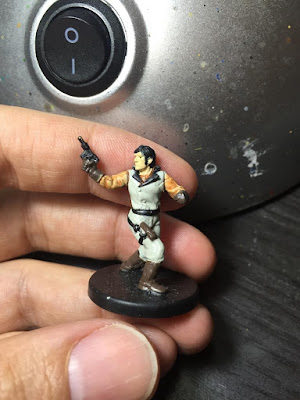 I loved the pose, but I really wasn't looking for another bravado fighter, but for civilians. I cut the poor guy and got two minis out of him.
The legs were way too dynamic, nevertheless, so in the end I came with this sort of Bailiff officer (or whatever)... 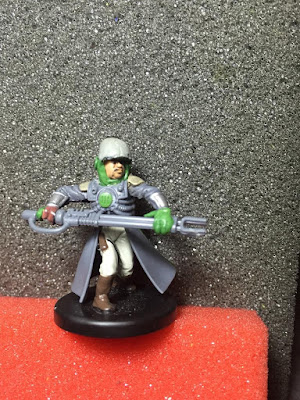 ...and this worker with the rest of the Skitarii bits: 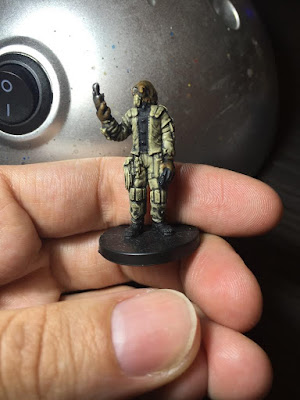 Just a head swap, that's all: 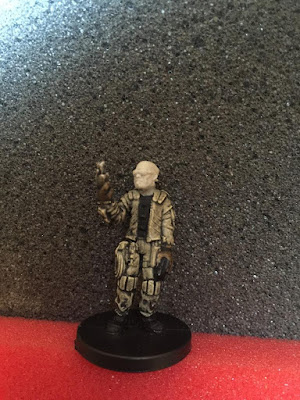 The head is from Maxmini. I should have worked on his hands (they are three fingered), but I hope no one will notice (damn, I just called your attention on it!)

With another of these heads I turned this... 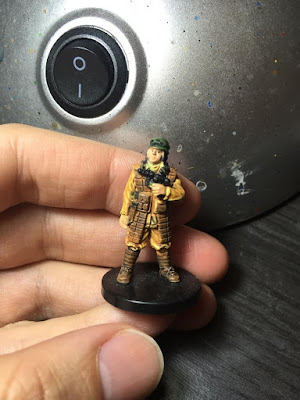 ...into this other protester:

A third Maxmini head allowed me to turn this weird alien... 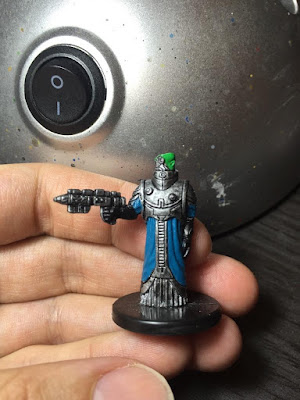 ... into some kind of Administratum clerk or something like that. We'll see when I get to paint him: 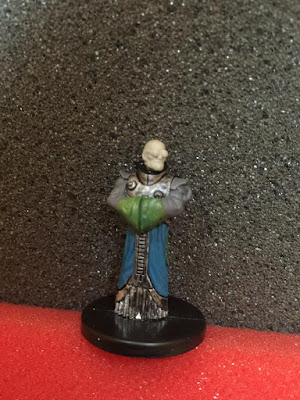 Finally, the last one. I firstly thought this could make another protester, maybe bearing a baseball bat against authority, or maybe a sign... 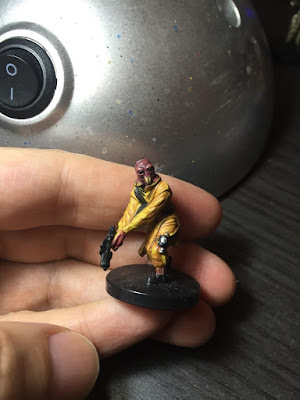 But I changed my mind. I had these arms from the same Empire cannon crew. He's holding a cannon ball, but I guess I'll change that to some fruit or stuff when painting and so he'll become a fruit vendor or a merchantman or something in that line:

This is all for now! Just the naked conversions, I'm afraid. I'll try to spill some paint on them as soon as possible, but for now I'm fairly content with what I have. I'm finally into my original project! Wee!
Posted by Suber at 4.3.16 31 comments: