New project ahead! Oh, come on, you really didn't expect me to keep on track and focused on anything, did you?
Some time ago I backed the Punkapocalyptic KS. Not only the guys behind are the friends of a friend, but the minis looked seriously appealing to me. You may want to have a look at their web, for they have some pretty cool stuff (including the rules for download).

I got two bands, Gangers and Junkers. Gangers fall into the classic 'Mad Max' post-apoc vibe. I took a darker approach than the 'official' paintjob. Still not sure it that was wise on my part, as they now don't stand out as much as I woud have liked. Anyway, here you have them:

I made a slight conversion on the mini above. It came with a shotgun on her right hand, but the mini came damaged over the post, so I replaced the whole hand with this other one with the crossbow, which was an alternate weapon for the Badass above. I tried to make something scary for the banner, but failed. The original idea was a demon skull (yup, those should be little horns), with flaming jaws and the radioactive warning sign instead of eyes. All I got was a freehand that looks like a guy on LSD, what can I say. I tried.

OK, let's go on. This one is the brute of the group.

Utterly unsatisfied with that one, too dark. I may repaint the armour in a brighter colour.

More. I wanted to avoid the obvious Green Arrow reference, so I tried this:

Now, I get the Kratos reference too, but I'm not into video games and have never played the God of War franchise, so I fancied to do something different...

All the bases are pretty plain, maybe too much. As they depict some wasteland, I haven't added any grass or anything, but just this scorched aspect. Maybe I could add some yellow spent flock, hmm.

I cannot get tired of repeating how such awesome people you can get to meet into this hobby. I have received several minis from friends along the years, and I myself as well have given away some; karma keeps flowing, whatever. But today, well, today I bring something totally different. My pal Rinahe (generous donor for some of the coolest stuff I had here in recent times!) took the following step and decided to sculpt a RT beast out from scratch just for my own particular bestiary. Wow. Just wow.

He chose to do the mythical Enslaver, back from the pages of the Rogue Trader manual.

Enslavers are psychic creatures that dwell in the Warp, coming to the physical realm to... well, enslave other beings, make them act according to their will and feed over their minds. For a more accurate description, I always reccomend Lexicanum.

Please let me show the sculpting process my pal went through. He took a walnut as a start point. Right. A frakkin' walnut served as inspiration and main body: 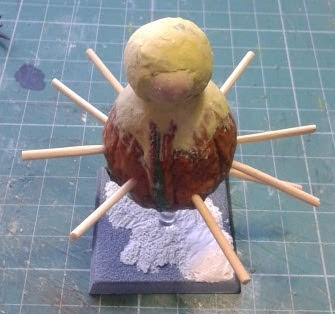 First shapes are given with DAS putty and the tentacles come from another (rather awesome) project he is carrying through right now. 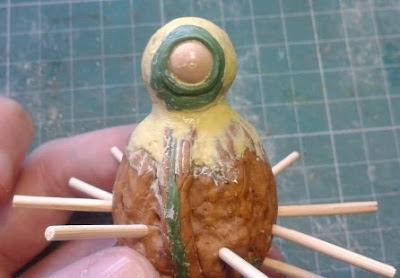 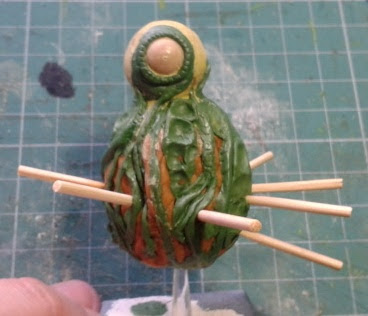 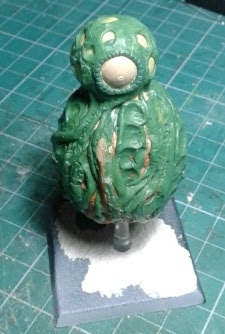 For me the process is quite amazing. I mean, he insists to say that it's not like sculpting human faces or stuff like that, but I must give him the credit of having an idea and executing it in a way I hadn't expected! 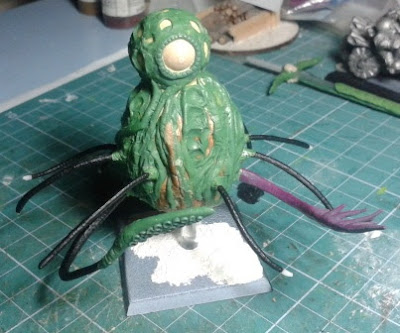 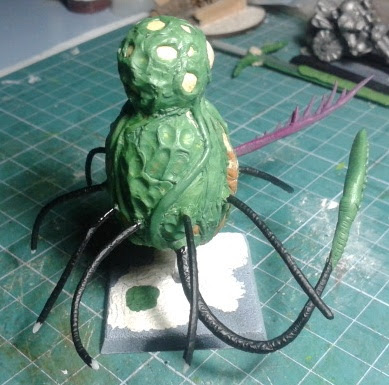 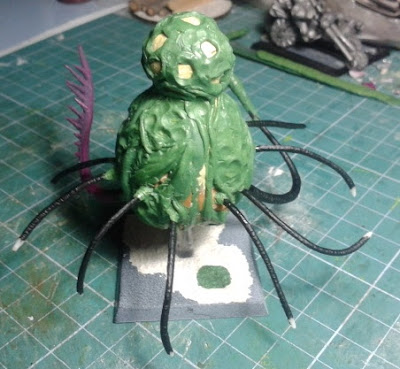 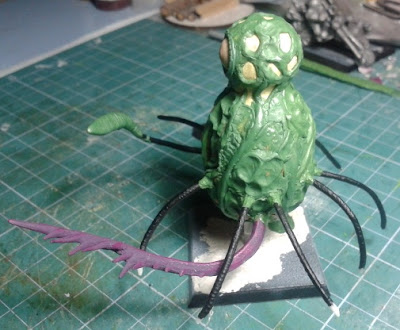 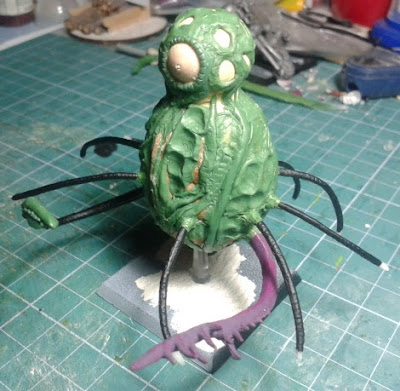 So OK. I was given this glorious beast. I was officially in awe. A big thanks, man!!
Now over my shoulders came the responsibility of making justice to this insidious Xeno. Glups!

According to classic fluff, Enslavers can change colour, but they usually are leather brown, with lighter tentacles and the so-called eye (though not really being an actual eye as we humans understand that organ) can be red, orange or purple.


I really think the sculpt catches all the vibe of the original design, it's enormously great, and a real pleasure to paint!
Now I think it also provides a really interesting element for any scenario, so... I have to come up with one! The creature commands, we obey!
Posted by Suber at 25.4.16 24 comments:

Colour up the town

Time to bring some colour upon the crazy big building I showed you last week. Ehm. Well, that colour will be mostly dark grey. Ahem.

First step is just spray it all over. I also created some dirt effects and stuff with different sprays. In the pic below you can see I also had hand painted the window frames.

The process here is really very simple. I painted the windows (I had to use a darker tone than usual, as the building was asking for a gloomy, dready aspect) and added some pretty basic graffiti. I also used some street signs and ads (I got them from the internet ages ago; I've been trying to source them back again and I haven't been able to do so. If anyone knows where these came from, I'll gladly credit the guy who offered them; thanks!)


The tiny stuff is what really makes any project come true. So I think it's worth of trying to add small details here and there. You have to reach a balance point, of course. I'm not trying to recreate a perfect, movie-standard reproduction of anything, but just to achieve an interesting piece of scenery, above the dull ubiquitous ruin-stuff.

Let's go for some close-ups. The archway stairs:

I also added some wiring. Not as chaotic as I intended, but I'm learning and will hopefully improve in the future. I tried to show some messy electrical stuff over the streets. Just my first experiment.

I also added a religious icon over the arch (from the Bretonnian command group). It enhanced the medieval aspect of it, a Saint's image over the entrance; you can find stuff like this in several actual medieval gates and I thought it wasn't out of place.


A few posters come from this wonderful NASA link. Right, a number of retro-futuristic images, totally delightful. For example:

You may have noticed another ones, more WH40K specific. I designed them, thought it would be fun. I had to make an English version (so the pun was recognizable) and then a Latin Gothic translation, as it seemed logic that the Imperium printed this in the official language: 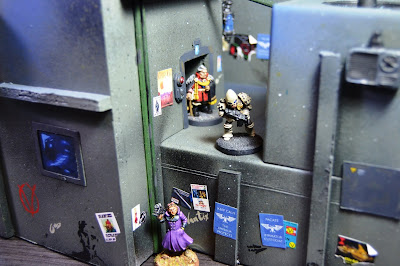 Well, so this is it. I've learned some things about what to repeat and what not to do ever again, hehe. It's been a fun project, so I pretend to do some more buildings in this fashion. But first I still have to attend the lead mountain!
Posted by Suber at 20.4.16 30 comments:

Boys and their toys

Time for some Star Wars love again. I've picked a relatively simple endeavour, the E-Web engineers. There are just two of them, so I could leave one as it is and convert only one mini. Besides, it's all black and white, so there won't be that much work! Laziness, I hear you scream? Meh, I prefer time & resources optimization :D :D

So there we go. The first one is the untouched one. Just as it is:


The thing about converting the other mini is that I honestly didn't know where to start. I mean, it's a guy shooting his gun, what could I do? I took the easiest solution, I put him at ease, proudly posing for an Imperial propaganda poster :D

You can see this involved quite a reposing effort, hehe. I had to cut every limb out from the poor guy and fix all his articulations. I'm unhappy with his right knee, but I'm not redoing any work for the moment.

I still haven't even opened the rulebook, but as far as I'm concerned, I think it's important to make differences between minis for gaming purposes (some kind of Descent like stuff, I've heard), so at least these two meet that requirement!

One of the things I was missing on my urban board was some chaotic nature in the city development. I mean, I have a number of beautiful MDF buildings (and some more still in their boxes awaiting for the moment to come!), but they all share a feeling of, I don't know, maybe 'order'. I mean, they offer me sound volumes, perfect shapes... If I painted them in a delicate, clean way, they would no doubt fit in a more elegant setting. But I was looking for a more shanty town look, though not exactly that. Confusing, I know.

Then I realized that in fact I already knew what I was really looking for. Not a junktown. I was looking for a medieval sci-fi town. Let me elaborate. The interesting thing about this board would be offering an intrincate labyrinth of crossing streets, walkways, different heights, that kind of stuff. I wanted to give the impression of uncontrolled growth.

My perfect example would be the Italian town of Sanremo. I had the chance to stay there for a couple of weeks some years ago and the old town, La Pigna, totally represents what I mean. A maze of streets going up and down, buildings towering over more buildings... there is an intrincate beauty in that, seriously. Just google some pics of Sanremo La Pigna.

OK, of course such a thing is out of reach for my skills, my board and my... everything. But yet I could do some stuff and make the difference with my previous MDF buildings. So, with a box and some foamcard I begun to create some shapes...


The addition of the second tower didn't really please me, but I only saw that once it was assembled. It was a little too much, but it was a way to make this on the rear part:

I begun to make some additions to somehow disguise the bulky appearance:


The rear part needed some stuff too, but nothing so large:


So, once the main body is defined, it's time to think about the details:

I'm trying to achieve a mix of that medieval flavour (messy buildings with no order) with a low-tech scifi setting, which I think I must favour above the former. Maybe it's too bulky, that's my main regret/concern about it, but well, it's done and it is what it is. I still have to see how it looks once painted and on the board.
But for the moment it's quite a start!
Posted by Suber at 11.4.16 27 comments: