I've been neglecting the comic issues these days, but here I am again. Let's get back to Brent and El'Kais... 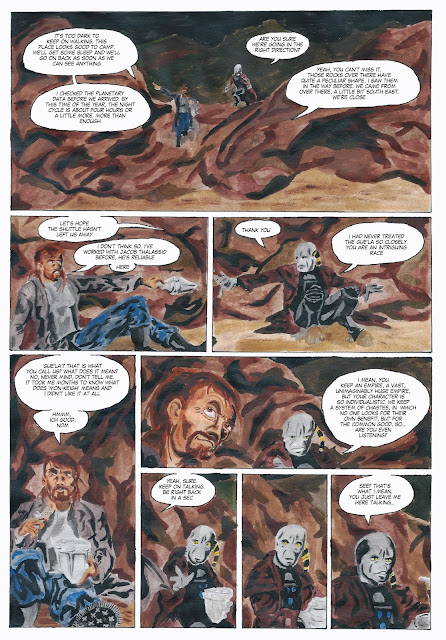 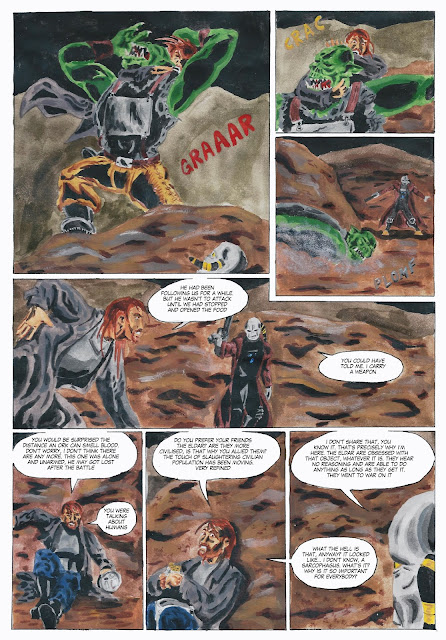 A transition scene more than any other thing. A little character building, but mostly a reminder of time, so the overall sense of action in the big picture makes sense. Maybe I should have used more pages and time on the Brent-El'Kais relationship and the motivation of the Tau, but the script and panel allocation called for this kind of path if I wanted to get anywhere with the story; so I thought I should at least tell something about the Tau people but without making the story dull with neverending texts.

The story moves on, now we'll be focusing back on the main characters for the next pages (in fact until we reach the end of what I've got! But that may be some kind of spoiler, so I won't tell anything more for now)

The title, yet boring, is quite revealing. A friend handed me this mini some time ago and I wanted to paint it since then. This week, on the verge of the Stranger Things Season Two release, I felt the itch more than ever, so I had to spill some paint on it.

I wanted a colourful approach, far from any lizard, earthy looking. The blue/green skin was the point of start (different combinations of Vallejo black green and lighter shades of blue), and then I thought purple would be a nice colour for a change, instead of the classical creamy tones I always use for reptile bellies.

The lights on purple were made by adding Vallejo dark flesh, and it worked better than expected. I rejected the idea of reptilian eyes, as I wanted something more supernatural, Demogorgon being a demon prince and so. Blue works nice for that, I feel more comfortable with it than red; reflected light and red glowing objects is something I still have to practise, as I only get the looking of strawberry chewing gum flooding everything. Blue is nice, and its coldness suits the mini.

The mini belonged of course to the old Grenadier ranges, but is now released by Mirliton. It's been a refreshing stop after the civilian mob, quite useful to reset my brains and start over new stuff.
I'm now looking forward to Stranger Things Season Two, but for now this is it. Enjoy and see you upside down!
Posted by Suber at 27.10.17 18 comments:

Email ThisBlogThis!Share to TwitterShare to FacebookShare to Pinterest
Labels: Mirliton

I can't blame you if you forgot of these, it's been a time. I've finished the angry mob (here you can see the first batch, just in case), so they're finally ready to run some proper riots. As before, they've been but a quick, negligent paintjob, looking for setting a mob rather than greatly painted characters. heer you have them:


So, finally, how do they all look when together?

I still have to build a couple of things for the scenario I have in mind, but I think this is all taking shape...
Posted by Suber at 22.10.17 17 comments:

Playing 'We Were Brothers'

I hadn't heard of this game until now, when my friend Pablo (you know, the bloke I play board games with -man, you almost need a label of you own in this blog) brought it over the other day. 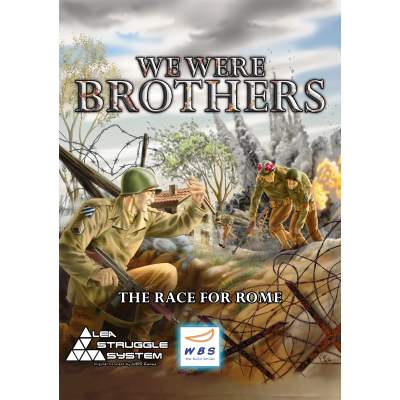 It's a boardgame that covers the campaign on Italy, so you can play with British, Americans, Germans or Italians, through a series of historical scenarios that cover Operations Husky, Avalanche and Shingle.
For our introductory game we chose an easy scenario, to grasp the core rules. Americans vs. Germans, 4 minis each side (you can get an idea of the level of detail we're talking about!). The goal here was to scout the board, reckoning all three buildings on it:

Hexagons are the new black. Not only you'll move counting hexes; if you look close, you'll see some darker markings. Those enclose the 'mega-hexes', which are relevant for weapons range. In the pic below you can notice a blue token on the left side of the board. That is the wind gauge. Yes. The direction of the wind is relevant here.

The characters sheet takes acount of what weapon does each one bear, the ammo left, grenades left and any modifier to the stats you may achieve during the game:

About the game system... well, this was quite new for me. Instead of using modifiers or charts (you know, the typical '-1 if long range, -2 if behind cover...') you use different dice. The colour reference indicates the 'harm potential' of the dice (more or less in the way that Descent or Imperial Assault use them). Let me explain with an example. The Mauser Kar 98K in the pic above serves. If you shoot it within a range of 4 megahexes, you'll roll a yellow die. If you shoot up to 12 megahexes, a blue die. BUT if there are any modifiers (target behind cover, for example), you'll use the die which is below (so if you were to shoot using the yellow die, you'll use the green one instead; if you were to use the blue one, you'll be using the red one instead). Modifiers are acumulative, so though you are supposed to use a blue die to shoot, you may end up using the grey one, for example.
Don't worry, we'll see some examples.

About the minis... I don't really know if these were something widespread or only local, but when I was a child, back in the early '80s, I used to buy (well, my parents had to) these toy plastic soldiers that came in paper envelopes. Bendy plastic, about 10-15mm... Have you ever seen them, do you even know what I'm talking about?
Well, the minis in this game reminded me of those. Kind of exactly the same minis.

Each turn you roll initative (modified roll if you have an Officer/NCO, if you have more troops than your opponent, that stuff). The turn sequence is divided into three phases. Action/Movement/Resolving pending stuff. During your action you can do almost anything; shooting, jumping a fence, going to ground, kneeling, whatever. In the pic below you see one German trooper using his action to unlock a door, so they can get and search it.

You may have noticed small tokens beside each mini. that is to ID them, so you can know which one you are activating and the weapons/actions related to that specific soldier.

First shoot! An American soldier opens fire on the enemy. He was 7 megahexes far and there were a couple of obstacles in the middle; so, instead of the green die he would regularly had to use, he had to use the pink die:

The Germans move towards the closest building...

An American throws a grenade to the Germans. Max range is three megahexes. He rolls the grey and blue dice. Grey will say if it hits (if you get the thumb up symbol) -or scatters; and blue will say how much it deviates from the target.

The angry German, unharmed, throws a grenade himself!

Now you have to roll the blue die for each soldier affected, to determine the wounds. First one:

Let's see how about the second one:

Things had got wild quite suddenly! The Americans had to think their moves carefully. The trooper inside the house went up to the upper floor to get a better firing position. The other one moved towards the central building, but the rest of the Germans moved forward too...

Things look quite lost. A German soldier is behind the wall, another one is inside the building, going upstaris to shoot from the window, and a third one is running towards the house while being covered by his mates:

The American soldier takes a problem at a time. First thing, the running man. He shoots and...

From this point on I have to say we made a mistake. My pal thought that, when shooting to a mini inside a building (in this case me shooting him), you have to roll the grey and red dice, and only if you got the skull sign on the red die you aimed correctly. But the rules aren't like that. You roll both, and when you get the 'thumb up' sign on the grey die you have aimed correctly. What getting the skull on the red die really means is that the enemy has spotted you first and shoots you before! So it's an extra shot for your enemy, nothing else.

So during the next turns the only thing I did was shooting and wasting my ammo. I got some thumbs (and discarded them!), but never got the skull, so we thought that the house was the most effective fortress ever.
In the meantime...

So it suddenly became all equal again! One vs one. But both soldiers were entrenched in the buildings across the street. There was a point in which the gunshot between the last two survivors became stupid. I decided to take my chances, left my position and run towards the building, decided to storm it. But then the American did the same. They both met at the door...

Well, I think it is quite safe to say that, had we not made that mistake about aiming, the victory would have been German. Anyway, it all was extremely epic, and that's all one can ask from a game like this. I thought the learning curve would be worse, but it really wasn't. Once you get the basic ideas, it all goes quite swift. The turn sequence makes a lot of sense and the micromanagement of your Squad is not complicated at all. The only important thing is keeping track of what soldier you have activated and the colour code for the dice, so you know what to roll on each occasion. I have to say that this system is fun; at least different from the usual stuff. A different way to mess with statistics, I liked it.

For an introductory game this was more than nice, but you can run larger games with more people involved; there are even rules for tanks. I'd like to see what's the game like at Platoon level, seems interesting.
This is of course quite far from a Bolt Action concept or so (which was essentially my only previous experience with WWII). The game is very tactical, detailed and well thought, with high doses of realism. We still have to exploit its possibilities, which look way much more varied than this introductory skirmish. The game is an interesting find, if you have the chance, give it a try, I don't think you'll be disappointed.
Posted by Suber at 16.10.17 16 comments: