Rough row of days, but I'm painting the civvies as fast as I can. Let me show you what I have so far, almost half of the whole group.

You'll see, I'm favouring quick results over high resolution details. I just pretend to have a decent sized mob. I've used some really flashy colours (the Warhammer effect, you know), but as I was taking pics I realised I need a richer palette. Will take that into consideration for the next batch.
I also have a couple of signs, I wanted them to be on the cheesy side, no resemblance of any current political movement whatsoever. They of course are in Latin Gothic, as you could legitimately expect.

So let's see what we have!

This is as far as I've got for the moment. I have all the rest primed, so I hope I'll be throwing some paint at them anytime soon. I'm on it!
Posted by Suber at 27.9.17 18 comments:

Meanwhile up on board the Eldar ship Menelvagor... 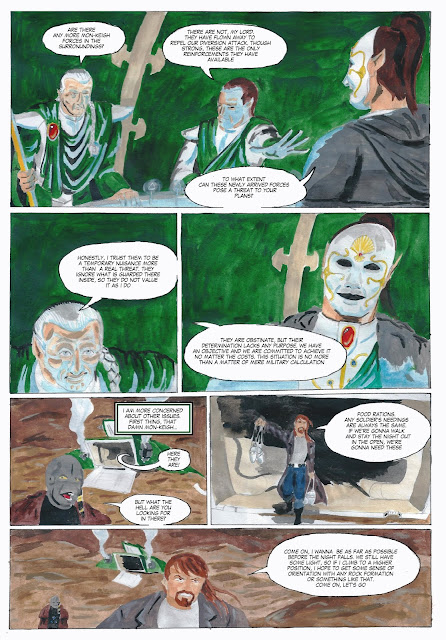 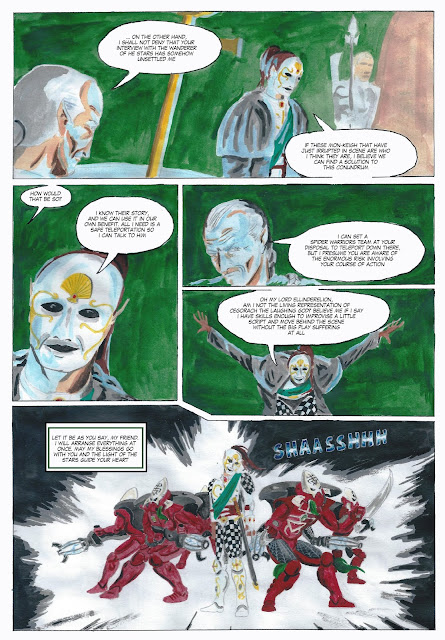 We cannot lose track of the Eldar plot here, as they are pushing hard to get the place, remember. The unexpected intervention of the Dark Angels is a real setback, they have come to strike from nowhere (but that's what one could legitimately expect from a Space Marines force!) and now High Farseer Ellinderelion is somehow unsettled by the turn of the events.

As he has pressing issues on that side, we are no longer sure if he's chasing Brent and El'Kais or if he's simply letting the destiny to happen, as per his predictions. As the outlaws don't know either, they better move as quickly as they can.

But the real situation is the new balance of forces. A combined force of Blood Angels and Dark Angels means a lot of problems. The Eldar had engaged a civilian settlement to divert Imperial forces, so it would become meaningless if they have those Space Marines fiddling around. We know Eldar are not prone to open battle with such odds, they cannot afford spending their lives in bare clashes of forces, every combat for them must have a purpose. Apparently the Great Harlequin has an idea. What can that be...?

Here it is, the project I was talking about last week. Where to start...

I have a plan.

I have plans for running a Rogue Trader game in which a group of Arbites will try to contain an angry mob of citizens gone wild. They will try to overrun the Arbites and kidnap/kill/whatever the Governor, ransack the local market and show random general civil unrest. I have some ideas in mind for the rules and so.

But I needed an angry mob of citizens! Right, I have quite an extensive collection of civilians by now, but I wanted some specific protesters, not only bold adventurers. Numbers is what matters in this case, so I needed an unexpensive solution for hoarding a respectable amount of minis. My salvation came under the form of the Wargames Factory zombie survivors. The price/quality/(quantity) rate was just too good to let it go. So using that and some other bits I had (WHFB, 40K Skitarii...) I got all the greenstuff I had and begun to do silly things. Here you have them, in no particular order:

You can see this group is highly incoherent eclectic. Inspiration has come from many places, from the City of Jedha from Rogue One (really nice designs for civvies there!) to actual pics from riots from here and there.
From quite a long time I considered purchasing the wonderful rioters by Offensive Miniatures, but in the end I took the cheap solution. The only thing that bothers me (well, 'bother', I'm talking about plastic toys) is the lack of females in the box. A mixed box (a male sprue and a female sprue) would have been just perfect. Anyway, though unexpensive, I think I'm not buying the ladies' box, my revolt will have to work with these. I have way more than enough for my scenario.

No clue of when will I be able to paint them, but it looks like the Arbites are going to have a rough day...
Posted by Suber at 18.9.17 32 comments:

A second tough, badass warrior woman in a row!

You may remember the female Barbarian I painted for my HeroQuest (or you may not, hence this link). The thing is that I loved the pose of the mini so much that I got two copies, with a specific idea in mind: I was doing an adventurer for RT settings.

I didn't have a clear idea of what was I specifically aiming for, so I let it flow and begun to add stuff from the bits box. This is the result:

Let's have some close-ups. As you can see the general attitude remains (well, that was what called my eye in the first place).

Main change was cutting the shield away. I sculpted a crude wristband and added an autogun (from a Necromunda weapons sprue?).

I also replaced the axe with a combat knife, which looked much more in place:

Finally a Death Korps of Krieg backpack and this is pretty much it, we have a low-tech barbarian ready to live some adventures in the grimdark millenium blah blah

The face sculpt looked good enough to me to try dark skin. I mean, it didn't tell me that clearly 'caucasian'. Lips and nose weren't ultra thin, half of the face was covered by the bionic eye and I think the experiment worked good enough. I also read the clothes differently from the original, and used the full longcoat idea, which also works fine. You may see some attempt of embroidery pattern so it didn't look too flat. Red and yellow were almost default colours to roguetraderise the mini, but now I miss some checkers :P

It's a very simple conversion, not much greenstuff was used on her, it's been more a matter of kitbashing. Thing is I'm using quite a bit of greenstuff these days as I'm working an a wider project (unrelated to this lady). I hope I'll be able to show something next week.
See you then!
Posted by Suber at 15.9.17 14 comments: