The title may say nothing to you, but let me explain, Paraeroa is Maori for 'Veteran' (At least that is what the dictionary I've consulted says!). After two characters, it was time to start building up the Veterans squad. So here you have the first one. Let's see the process. The original mini was this terminator:
[Cut cut, chop, glue glue, putty, putty]

I kept on dismembering my Raptors marines. The change of pose is evident. Not as aggressive as the original, maybe, but it works for my purposes. Here you have it once painted:

Yeah, I know, writing 'Veteran' on a Veteran mini is kind of lame. I have to work on better signs...

Just to remember the size of these blokes:

Fear not, I have not forgotten about my other projects, I simply followed the momentum and built this one. I'm in greenstuff mood, so I'm working simultaneously on the next mini for this force and on certain mechanical mount (wink, wink). Any of them soon on your screens!
Posted by Suber at 25.4.18 26 comments:

Though the title may be quite self explanatory, I'll yet try to surprise you. A few weeks ago I got to show the Space Sharks Captain and told you about my plan of mustering a realscale force.

Now it is time to show my evil plan, or at least part of it. You may be familiar with this mini...

I forgot to take a pic from my own original model, ooops. Well, the thing is, here we have a Space Marine in Terminator Armour... You see where I am going here?

Right, you might have seen several conversions of the Space Hulk minis, but I sincerely hope you have never seen what I am about to do with them :D
I pretend to use the Space Hulk terminators as realscale marines. Given the baroque ornamentation of all of them, I hope I can make a Veteran squad out of these minis, as well as some characters. So I'm starting with the Librarian, as I think it will be the easiest of all the bunch.

In the pic above you can see what I'm doing, cutting out the back structure, but leaving the rest more or less untouched. Then I need some rebuilding work with greenstuff...

So the conversion is rather simple, you see. As said before, that is why I chose this model, to try the basics and see where the limits are. He looks like this when painted...


Some decisions I made. I'm replacing ordinary bases for flat ones (by Renedra). It's something I saw at Lead Adventure Forum and I really like it. As these minis have the metal tag no more, there is no need for slotta bases. A little bit minimalist, well, but I like innovating. Thanks for the idea, Elbows!
There is a hole in the mound. I wanted to sculpt some weird lizard or something, but I've been unsuccessful so far. I might give it another try at some point in the future.
Acoording to official background, Carcharodons are extremely pale, as descendenas of the Raven Guard, and have deep, dark eyes with almost no sclera. Just like sharks, how original. Ahem. I simply ignored that and painted him with tanned skin; I didn't dare to paint Maori tattoos on his face, the risk of screwing it all was too high.

Talking about the Maori inspiration for the Carcharodons, I painted a Tiki on the kneepad. It's a symbol of the first man, the relation between men and gods; I thought it might be appropiate for the guy with the magic powers.

I also mase some other Maori inspired decorations, but didn't want to overdo the mini. The armour looks mildly worn, as it is the general aspect I want this force to have.

I also replaced the Captain's base, so here you have them both:

This is it for today. But it has started! From now on you can expect the whole set of Space Hulk termies to be desecrated and converted into towering realscale badasses. More to come soon(ish)!
Posted by Suber at 19.4.18 18 comments:

It's a game of thrones


This (finally!) is the long awaited continuation to the Genestealer Patriarch throne I once promised. So well, first things first, let's have a Patriarch!

I forgot to take a pic before priming it, so here you have it once painted, you can see I added a sexy belly and stuff:

I repositioned the right hand, so instead the Charles Xavier pose it now resembles more a blessing lord, kind of a Pantocrator, which suits the vibe, I hope.

Sooo, the throne. I begun to build some structure around it.

Well, it is a large throne room, but it is due to the fact that I had something special in mind...

I used Das putty to make rough rock walls, so the room itself looked like recently excavated, in accordance with the rock to which the throne itself is attached.
But the question stands, I guess. Why so large? Well, in fact it never was my idea to make just a mere diorama...


Time to reveal my plans! I am to build a full Space Hulk like board, but full 3D, set in the mine and underground catacombs in wich the Genestealer Cult dwells. So the throne room will be the starting point; it's as good as any other. In the first moment I painted it like this:

But you know what? When I saw it all so grey and dark I realised I didn't like it. I thought that a whole board this gloom would be too much for me. I wanted something less grimdark and in another fashion. So I repainted it:

Then I begun to add details. Let's see some:

Yup, a secret escape door, I've thought of everything :D

Let's see it all finished! 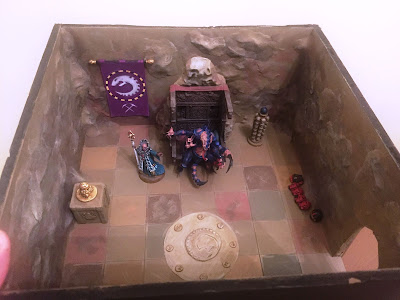 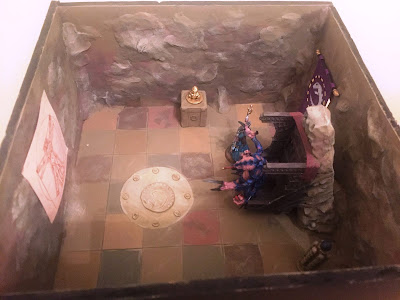 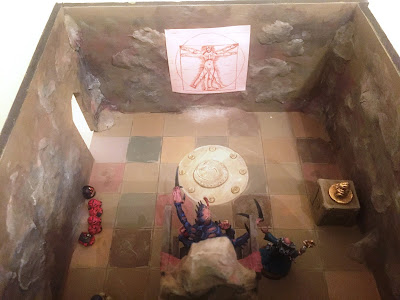 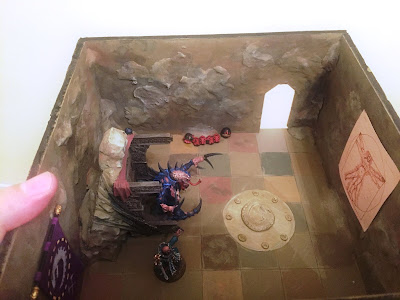 I didn't glue the golden idol so I can move it, just in case an adventurer decides to steal it, you know ;). Close ups of the details: 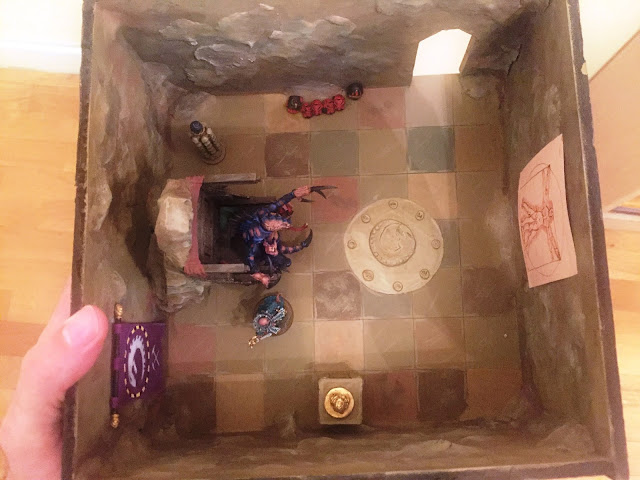 Now I can say it. It has started. This will be only the first of many other rooms and corridors to come. Wish me luck for I am going to need it!
Posted by Suber at 13.4.18 37 comments: 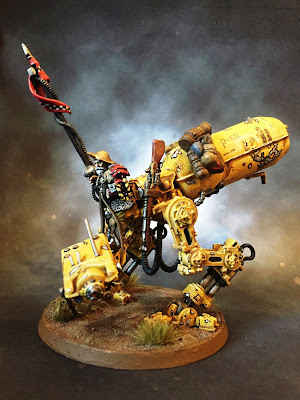 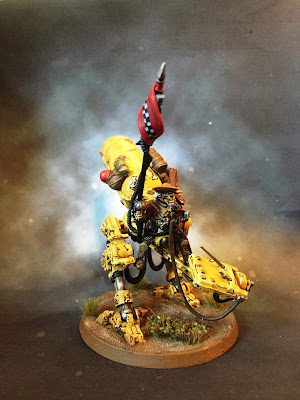 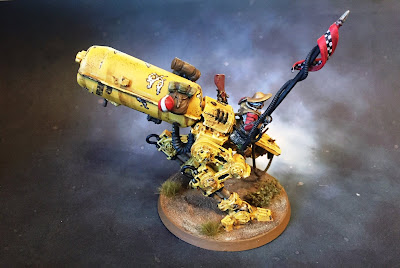 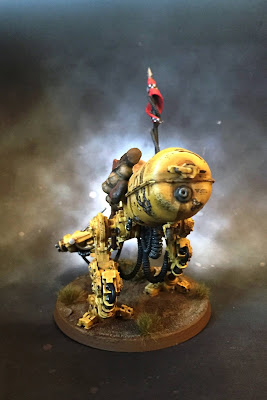 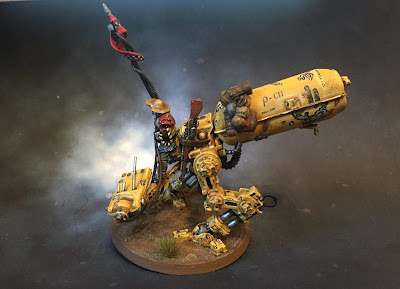 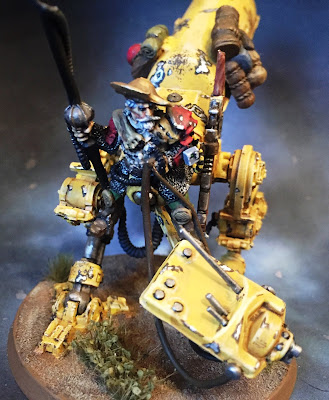 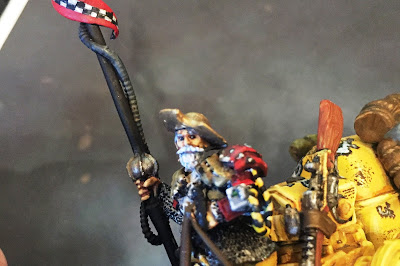 
Phew! It's taken some more time than expected (RealLifetm, you know), but here it is. But of course, if I've dared to take this Quixotesque path (in so many ways), it means that this project has just doubled, for now I need a sidekick worth of Don Quirixote of Manchae Prime!
Posted by Suber at 3.4.18 32 comments: