Refuelling station (or something)

"How confinement is developing my ability to recycle rubbish" :D

I'm building another piece of scenery, to be part of my ongoing desert series, such as the moisture vaporator, the control station building or the infamous windmill. Of course, in these times of quarantine there is an item which is essential, the true cornerstone of the whole project. The most valuable object of desire during the first days of this apocalypse madness...
Toilet paper roll.

So, how am I turning all the crap above into something? Let's see! First thing is that card is a fun material to work with, it allowed me to cut through it so I could use more interesting shapes.

I glued round sections inside the roll. Part of them will be seen and they add consistency to such a fragile structure.


Then I added this etched brass grid I had been keeping from an old model for decades:

I repeated the process on the console. It's a tiny piece I've produced and cloned for my mining town; you may spot some of them there.

So this is the main element:

Then I started to work on the other piece, a deodorant. You can observe the six square pieces down there, which are meant to be the actual fuel dispensers. Or something


I know, it really doesn't look like a fuel station, not even for an abandoned post in the wasteland desert. I had to reinforce the idea, so I added this tank.

Hmmm, do you think this is going to work?

After some white priming...


Way too new and pristine. First thing is to add the marks and whatever, and then a first medium brown wash.

This could work for Star Wars, but you know, the 41st millenium is famous for its shortage of qualified cleaning and maintenance professionals. Second step consisted of more defined stains with a darker brown.

The third step was to add rust and dirt with a sponge:

The final touch was the wiring. You know, the green stuff cables and thread wires. This is the result:


I guess that if this is the only option you have right in the middle of the desert, you will have to take the risk and refuel here...

Little by little I'm getting quite a nice bunch of scenery. I can use these elements by themselves or in combination with the town, which gives me some nice options for scenarios. I don't think I can storage many more pieces, but in the meantime I'll keep on producing them!
Posted by Suber at 24.4.20 43 comments:

I showed the Firefly characters earlier this year (by triplicate!), but I still had to paint all the bad guys. I finally managed to do so! Yes, by triplicate again, of course!

We essentially have two types of bad guys, cowboys and thugs. Cowboys bear firearms and thugs carry close combat weapons. As much as I observed and examined the minis, I couldn't relate them to specific episodes in the show. That puzzled me; all the main characters have pretty accurate minis, gorgeously obssesive in details. I refused to believe these were generic goons, just made up for the board game. They had to be Patience's gunslingers or Niska's minions. But a Google search didn't bring any satisfactory results.

So I took the only reasonable way of action.

I watched the whole series and movie again.

Only reasonable way of action, I say.

Take my love, take my land, take me where I cannot staaaand...

The unbelievable result is that the minis are made up goons indeed. No trace of them all over the show. Puzzling.
But hey, that was an opportunity then. I could paint all the minis just as I pleased, didn't have to follow any pattern.
So here they are. First, the cowboys:


They are nice, but a little bit 'too cowboy', if you know what I mean. In the show they have AK-47, machine guns, a mix of old and modern clothes an quite a lot of anachronistic details. These almost look like real cowboys!


I chose earthy colours for all of them, apart from some touches of colour on the more modern looking clothes. Oh, BTW, yes, the poncho tries to replicate THE Western poncho, of course. There's no point in having a poncho if you don't paint it like the Clint Eastwood one.


Well, the other set of goons is very, very different. They are more evidently urban looking. To me they really look like straight from a 90's beat'em up game:


I tried a different palette for these, but not too saturated. I guess that the Paw Patrol guy simply came to mind, these are the side effects of the Suberlings, you know. Also, the guy with the mohawk -my first idea was to paint his skin dark, to add more racial variety, but then I watched the mini closer and could only see Zangief. So Zangief it was. I know you can understand me :D


So this is it, I finally painted three full sets of the game, expansions included. Now I only have to wait for the confinement to end and find some time with one of the fellas I painted these for (or even the two of them. Whatever!). I really fancy to give the game a try.

Day whatever of confinement. Though we're doing good given the circumstances, my mind usually goes faster and beyond recommendable standards. So beware. I'm trying an experiment [Spoiler: doesn't end well]. With all the bombardment from the news, the situation and all, I remembered I have all the Dark Imperium box inside... well, a box. And I remembered there's a Champion of Nurgle in the set. And then a (EU approved led) bulb lit over my head, I simply came with the name of Khoron Avir, Champion of Nurgle. And I knew I had to do something about it.

Oh, come on, don't put that face. The concept is pure Rogue Trader.

You can see I cut the belly out. This is some serious guy, not a soap opera villain. I'm taking the rotten flesh and tentacles and shit out; I can't bear seeing a putrid belly and pretending it has the same protection than the armour. I have some clear ideas in mind, I'll share as I unfold this conversion.
Next step. If this is going to fight my Space Sharks Force or whatever, it has to be tall enough! I mean, this is actually my first Realscale Terminator attempt ever! Wow, fingers crossed...

We are usd to see (even more in recent times) Nurgle guys with giant maws on the belly, tentacles and stuff, you know what I mean. It's nice (if that's the word), it's daemonic, it's scary, it's distinctive... But it doesn't work for me at some level.
Right, if  we are dealing with some possessed Marine I can see the claws, maws and paws. Whatever, dude. But if we are in front of a Chaos Space Marine, we have to make the right questions. What are they? What is their purpose, how do they wage war, what is the nature of the being I'm about to paint/convert? How does this armour work? How does this weapon shoot?
I'm not sold on the idea of rotten, rusty-to-death bolters or armours, and that's a thing we often see about Nurgle. Sorry, I'm not a fan of the This works because Chaos idea. This is not a daemon prince, not a vessel possesed by a Warp entity. This is a Space Marine. A Chaos Space Marine. He wears an armour, which has to be designed to protect its bearer. And he shoots a firearm, he doesn't fire bolts from his fingers, so the weapon cannot be ridiculously rusty.

Now that you see my train of thought (of course you may disagree!), let's move forward. The weapon. The model comes with this huge axe:

The huge two handed weapon seems odd to me on such a mini. The flexibility and agility you need to wield such a weapon is something I don't see on a Terminator. They are bulky, they are adamant, ready to resist whatever the enemy throw at them. I thought I could use a more traditional approach.

I repositioned the chainfist and randomly added som texture paint on the model, so it could represent rust and decay to some extent. 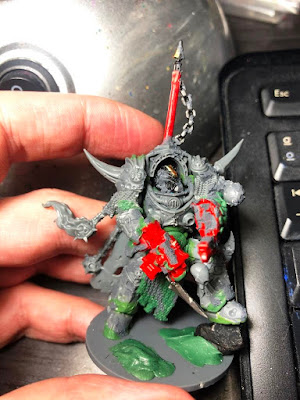 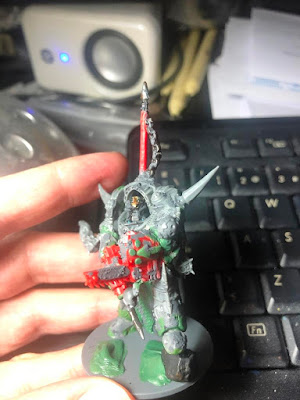 I think I messed it to some point. I'll let you judge. I had a clear idea. I didn't want it painted green, and of course I wouldn't paint it white. I wanted to show decay and the concept of a really old armour with no paint, with tons of damage and signs of rust and stuff, yet functional.
Risky.

I followed the same steps that I used for my Underworlds Sigmarites, trying to get a bare metal effect. So first thing, dark metal:

Maybe this was the no return point. I used a brown/reddish ink. And it suddenly looked awfully metallic:
I went back to the bare metal and tried to add dirt and stuff, but I don't think I got it back to the point I had already achieved. Well. Whatever the case, sometimes you have to admit you kind of screwed the thing, but you cannot get obsessed. You must let it go. Lesson learned, next time I'll do better.
I made my best to solve it, and this is what I got:

I think I may explore other paths for future Plague Marines. Though keeping the same way, I'd like to try an all-brown palette, for rusty metals and so. Well, we'll see. For now I'll let the Champion of Father Nurgle spread his blessings at a planetary scale.
Stay safe!
Posted by Suber at 8.4.20 20 comments: