If you were expecting me to be bringing closure upon any project today... Well, you haven't been reading this blog long enough :D
Instead of that, I'm embarking in a new adventure! Oh, come on, by now you know me, I'm that predictable...

Some intro on this stuff. First of all, I have to say that I have maximum respect for all those concept artists, design developers and all that people who make movies, games, etc. possible. I know it's a hard job and, for each design they get approved, tons of hours of work are simply flushed away forever. Once I've said that, there I go: On The Hobbit movie trilogy, who on earth took the decisions about creatures, costumes, props and all that? Seriously, you can say what you want but, this is not a goblin:

I don't know the insights during the pre-production stage or whatever, but the creatures under the Misty Mountains as shown in the film make me difficult to recognise them as goblins. You can call that a prejudice if you like, but those deformed, warty, harelipped, bulbous beings certainly divert from my concept of goblins. If that makes me a grumpy grognard, let it be.


OK. So I have stated that these are too much over the top even for Peter Jackson's standards. I made my point. Enough rants for a day. Why all this intro? You may remember my Hobbit project. I got the Escape from Goblin Town starter box, so I have lots of ugly deformed creatures that won't be goblins on any of my boards. What can I do? Of course, I'm an optimist by nature, so I always try to take advantage of tactical setbacks like this. They may be awful goblins... but they for sure make magnificent post-apoc mutants!!

That's it. If I added some firearms, they could become nice nuclear wasteland dwellers. I immediately went for my GW Skitarii box...


A friend suggested I could make a Hrud warband for WH40K. How cool would that be? I could adhere to the old concept latest seen in the pages of the WH40K3 Rulebook... 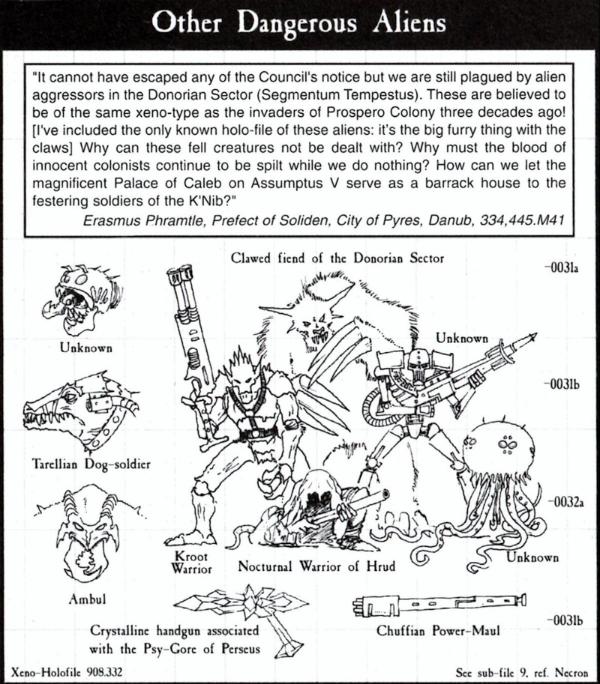 Those were the days when Hrud were conceived more like Space Skavens. But after the release of the Xenology book that changed. A lot. 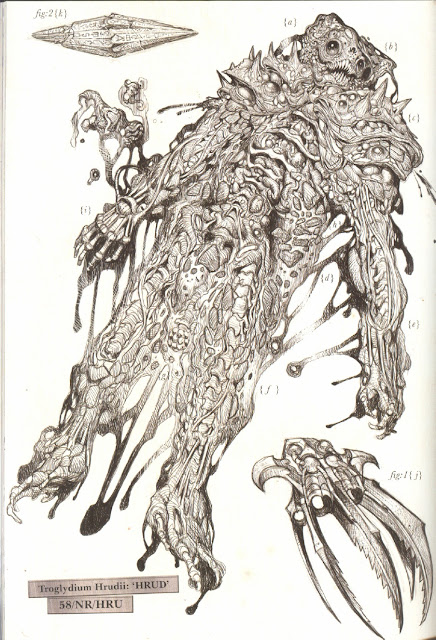 So I had second thoughts on that. Besides, quite recently, the most awesome Asslessman from Leadplague has achieved this absolute marvel: Space Skavens, taking the old Jes Goodwin sketches as reference. Seriously, pay him a visit, the blog that never disappoints.
Then I turned back to the original concept. Mutants! Mutants with guns are as important as underrepresented in WH40K. If I got some ugly people with guns they could serve as wasteland nomadic traders or whatever, not only in 40K settings, but any post-apoc or different ambientations. My first approach looked like this: 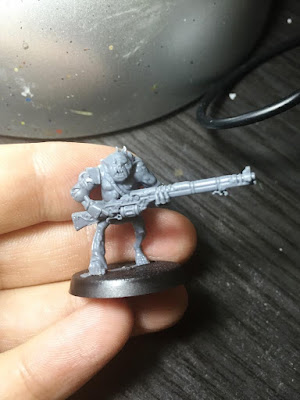 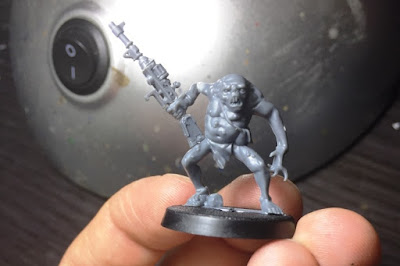 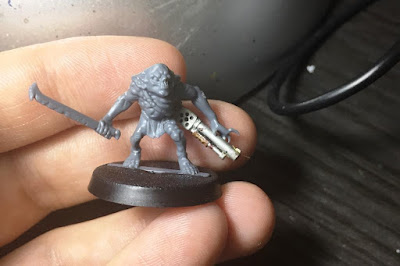 Still in early stages, of course, this is just a cut/paste of bits, but I have the first handful at least oriented: 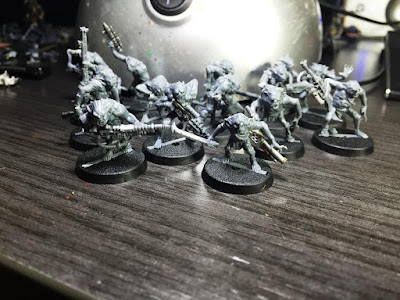 I've begun to greenstuff a few of them. Long robes and stuff. I need to add some shoes or something; if not, they'd just look like ugly men in their bath robes. 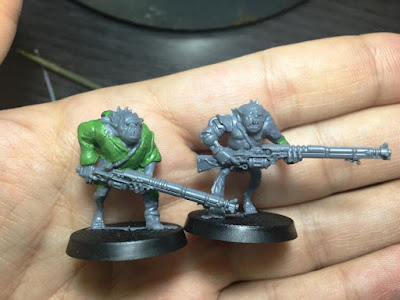 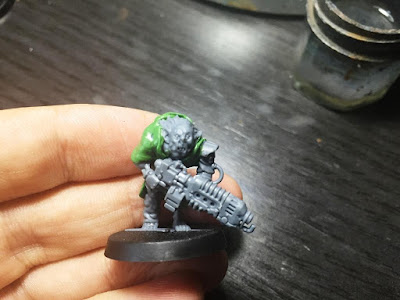 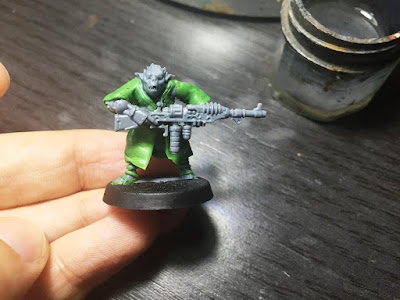 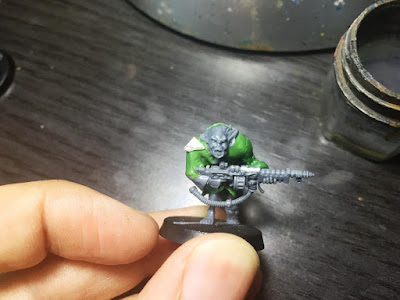 Of course there's a loong way ahead. Goggles, breathers, wires, tech stuff... I don't want to abuse of skulls, but maybe they're in order here. I don't pretend to uniform them; some will have robes, some will wear nothing but their ragged clothes. I'll also use some Dark Vengeance cultists heads as well as Skitarii robed heads. Let's see where this goes.Wish me luck, this is gonna take some time!!
Posted by Suber at 26.6.16 24 comments:

Some more stuff for my HeroQuest project. Two on a row, wow! Among the Hasslefree ranges I found a wonderful Chaos Lord. As my previous original HQ Chaos Warriors were painted in black, I thought it could be a nice chance to make something different and pour some colour on. I d't take too much risk anyway, I went for classic red.

So this was like he was supposed to look:

But I must confess something. I didn't feel comfortable with it. Not at all. This is one of those things that I see other people master but I can't make it work. Honestly, I've seen other people's Chaos Warriors in every colour imaginable and I drool all over. But I made this one and felt totally clumsy. Ouch.

So I came up with an alternate solution. What if I tried brass?


The brass look works better for me. The pics look too gritty and dirty, but in hand transitions look smoother. Don't know, maybe I have the image of Mordred fom the Excalibur movie way too attached in my mind, but I kinda prefer this metal approach rather than the coloured stuff. Ahhhh, when my Pantheon of Chaos KS minis arrive I guess I'll have another chance to see what I dare to do...
Posted by Suber at 19.6.16 20 comments:

It's all about the face

I know there might be some controversy here about these minis and not everybody will like them, but the fact is that, as I saw them, I just threw my money at the screen. Otherworld released some pig-faced orcs, very D&D style. I was kinda tired of the ubiquitous GW style Orc that almost every single company has adhered to (particularly the horrendous current ranges), so these minis brought some childhood memories and decided I needed a few.


I know these can be controversial to somebody. Definitely not the usual orcs we are used to see these days, and I believe neither the orcs Prof. Tolkien envisioned back in the day. They belong to a very particular view of orcs and, but I must say I love them.

I'm of course using them as part of my never-ending HeroQuest project. They have the right balance between menace and goofiness... They look just great for dungeoneering!

Browsing through the internet, I also found this beautiful beast from Hasslefree (had I ever said I love Hasslefree?)

I immediately saw him as the boss for this bunch of orcs. I thought of sculpting some armour on him, to make him more lookalike, but when I came to it I realized he didn't need that. The mini is terribly imposing, there was no way I could improve it with my sculpting skills. So I had a perfect leader.

I really enjoyed painting these. Though they are quite different in sculpt and scale to other orcs I already have, I think I'll have no problem in combining all of them. Different breed of orcs is always good for project depth :D

I had my eyes set on Crooked Claw goblins, but now that the shop is closed I need to look for altenatives (or hope anyone has bought them and wait for a re-release!)
Well, at least you can see, my HeroQuest project is still alive!
Posted by Suber at 12.6.16 16 comments:

I may have already told this, I don't remember. Just in case: My original plan involved having my Imperial Assault finished by the release of Ep. VII. By now, I'm quite confident of having it for the Rogue One Episode VIII release. Maybe.
Ahem.

Today let me show some apparently easy stuff that proved challenging in the end. First of all the Probe Droids. Challenging? How could these models mean any problem? You just had to paint them monocrhome, that's all!
Sorry. By now you should know it's not that simple. Oh, well, that proved right for the first model:

But I couldn't have three identical models! Could I? The problem here was how was I supposed to innovate in any way with the most static minis ever. My only chance was repositioning the limbs:

The third one was the real challenge. What else could I do after that one? I'm afraid I took too much risk. I tried to depict it in the precise moment of leaping on its prey, so it should look really dynamic. But...

Anyway, here you have the three of them:

The other kind of model I chose was the Nexu. Another almost impossible to convert model. Given the circumstances, I thought this was the best apporach I could take:

So here's the two of them: