New couple of pages, we may be getting to something... 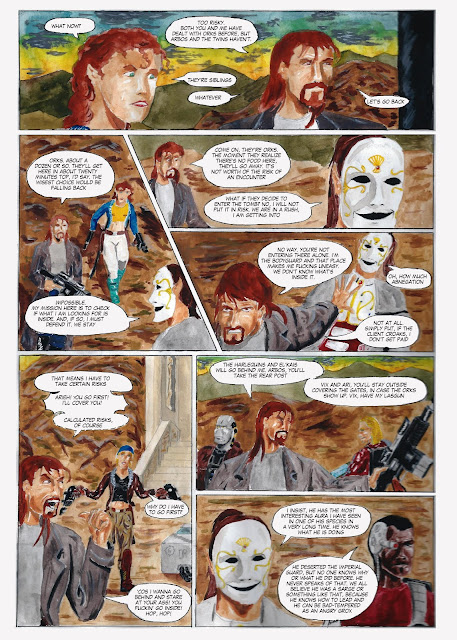 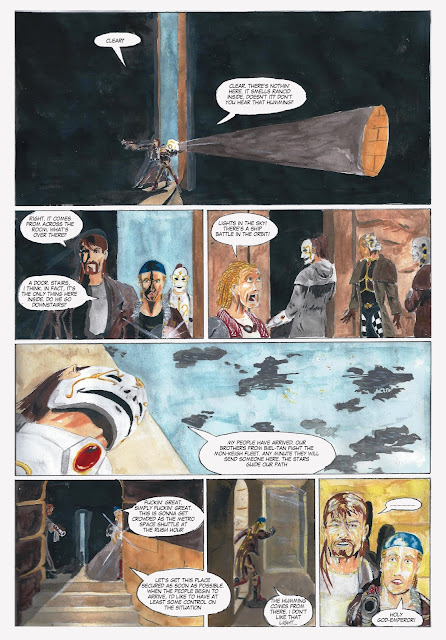 One of the things I was sure I wanted is the group being portrayed not as a bunch of no-sweat badasses able to cope with anything in the Galaxy, but rather as a gang aware of their self-limitations in this, you know, grimdark galaxy in which life is so fragile. These are not Stallone and the Expendables. So if a group of Orks is approaching, the wise move is a retreat.


But well, the whole point in a Warhammer universe is conflict, so we need our heroes to pew pew a little! (Remember, my idea was a growing climax throughout the whole series, from RPG/small skirmishes to full scale apocalyptic battles by the end of the story). This also serves to know a little more about Brent, we can see him as a group leader making tactical decisions, and we even get a hint about his past (would it be true?)


If things were not warming up enough, we also get to see that the Eldar fleet has finally arrived as expected, to accomplish the Great Harlequin's purpose (whatever that is), just in time! If they manage to break the Imperial orbital blockade, we may get to see some pointy ears in a few pages (spoiler alert, of course we'll do).


But before that happens, if you have to judge for Brent and Arieh's faces in that last panel, there apparently  are a few more surprises to be unveiled...

Yet some more World of Twilight!

That's right, I have some more advance on this side of the workbench :)

This time I chose a group of similar minis, which is always a good way to move forward. They all are small biped mounts, the last I had from this bunch. First one is Tanaris Zelehn, the Herder Queen:


The other two are Enuks, tiny (and beautiful!) beasts of burden. I treated them in quite a similar way, in warm colours and a variety of  bags on them.

They all are quite adorable! Here you have the three of them:


I still have some minis left (my mate and I did made quite an order, hehe), but I can say I've already gone through the main part of the project (at least of the project so far!)

We have officially gone through half of Volume 1 now. Confetti!! 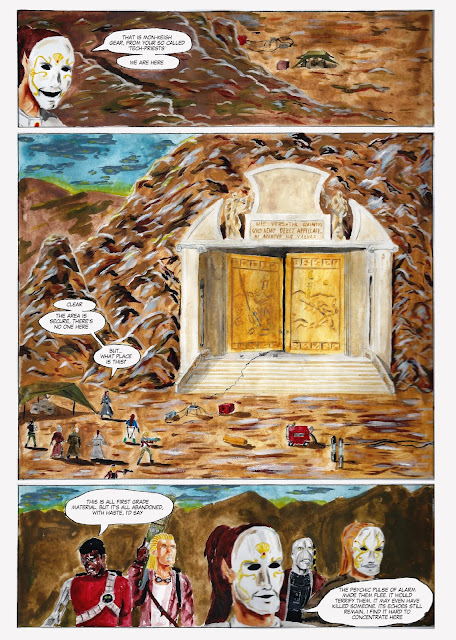 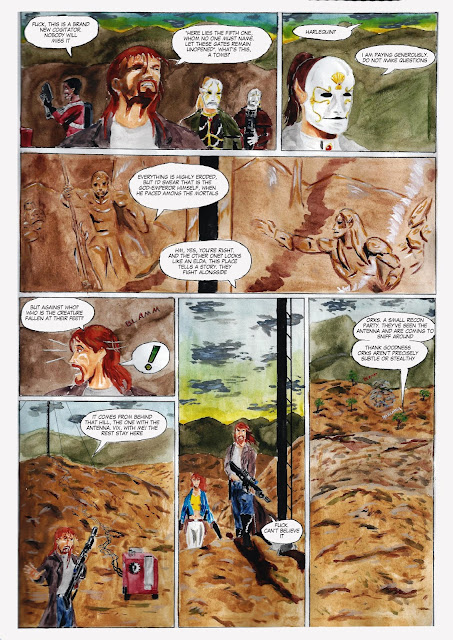 Well, OK, I'm no Bernini, sure, but the entrance to the sepulchre does its part. I have later regretted the aspect of it many times, but didn't want to redo the page. I wanted to represent a 'classic' Imperial monument from the early Emperor times, so nothing gothic or too shabby/square, but more delicate, in a Renaissance way. I don't know. Now I don't see it as such a good idea. I think it needs to be much more massive/impressive (you'll eventually know why, hehe) and in a totally different architectural concept. Anyway, this is how I drew it and so it stays!

But the real news here is that we're gonna have some greenskins soon! This is getting entangled...

Descent on a budget: Cardinal Koth

The Easter break has been productive family-wise talking, but not that much in painting terms, hehe. However, I have managed to add a new character to the Descent project. Today it's turn for Cardinal Koth.
Not much is said of him in the Adventurer's booklet. The heroes must aid him when the baddies assault the cathedral he's in. He bears the 'Staff of Light'... and that's pretty much all we get to know!

The mini of choice was this one:

The robes and the stuff were of course critical, but he seriously needed a head swap. OK, OK, nowhere in the booklet it's written that the Cardinal has to be human, point taken. Anyway, I think it would be better. Ahem.
I used the discarded head in Sir Alric Farrow mini. Only a beard had to be added to disguise the part where the tentacles were, as well as a skullcap, to reinforce the ecclesiastic look.

Easy paintjob, I chose white for the robes and red for the lining, nothing too complicated.

Quite simple and time-efficient, so I couldn't ask for more. He makes just a quick appearance in the game, but I pretend it to be suitably 3D, not with a card token :D

Well, little by little, this project is taking shape, we already have a few minis! Phew, now for more stuff!
Posted by Suber at 17.4.17 10 comments:

More tons of text as promised! 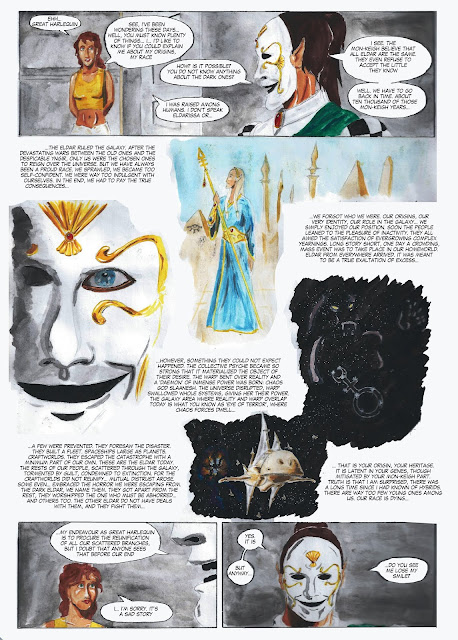 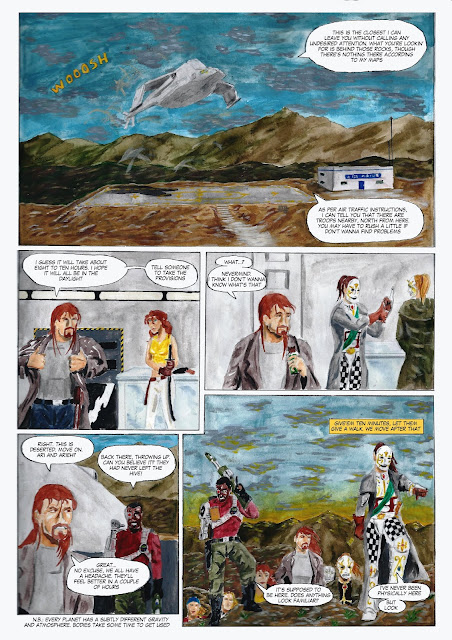 I had clear in my mind from the beginning that I didnt't want just a pew pew comic strip. I wanted some more depth. You noticed it last week with the Eldar myth, and you can see it again with all this Eldar lore in a nutshell. Once again it was part of the 'must know' to fully understand the whole story without the reader having to consult other sources. Now we know of the Eldar diaspora and the Harlequin's role in the big scheme. That would prove useful when different Eldar factions made their appearance in the future (spoiler alert: unfortunately that was never achieved, sigh).
You can also get a glimpse of my own interpretation of a Craftworld (we'll get more of that in the future), the Eye of Terror and even why the Slaanesh symbol looks like that. The constellation nonsense was just a dumb idea I got out from nowhere, but I found it fun, and was quite visual too, so... there it stayed :)

The second page takes us directly into action. We see our people finally descending on the surface of Itabirion and getting into the place where we wanted to go from the beginning.
Once again you can see my obsession with stupid details, such as the twins having to adapt to gravity and atmosphere (why is this subject always avoided in movies? All planets are exactly the same, with millimetric precision! No matter if it's Star Wars, Star Trek or whatever, they all can harbour life in the very same conditions. Boooring). I also planned to talk about vaccination and other stuff, but the story asked for some action.
You can also see my footnote system. Unusual for comic language, but useful for my purposes. I really wanted to implement the Jonathan Strange & Mr. Norrell novel footnote system (what, you haven't read it? Go now!!), with such a delightful metanarrative process. I had some ideas of inner stories within the story that would have given some strenght to the narration. I think you'll have the chance of seeing maybe one or two.

This is it for today. More adventures anytime soon. Cannot tell you what's going to happen, but I can give you a hint. If you are familiar with storytelling expressions, I'll just say that I don't have a Chekhov's gun... I've replaced it by a Harlequin's Kiss ;)

You may remember the Victorian Gothic Horror minis I painted for a friend as a replace for his Fury of Dracula game a few weeks ago. Well, after some productive discussion about the bases, we decided they needed some additional work, as they had too much colour. I came with the idea of some kind of Victorian-like trimming, which still allowed to see the colour but made the bases quite more discreet. So this was the result:

But what's the reason behind this colour obsession? Easy, so my pal can also use them for the A Study in Emerald game, in which the agents are colour designated. But that game has some characters of its own. Using the same West Wind Productions Empire of the Dead minis (and the same approach), this is what I can show you. First of all, elementarily, Sherlock Holmes:

But what is Holmes without Watson?

For Moriarty, my pal and I both agreed that we wanted something different, something more lighthearted among all this grimdarkness. That's because we both had this in mind:

Well. One thing I discovered is that light lilac doesn't work for a suit, no matter what you do. So I dressed him up all in cream/white, and added some purple touches to stick to the original source:

We also have another two agents. With no special idea in mind (i.e., not thinking of particular characters), I simply painted them in what I thought would look in place for the ambientation:

Here you have them all:

There's only one piece missing now in this dual-purpose project, the vampire himself for the Fury of Dracula game. I've already placed an order to Otherworld, so I'll let you know when he arrives.
Project nearly finished!
Posted by Suber at 10.4.17 20 comments: 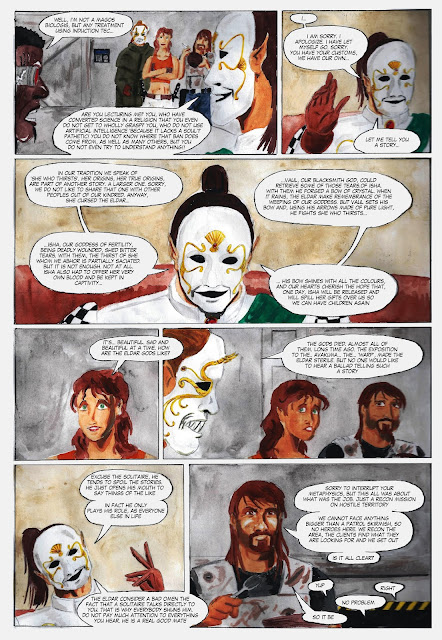 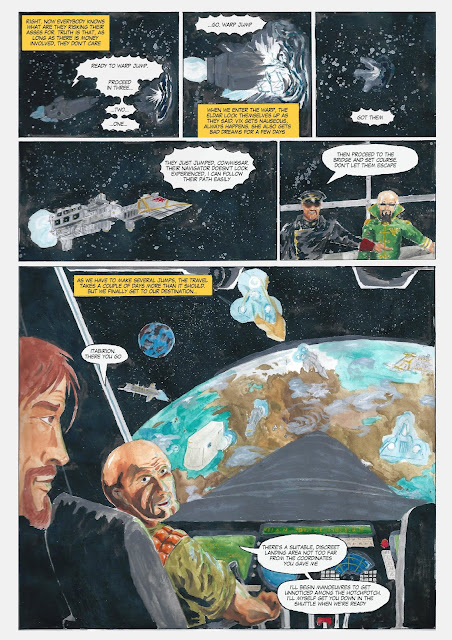 This is both a transition scene and a walk through the Harlequin's personality (as well as a kind of look into Eldar culture). The whole myth the Harlequin tells is my invention, nothing official (don't go try to find it in any Codex!). I wanted to use a reference to the Tears of Isha and came with this story, mixing it up with the origin of the rainbow and the hopes of Eldar. I don't know, it all sounded Elvish enough in my mind, and the Harlequin needed something in this fashion so the reader didn't get the impression of him being 'generic character #4'.

It works the same for the Solitaire. He is supposed to be the quiet character, but I didn't want to make a gag of him, a Silent Bob cliche. He for sure can speak, but certainly chooses to do not so, unless he has something ugly to say. This was also the chance to make you know that being addressed by a Solitaire means bad luck (this is indeed official fluff).

About the second page, just a quick reminder that the Imperial authorities are on the chase! The touch about the navigator being inexperienced was something I specifically wanted to make into the story. I'm so sick of the good guys being just outstanding in everything they do. It happens all the time, everywhere. This group is not about that. They have limited resources and make mistakes. I of course have to stick to many narrative conventions (which aren't bad by themselves, in fact they are necessary sometimes), but I like to do different things from time to time.

Well, this is it for now. Get ready for more unconventional stuff soon ;)

The crazy thing of being involved in several projects at a time is that you hardly see real progress on any of them. However, I still find it stimulating. I mean, that's for now. One day I'll wake up and decide to fully commit myself to a single thing until I got it finished. But until that day arrives, I'm coming back to Descent. Today, Lady Eliza Farrow.
All we get to know about her is that she's a fancy vampire lady, so the mini of choice was this one:

As we didn't really need Vampirella to steal the show, I thought of a closer approach to the original illustration, i.e., a highborn looking lady with a taste for death. Or undeath. Whatever.

I made the dress with greenstuff and redid the cloak. I also thought that the orb in her hand could be repurposed. I cut it in two and made a goblet out of it:

Ony after I had finished her I realized with horror that I had painted a vampire Elsa (ouch!)

Sorry, but we are sticking to what it's been made, no repainting for now. I guess she can be used for Frostgrave or something too... :D
Posted by Suber at 3.4.17 18 comments: