Evolution of a force: Adeptus Arbites

Hi there! Back to 40K again. Today I'm bringing you a compilation of pics showing how I begun to build up a force of Arbitrators. For all those non-warhammerers, Arbitrators are just the Judge Dredd concept taken into 40K. Law enforcers who deliver judgement upon criminals and heretics Imperiumwide. You know, hard stuff for the dark millenium.

In the beginning there was the core :P


And the core was of Arbitrators, and these Arbitrators were the core of my upcoming force :D
At some time I saw this conversion work by mighty Mike McVey: 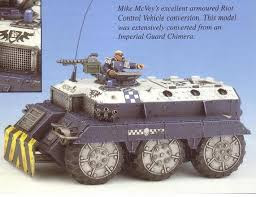 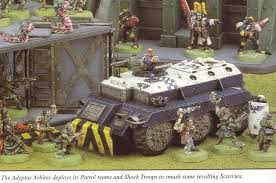 It is a converted Chimera, as you may have spotted. But of course I could not be satisfied at all with this, so I had to repaint it. Arbitrators need black gear. Don't ask me why, but these guys really need ominous colours.


So I had a small bunch of cops and a van. Good enough for a start. But, as you can imagine, not enough at all. By that moment I had already read the first book of the Arbites' trilogy and I was totally hooked by the leading character, Shira Calpurnia.

I needed some more Arbites. I traded for some minis and I finally got enough models to build up two squads, one with shotguns and one with bolters. The main problem was the Judge (the leader of the squad). I couldn't have twenty different minis, but at least I would not have two identical Judges. I converted this one who was to lead the bolter squad:

So this is what I got:

Hmmm... What else could I add to my force? A model I'm in love with. A Forge World's Arvus Lighter. Let me show you the pain in the *** process.


The aspect of this flying shoebox ship begun to be like this:

Once you put the wings on, this is the final aspect of it:


So this is my current Arbitrator force!

After all this mess, I painted a few Arbites for a friend. I'm only posting here the conversions on the Judges (the rest of the minis are just the same!)

Here it is, Team Arbites:

Once I have shown you all this, I must say I bought the Necromunda Arbites, but have not painted them yet, and I really want to, the set includes one guy with riot shield and a K9 unit.

Oh, all this deserves an scenario. Or two. Or a full campaign! Agh, too many projects!
Posted by Suber at 13.1.14