Happy new year out there!

I hope everyone's doing good. I'm slowly going back to routine, and I managed to finish some more RT minis. They essentially are the same kind that the latest post, though more on the military looking side. Let's see what I got!

First one is the wounded guy:

Though being obviously Imperial Guard, I didn't want any of these minis to look specifically military or uniformed. The idea of these mercs or adventurers being old veterans keeping the fatigues seemed nice, so I worked with that. However, I consciously avoided camo patterns and opted for plain colours.

This pirate is the most distinctive from this batch, I think he belongs with the minis from the previous post better, but well, I painted him along with these. I made him more colourful, with the yellow pants and red suspenders. Maybe it's part of a torn out hazmat suit or whatever!

The heavy stubber (or whatever that weapon is!) Guard was a mini I had been wanting to paint for years. It's of course a Vasquez kind of mini, I enjoyed her a lot.

I went a little more wild on this one. I clearly avoided any kind of military uniform and painted the vest red. He has a camo net on the head, but I enforced the techno-barbarian appeal of the sculpt and painted it as a chainmail, like he was wearing some kind of aventail. Kind of crazy, but if I believe it strongly enough, it will work.

Well, let's go back to a little more orthodox way of doing things. I had this Commissar and painted him as... well, a Commissar.

Here you have all of them: 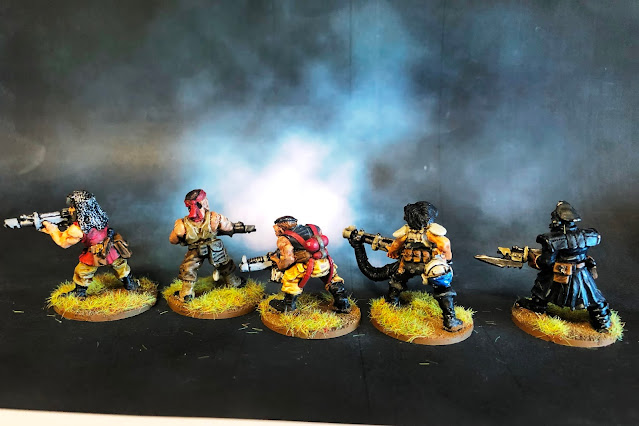 Having painted the Commissar, it made me think of many things. First of all, that I could put these along the previous minis and make some kind of Dirty Dozen out of them, in a Col. Schaeffer's Last Chancers way of things. I think it could be fun.

The other thing I thought of is how much have Commissars changed through the years in terms of design. That made me recover this other Commissar I had in a box and repaint him:

I'm not sure of when this mini was released. Maybe during 3rd Edition? I'm not a huge fan of the Hussar theme on Commissars, but I love this particular mini and the badass attitude. It's maybe one of my favourite Commissar minis of all times (Hmm, I had never thought of a favourite Commissar. Oh, now I have to give it a thought!)

See what I said about the evolution of Commissars:

This will be all for today! 2021 has officially started!

I don't really have any new year resolutions or specific plans for painting anything. I know I want to do some things, sure (The Gargant, the mining village, RT minis... the list could go on and on), but I'm more keen on painting whatever I'm in the mood for at the time and just let myself go.