Yeah, I know, Shadespire is so last year, now it's all Nightvault. Who cares. I don't think I'll be changing the label now. This blog is oldschool and I'll take the consequences. Shadespire it is.

Another commission for this game. The sigmarites of the core box!


Right. You may remember I used a WH40K Grey Knights halberd for my own band. The idea got stuck in my mind, and I thought that a band with halberds/spears would look nice. Come on, the pose of the first guy is asking for it!

My pal asked for something totally different than the previous stuff I had made before. He wanted living statues, in the fashion of D&D animated armours. There are some references of other people out there on the internet, but I chose not to look for them and make my own way. I asked my pal what kind of stone would he like to have and just looked for stone references. Seriously, my browser historial is now something worth seeing. Ahem.

Bases were an issue. I didn't want them to look exactly like the statues, to avoid confusion. They needed to be chromatically different, even if they were (necessarily) similar.

The final steps involved some ivy. Not only it reenforced the old statue idea, but it also fit into the own bases theme. Autumn, decay, life struggling over death, among these strange rocks. 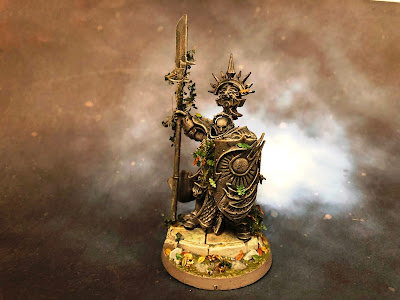 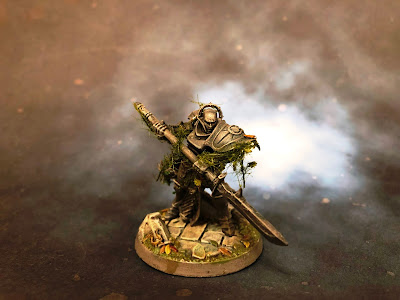 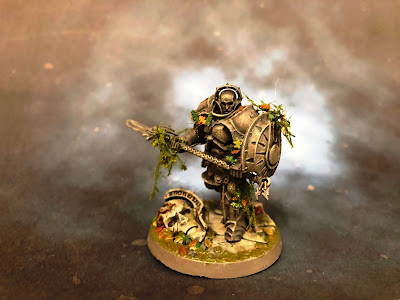 That idea is reflected in the colours. The stone itself, the leafs. I tried to show quietness and ease, but some strenght and menace at the same time.


You may have noticed the back banner on the boss belongs to another set of Sigmarites. That's because I'm also converting other kits in the same fashion for the same purpose, so I'm sharing all their bits at the same time! You can expect more statues coming soon!
Posted by Suber at 11.2.19