Sometimes you begin a project almost out of nowhere. You see something, a piece, any unexpected bit of rubbish, any everyday object, no matter what, and then you see it. You envision a totally different thing. This happened to me recently. Earlier this year I saw a very particular pen holder at the office. Great thing to keep pencils and markers separated, to have your post-its or whatever. Sure. But I saw a different thing.

The shape of this thing immediately resembled me a space ship. I know, I know, it's not the standard thing any normal person should see here, but in my defence I'll say you should see how I perform at Roscharch tests.

Anyway. A space ship. In 28mm. The curved part would be the prow, the bulkier part would be the main hull section. Please let me, if not elaborate, at least show. First of all we'll need some medium-rough cardboard.

The ship is too short now, so it needs some length. I made an extension at the stern, in which I also put the rear cargo ramp. Cardboard is kind of underrated in the hobby. It can provide some decent structures with very little work and it's easy to handle. So I made this weird box and it somehow worked. Not only that, it allowed me to make a curve shape on the top part, so I felt quite encouraged to keep on.

I got this textured sheet and cut these two pieces:

I had to fill in this empty section between the two main shapes, so I thought it would be the right place to put the access doors. So what you are seeing is just the step in front of the door.

I said that working with cardboard has some advantages. Here you have, I thought I could make some portholes for the ship:

Here! This is roughly the basic shape of the ship!

Let's go for the "roof" of the main section. This time I needed a thinner cardboard piece, to adapt it to the curved shape:

I hope you can see the general idea by now! The next stage would be the pilot's cabin.

I toyed with the idea of assymetry and having the cabin on one of the sides, but in the end I thought it would work better this way.

Oh, because I expect it to be seen!

I cannot honestly remember where did that piece come from. I only know I have been keeping it in my bits box for more than two decades. Quite literally. I had always planned to add it to any weird project, but in my mind I always thought more of giant robots or something like that. I have finally found a place for it! Horaay!

The piece is translucent, so in my mind the original plan was to make some detailing in the interior, but not too much (spoiler: there will be a change of plans ahead, but we'll get to that later...)

As the canopy is supposed to be translucent, there's no need to make a super detailed area. I can make it a little bit crude or rough.

So now that you are following my train of thought, why bother adding tons of realistic details? If it's not going to be really well seen, I can simply paint the stuff instead of building it!

For the pilot I took one of my old sci fi civilians and made a slight conversion. Again, a crude work, having in mind the translucent canopy. So it's a relaxed guy, with his thermo flask, clicking all those buttons pilots click on the movies.

So this is more or less the general idea and the basic shape of this space ship:

Just an idea. If the Millennium Falcon is a light freighter, this tiny thing is kind of the equivalent of a cargo van!

Let's keep on. After many ridiculous and unsuccessful experiments, I finally found the way to add a couple of engines.

Well, from now on it's all a matter of adding details.

I made a shy experiment with metal wire, but I wasn't really able to make it fit the shapes of the ship, the engines and so. Then I made the easy solution:

Final stage: the landing gear. No sweat, just give me some more cardboard:

They are sturdy enough for their purpose. In fact cardboard offers a lot of solutions for many problems. As said above, it's so underrated!

Here you have, the finished ship!

It's shabby, I'll give you that, but that's precisely part of its charm! I mean, it's kind of a trope itself in sci-fi, the old, ugly ship, on the edge of being sent to the scrapyard. Oh, now I'm perpetuating cliches!

Whatever. Let's get some paint on this piece of junk!

Time for an embarrassing confession...

Right, I'm wild crazy enough to do that. I thought that was already settled by now. So, some hours later...

I'm keeping her in a kind of dark-ish scale of colours, but I don't want to go too dark (or even worse, too grimdark!). In fact, don't you think she looks like... like a...

Dammit, I cannot unsee it now.

I painted the rear ramp, as it was too dull:

Some more colour! And a few decals!

OK, now I faced an unexpected problem, that in fact made me take a different path and change my original plans. I tried to clear a bit the translucent canopy, in order to make it a little bit more transparent. I read that brushing some toothpaste on the piece would do fine. So I tried!

Then, science is based on observation and experimentation. Trust me, I had my share of science (sigh). The good part of this is that the canopy now smells great! I won't need to sculpt an air freshener to hang from the rearview mirror!

Of course this all means that I needed to take a different approach.

My only choice was painting it all as if it was glass. But, as shabby as the interior of the cabin was, once it was done I really didn't want to cover it definitely and lose the whole piece. So I made my choice.

Of course if I was doing a detachable canopy, it had to be detailed in the inside!

Then the outside. My recipe for glass is quite easy. Dark blue and then lighter hues to make reflections.

I also added a small HUD on the pilot's desk, some kind of holoscreen.

Here you have the space van from different angles. If you look closer you will see my usual signs in Gothic. Aeris ductus (Air intake), Cave pedes (watch your step), Non gradere (no step), Cautio (Caution) and this time I have added Abite (Stay away) on the rear ramp. 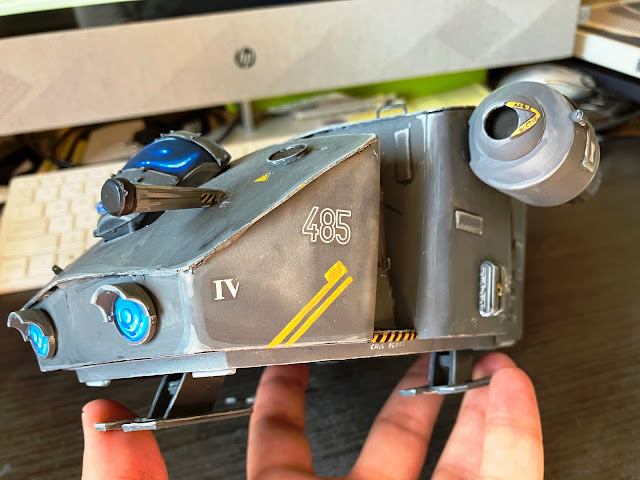 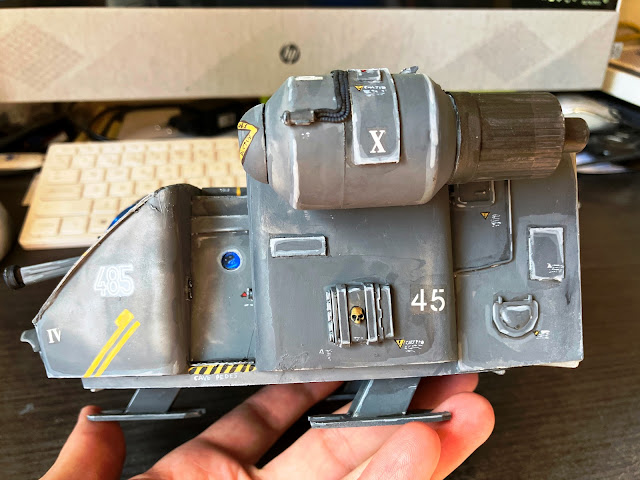 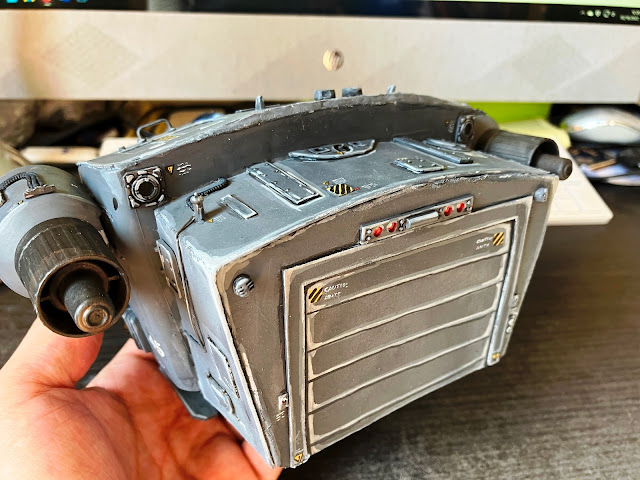 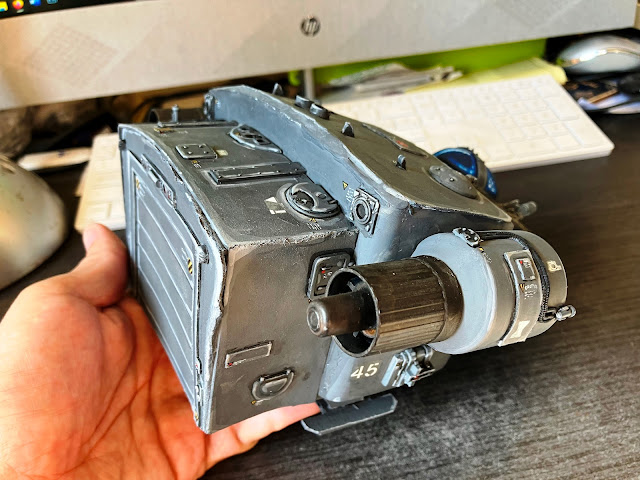 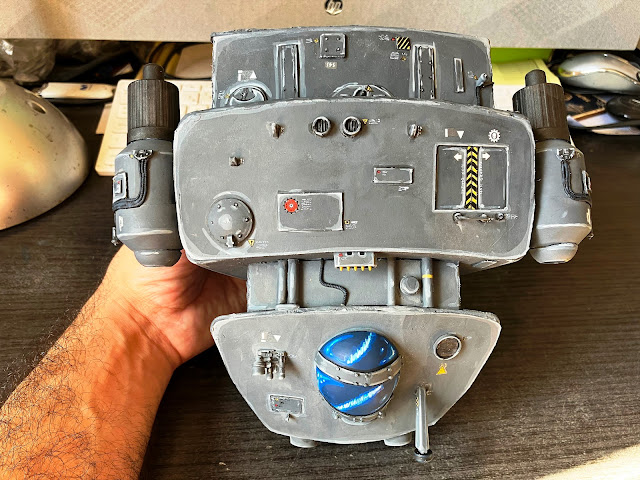 There's little else I can add. Just a final pic, as I have come to a terrible revelation...

Oh, well, a final pic. A final, final pic, this time it's true. Just to see the size of the ship, a comparison shot:

That's all! I believe I have to give the ship a name. Being a chibi Serenity, I don't know, I guess the Calmy could be an option. The So-so. The Easy-ish. Oh, I guess I'm better taking your suggestions!! :D